Late last week, Yahoo confirmed that it was shutting down Yahoo Maps at the end of June. The announcement, which was made in a product report for 2015, also highlighted the closure of several other products, including Yahoo Pipes:

As noted above, Yahoo Maps will not be going away completely but will continue to be supported in the context of Yahoo Search and Flickr. We expect little change in terms of local business listings, and map-based results will still be around, they’ll just no longer be supporting Maps.Yahoo.com.

There has been a lot of discussion about the announcement, including speculation about what it means for Yahoo going forward, and what if any impact, it will have on the local search industry.

To better understand how this decision was reached, and what factors have caused it, we reached out to some key industry figures for their thoughts. We’d like to thank Mike Blumenthal, Casey Meraz, Phil Rozek, Andrew Shotland and David Mihm for sharing their insights below.

End of the road for Yahoo Maps

Following Friday’s announcement, there has been a fair amount of comment, but also a sense of inevitability & even indifference about the news, with many citing Yahoo’s perceived ‘irrelevance’ & lack of activity in developing its Maps product.

Although the announcement has not been a surprise to many, Phil Rozek told us that the time has just never been right for Yahoo and ‘Local’:

“When Yahoo was peering down its nose at an upstart Google, local search (at least on the map) wasn’t even a thing yet. Then the tables turned. By the time “Google Local Business Center” showed up about 10 years ago, Yahoo was a distant second in terms of general search engine market share, and in terms of selling ads”.

Despite this, David Mihm reflected on lost potential from Yahoo, noting that in his opinion, as recently as 6-7 years ago Yahoo was the premier mapping UI, highlighting its innovative map, centroid ‘personalization’ & early adoption of being able to sort by “top results”, “distance”, “highest-rated”, etc. 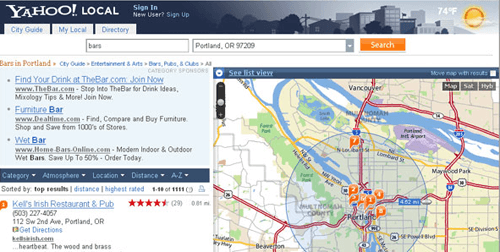 So if Yahoo was in such a promising position a few short years ago, how have we arrived at last week’s announcement?

A time for innovation

As Casey Meraz told us, “Yahoo lost the battle with Google & Apple because Yahoo Maps never really evolved. It was really just search engine based. It’s been “dead” for quite some time and it never kept up with the times”.

Apple is making well-documented progress, but over the last decade, Google has dominated. Google has claimed to be on a “never-ending quest for the perfect map”, and with billions of Google searches being made each day, and with one of the most widely used smartphone apps in the world, it is very difficult for Yahoo to compete.

Phil Rozek commented, “The reward for innovation and for getting more local businesses on the map was higher for Google than for Yahoo, so already-bigger Google kept building up Maps and its self-serve listings-management feature – which I will always call Google Places. Business owners and customers paid more attention to it than to Yahoo”.

This video from 2012 shows Google’s 10-year commitment to developing their Maps product:

Google rarely stands still; as recently as last week they announced that “Maps is making it easier to track your transportation”, with all new real time public transport updates. Apple have been trying to chip away at Google’s dominance and have recently announced the addition of transit directions to iPhone in iOS 9.

Mike Blumenthal echoed the feeling of inevitability about the announcement;

“In mapping and directions Yahoo has played a distance 5th in a crowded market to Google, Apple, Mapquest, Here, etc. and it is likely that the income & traffic from mapping per se did not meet their goals”.

So lack of innovation & strong competition have held Yahoo Maps back – but why didn’t Yahoo develop the product? Was it a financial decision?

Andrew Shotland noted that “it costs a lot to build and maintain a global maps product”, and told us that it was clear Yahoo has been de-emphasizing investments in local;

“They, like Mapquest, CityGrid and others, have outsourced business listings management to Yext most likely because they couldn’t / wouldn’t support the investment required. Maps likely requires considerably larger resources”.

Andrew continued that, “Yahoo is under a lot of pressure to focus on growth of ad revenue, and while Maps could be a big monetization play, it probably has negative near-term ROI which Marissa can ill afford”.

This leads us back to the appointment of Marissa Mayer as Yahoo CEO in 2012. Shortly after her appointment, Marissa noted that Search is a ‘core priority’ at Yahoo, but they weren’t planning any significant investments in local in the near future (her predecessor Carol Bartz had already outsourced maps to Nokia).

Since then, the company has realigned resources as it refreshes various products, and shuts down those that have become stale. Last year, it was the Yahoo Directory – an original from 1995 – but there have been many others. In total, Yahoo has discontinued over 60 products in the last two and a half years.

It is because of this that there is little surprise about Yahoo Maps. David Mihm tweeted that it was only a matter of time before Yahoo shut their mapping product down, commenting that they gave up on local search a long time ago, outsourcing maps to Here and business listings to Yelp.

David told us, “Mapping is obviously an incredibly complicated, expensive endeavor that requires a degree of exactitude that’s difficult to get right (see: Apple, 2012). Unless there’s a major executive commitment to it, it’s doomed to fail”.

A major drawback is that Apple & Google both have a strong smartphone presence, which Yahoo clearly doesn’t have.

As Casey Meraz emphasised, Apple Maps is the default app for iOS devices, and the ‘next best’ alternative option for iPhone users is Google:

“Since search is now so localized, users are using their mobile devices for map searches. If you’re on android you’re pretty much using Google Maps or Waze (owned by Google) and if you’re an Apple user you’re using Apple Maps, Waze, or Google Maps. Yahoo had such a small percentage of this because they never kept up with it”.

Andrew Shotland, who earlier published that Apple Maps is being used regularly by at least 61% of U.S. iPhone owners, added that “Yahoo does not have a strong mobile play such as iOS or Android where it can justify maintaining Maps as a key tent-pole to support a broader mobile platform”.

It’s clear that Yahoo’s failure to keep investing in Maps – after a bright start – meant that it lost too much ground to it’s competitors, which it could just not claw back.

Also, Google’s stellar growth & ultimate dominance in search meant that it had the resources to fund an extensive local & maps service, and simply outspent Yahoo and many others.

The final nail in the coffin was the lack of a dominant mobile play which could have given Yahoo access to a massive & growing user base & would have put ‘Local’ front & centre on their roadmap.

But as Phil Rozek noted, whilst painting Yahoo as the ‘Fredo Corleone‘ of the local search Famiglia; ‘it didn’t have to turn out this way‘:

“If Google didn’t clobber Yahoo in the general search game as hard and as early as it did, Google and Yahoo might have exchanged blows in the local ring for longer”.

“But Yahoo still could have innovated – in general, and especially in the local space. They could have done better than ape Google’s knowledge graph. They didn’t have to abandon people who just want to fix their free listings. They didn’t have to throw business owners under the bus when they started sourcing reviews from Yelp”.

With these comments, Phil perfectly captures the feeling of animosity towards Yahoo from some commentators & also highlights the fact that so many local SEOs simply don’t care about Yahoo.

Phil even suggests that with the exit of Yahoo Maps, rather than changing the landscape for local business owners & SEOs, it will simply serve to reinforce his position that “you simply won’t bother with Yahoo”.

What does it mean for local search?

Maps will of course go, but Yahoo local business listings will remain in place. That side of the business is to stay & the dataset will still be used. But what does the demise of Yahoo Maps means for local? – if anything.

With Yahoo Maps gone, Phil Rozek hopes that Apple and Facebook get more serious about “local” than they have done in the past, if only to spur on Google further:

“They’re sleeping giants. More competition might just get Google to start innovating and improving in the local space again – rather than just renaming it and dickering with the buttons every other year”.

Casey Meraz echoed this statement, and said, “it’s important that markets still pay attention to other map-based services like Mapquest. I also think we’re going to see major growth of Apple Maps in the coming year”.

Most of the experts agree that Apple Maps is set for a big year, but David Mihm thinks the announcement will have little impact on the local search industry as a whole, suggesting that “Yahoo Maps usage had dwindled to nearly zero anyway”.

The last statement touches on a rumor that Greg Sterling mentioned on a post about the end of Yahoo Maps and the missing local strategy. Greg wrote about rumors of an acquisition of Foursquare – or even Yelp – but they are simply rumored at this stage and there is no suggestion that we will get an answer very soon.

What are your thoughts on the closure of Yahoo Maps? Are you sorry to see it go? or like many SEOs do you see it as a ‘non-event’?