Not sure if you’ve been tipped off yet @rustybrick but big changes recently to featured snippets. If you own the featured snippet, you only get that one listing and your ‘normal organic’ ranking is pushed to be the number one result on page 2. So instead of 2 listings, just one.

Originally spotted by Mark Barrera, who shared his findings on Twitter, the news broke that sites ranking for featured snippets will no longer appear in the first page of organic SERPs.

He also confirmed that the update rolled out 100% globally on January 22nd.

What is a featured snippet? 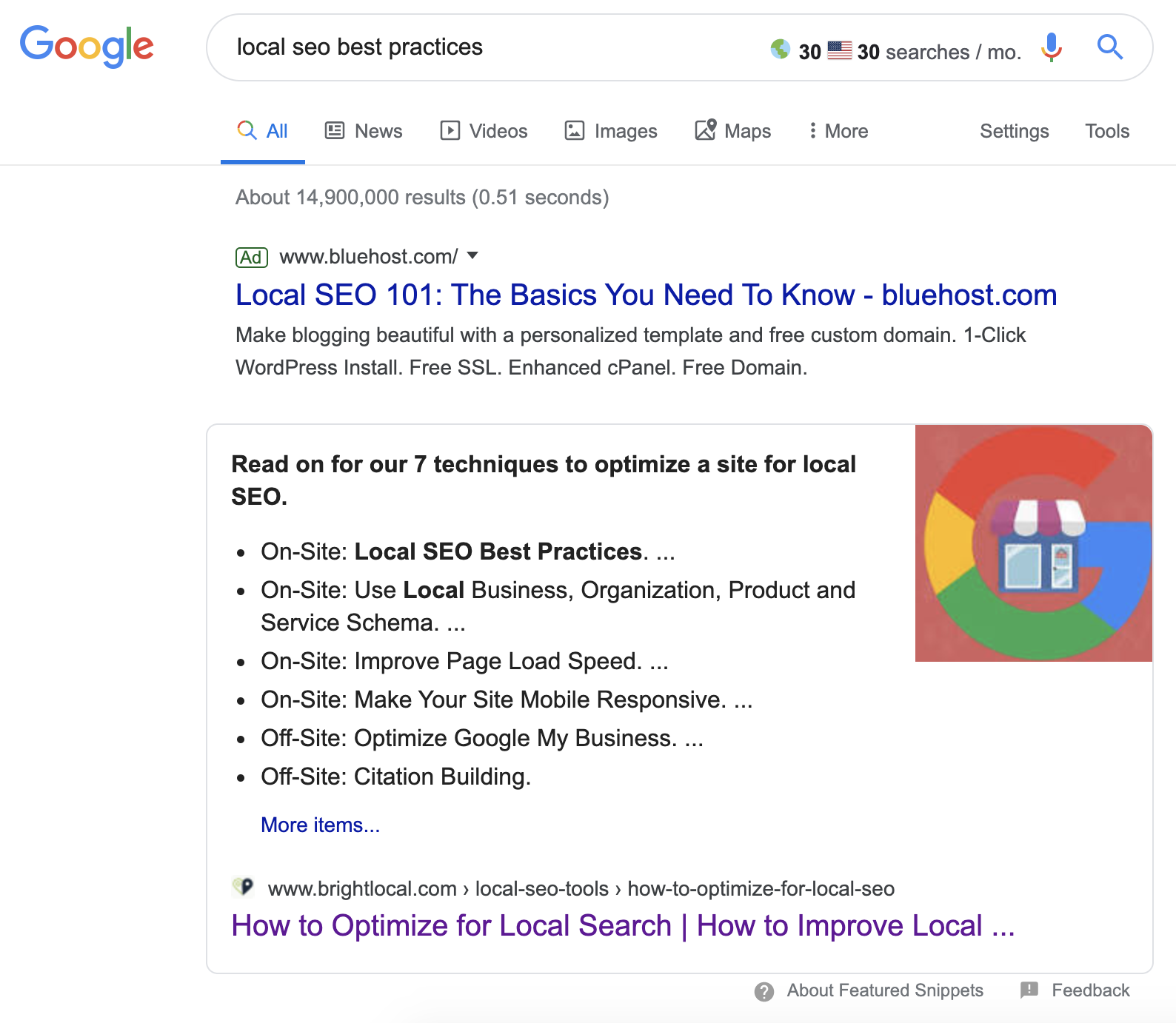 Sometimes referred to as an answer box, a featured snippet is a rich result generated by Google designed to answer the user’s query in a concise manner.

Featured snippets can come in a variety of different formats, including paragraphs, lists (like the above), images, and more.

It might help to know that Google itself describes featured snippets as “special boxes where the format of regular listings is reversed, showing the descriptive snippet first.”

Featured snippets are often referred to as position zero, given that they appear at the top of Google’s search results above organic listings.

That being said, as one Twitter user pointed out, we should probably stop referring to them as that post-update…

So I guess we need to stop referring to a Featured Snippet as Position Zero now huh. #seo #featuredsnippets #googleupdate

What does the update mean?

Put simply, this update to SERPs means that if your site’s page is currently occupying a featured snippet, that same page will no longer be listed in the main body of Google’s search results.

Prior to this update, it was possible to rank both #1 organically and in a featured snippet, too.

What does this update not mean?

FYI, this update does not mean that ranking for a featured snippet completely eradicates your chances of also ranking on page one of SERPs.

No it doesn’t mean that. It just means if the exact URL of the featured snippet will no longer repeat in the web results on the first page.

In instances where a featured snippet is generated with an image from a different site, the URL where the image was sourced will not be affected.

1) Image didn’t have a web search listing, so there’s nothing to deduplicate.
2) No.

How does the update affect SEOs?

So you were optimising your content to get more of those “sweet” Featured Snippets?

Well.. I guess say “bye-bye” to you search traffic now.

For SEOs, this update to Google SERPs means that trying to rank for search queries that generate featured snippets may no longer be desirable.

Interestingly, in results where no featured snippet was present, the first organic result received 26% of all clicks.

The same study also showed that featured snippets reduce the overall number of clicks in SERPs. As Ahrefs points out, this shouldn’t come as a surprise given that the purpose of featured snippets is to answer a user’s query as succinctly as possible.

What those statistics show, is that having a featured snippet is less beneficial to CTR than ranking in position one organically.

What does the update mean for local search? 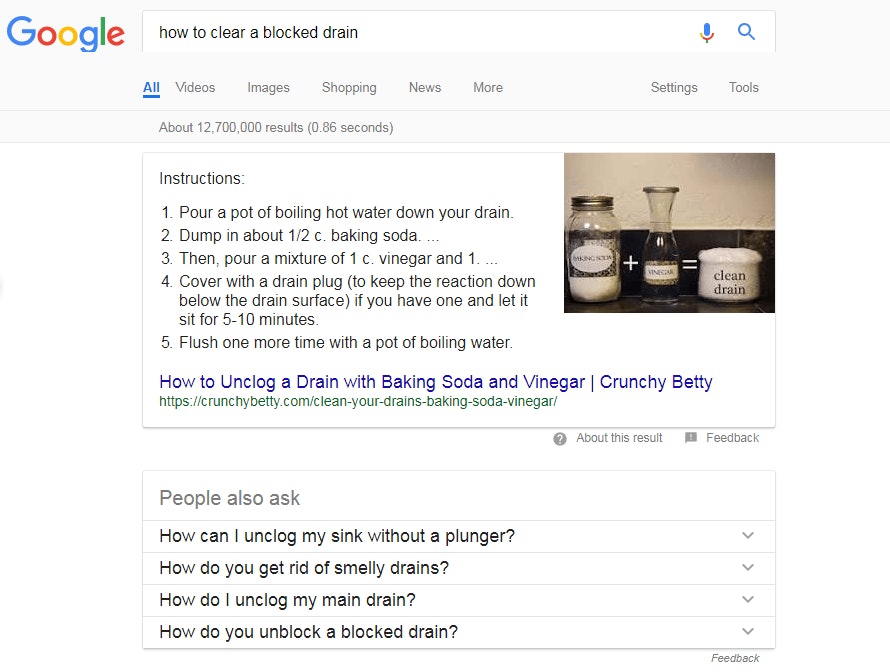 While local businesses certainly can compete for featured snippets (see the example from beauty store Crunchy Betty above), they’re generally less likely to rank for them.

If you’re a pest control company, for example, you may have a blog on “how to check your house for signs of mice” or something similar. If this was written in a list format and optimized correctly, it’s entirely possible it would rank for a featured snippet.

But it’s not so likely you’ll gain clicks or business through this method, given that the searcher could be sourcing this information from a location hundreds of miles from where your store is.

So, in short, this update to SERPs will likely have little effect for local businesses. It may just mean, if you’re an agency, you’re less likely to emphasize the importance of featured snippets.

Oh and, in case you were wondering, this update has no effect on local pack rankings.

What are SEOs saying?

So far, the reception to the change has been far from positive — some users are even asking if they can opt out of being considered for featured snippets (spoiler alert, you can).

What if the listing is not “elevated” but moved to the right? It’s losing all of its organic visibility without the organic position… Will there be a way to opt out off appearing in the featured snippets then? pic.twitter.com/VQt4hb4QT2

For those sharing their concerns, Google’s Danny Sullivan has emphasized how advantageous occupying a featured snippet can be:

Featured snippets drive a lot of traffic. That’s why people often optimize for them. They also often tend to elevate pages that were further down the page to top position. But bottom line, there are options to not be featured, if people don’t want: https://t.co/KpQdHGOKK2

And to be fair, Danny is entirely right in terms of the idea that featured snippets can elevate low-ranking pages.

If you were appearing at the bottom of page one SERPs, having a featured snippet is probably still desirable. But for those ranking in the top three, it may be the case you want to steer clear of featured snippets for now at least.

Meanwhile, Tim Soulo — CMO and Product Adviser at Ahrefs — took to Twitter to share his advice on the matter:

I guess from now on the SEO best practice would be to NOT rank in the Featured Snippet so that to retain your regular listing on the front page of SERP instead.

If you’re wondering whether it’s worth opting out of featured snippets all together, one Twitter user shared this handy tip for checking your “real” ranking (i.e. where you would rank organically if you didn’t qualify for a featured snippet).

We know featured snippets are not always the most traffic-bringing spot. If I de-optimize I might go in #1 (organic), #2 but to a way lower rank (#6, #7). So how to know my “real rank”?
Use this hack: add &num=9 in your SERP url, you’ll see your real rank. pic.twitter.com/cjZ0AeybPL

The conversation among SEOs has naturally turned to questioning, “what next?” If this update is rolled out for featured snippets, could we see this happening for other forms of rich results?

@dannysullivan does this only apply to Featured Snippets or will this eventually roll out to other SERP features like Carousels too? Still seeing double lists on those queries.

As Danny Sullivan mentioned, there are no plans for this functionality to roll out elsewhere just yet, but we’ll certainly be keeping a keen eye on any changes to rich results.

We’ll be keeping this blog updated with any new information that may emerge, but in the meantime, why not share your thoughts with us in the comments below?

In the ever-changing world of SERPs, it’s important for local businesses to be aware of what features they can make use of. Digital Content Editor at Pi Datametrics Emily Hogarth ...

Getting into Google’s Answer Boxes is no mean feat for smaller or local businesses, but it can be achieved with a lot of research and just the right content! Here, ...