How many SEOs have an ambition to start their own agency?

As a local SEO tools provider, most of our customers are SEO agencies, consultants, or web designers. As part of our ‘weekly poll’ series to uncover more truths about the attitudes, practices & goings-on in our industry we put this simple question to our customers last week:

As an SEO, do you have an ambition to start your own agency one day?

We received 315 responses, with 78% from North America & 13% from the UK. See full poll location information. 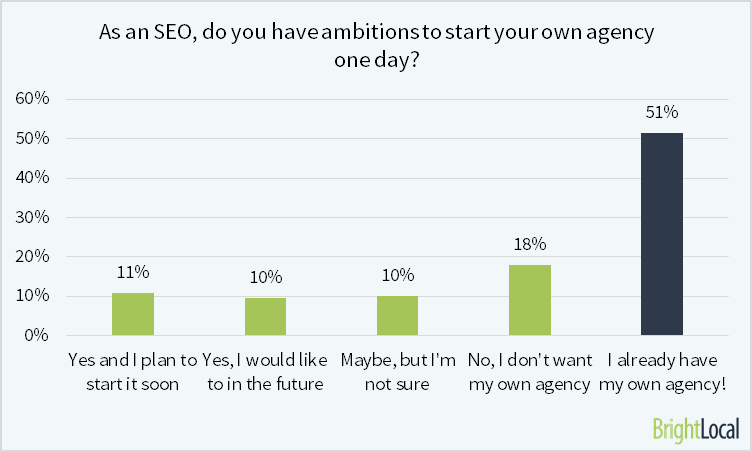 As you can see above, the poll initially revealed that 51% of participants already own their own agency. Clearly, BrightLocal customers really are a go-getting bunch!

However, in order to look closely at the responses from SEOs who haven’t yet got to this stage – we’ve removed existing agency bosses from the data set. 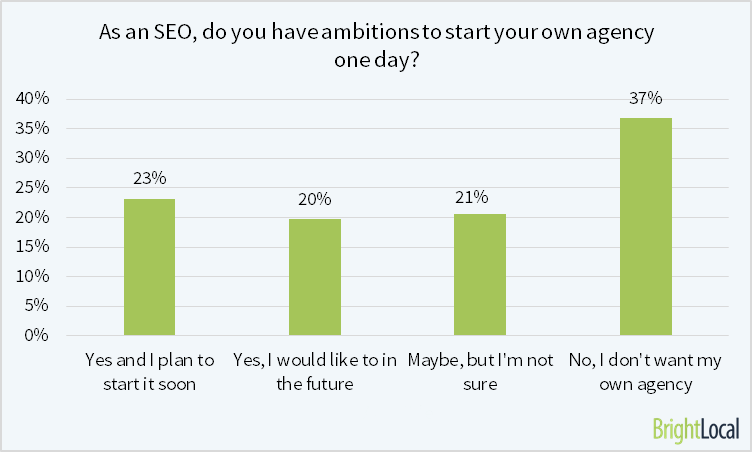 *NB. Above chart excludes SEOs who already own their own agency.

Looking at those respondents who don’t already own their own agency, we can see that the majority answer was for those who have no plans to go it alone (37%).

However, 43% of respondents have other ideas; 23% do plan to start their own agency soon, whilst another 20% would like to do so at some point in the future.

23% of SEOs have plans to start their own agencies soon

It’s a fairly mixed bag of results as you would expect, with a further 21% who are simply not sure if they want to start their own agency or not.

Of course, starting an SEO agency isn’t for everyone – and nor does it show a lack of ambition from those SEOs who don’t want to. Far from it; many SEOs will have plans to climb the ladder in existing, flourishing agencies, whilst many others may have exciting career goals planned in other industries.

What’s preventing you from starting your own agency?

So what are some of the obstacles that would deter an SEO from taking the big step?

Are SEOs put off from starting a business in an industry which has frequent and often radical changes? Algorithm updates like Google Pigeon can be a headache for any SEO, not least an agency owner.

Financial restraints too, cannot be ignored. The Washington Post reported that in the US, the rate of new business creation, which peaked about a decade ago, plunged more than 30% during the economic collapse & has been slow to bounce back following the recession. The risks of being a small business owner extend well beyond concerns about Penguins, Pigeons & Pandas.

Additionally, some SEOs may be hoping to progress their careers within an existing agency – which would certainly provide the security & guaranteed monthly income that can often deter would-be entrepreneurs.

In the 2014 Local SEO Industry Survey, we surveyed 1,759 SEOs on the state of the industry and found some relevant findings –

The average income per client for an SEO agency varies quite a lot, and there there were more clients paying less than $100 per month than there were paying more than $5,000 per month. In addition to this, 68% of SEOs said they charged clients under $1,000/month.

So even if you make that big step, it’s certainly no guarantee of riches.

What’s good about starting your own agency?

The benefits of business ownership are less complicated to explain. Flexibility, freedom & the power to dictate your own direction are obvious pluses for budding entrepreneurs.

In 2014, Julien Brandt, Founder & CEO of Organik SEO, a successful, growing search agency based in San Diego, told us how to grow from a 1 man consultancy into a successful SEO agency.

Julien shared the following with us –

“When I started Organik SEO four years ago my “Why” was simple. I wanted to provide transparent, honest, SEO to small service-based businesses and change the perception of a notoriously spammy industry. I had a deep desire to build a business I could be proud of, and I felt a need to create something that was bigger than myself.”

So can we offer any advice to the 23% of SEOs that plan to start their own agencies soon?

As Julien told us; “for anyone seriously considering making the transition from consultant to a full-fledged agency, persistence is the one thing you cannot do without”.

Do you plan to start your own agency soon? or are you very much against it??

Whatever your stance, we’d love to hear your thoughts, ambitions & goals in the comments below!

Who took part in the poll?