On February 24-25, our local algorithm monitoring tool, Local RankFlux, showed some turbulence – suggesting that there may be changes being made to the local algorithm.

For those of you not so familiar with Local RankFlux, every day, we track around 14,000 keywords from a set of locations in the US, and compare these to the previous day to provide a daily score showing how much has changed in local rankings.

Different ranking positions carry different weights – with movement in the top-ranking positions counting more towards the overall score than those ranking at the bottom of the top 20. You can learn more about how Local RankFlux works here, or sign up for regular emails to be alerted of possible local algorithm updates.

On a ‘normal’ day, we tend to see the overall score ranging from 2.0-2.8. In fact, since some above-average flux in November, daily scores have been closer to 2.0, which makes any unusual change even more noticeable.

The average daily Local RankFlux score for the month January 24 – February 23rd was 2.14. Last week, scores jumped to 3.44 on Wednesday, and 3.79 on Thursday – a 61% increase in daily flux for the Wednesday compared to the monthly average, and 77% up for the Thursday. 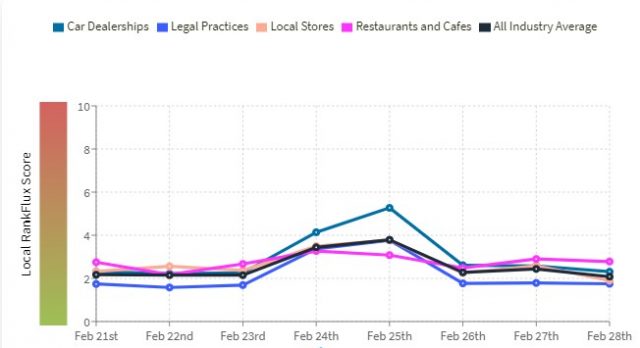 And when you drill down into the individual scores per industry, some niches saw even more change than usual – with car dealerships being particularly notable, climbing from a norm of 2.2-2.6 in the previous month to 5.27 on the 25th – around double the rate of normal daily change.

But, does this mean there was a local algorithm update?

No, it doesn’t. As of yet, there has been no confirmation from Google that there was a local algorithm update, and discussion around ranking changes hasn’t been as widespread as in some previous official algorithm updates (see November 2019’s Bedlam update).

Google has upped its communication game over the last few years, and tends to warn of Core Updates affecting the search algorithm – though we’re still yet to receive warning before a local update occurs. We’ll be sure to update this post if/when we have more information.

Of course, while Google updates its algorithm hundreds of times a year, change in local rankings tends to be seen less frequently. Last May, above-average flux turned out to be a bug, and other instances of change often seem to resolve themselves after a few days.

Sometimes, Local RankFlux reports a couple of days of flux, but little change is noticed in the real world as movements are only short-term. This was not the case this time, with Joy Hawkins reporting examples of shifts for some clients over on Local Search Forum.

Seeing some pretty large shifts in local rankings in the last 48 hours. Add to the discussion here: https://t.co/zzLzkiTZzI pic.twitter.com/RsGb50zpaQ

In Barry Schwartz’s writeup of the potential update, many commenters also shared their own examples of rankings changing. If you’ve seen changes to your business’s or clients’ local rankings, let us know in the comments.

To try and see how rankings changed last week, I looked at a small subset of the data to compare daily changes compared to ‘normal’. To do this, I looked at two industries – car dealerships and legal practices across three different cities in the US (Atlanta GA, Austin TX, and Milwaukee WI.)

Local RankFlux compares to the previous day, so a one-day blip can stretch to two days of flux – for example, if a business ranks in position #1 on Day One, drops to position #10 on Day Two, then returns to #1 on Day Three, this will show as two days of higher fluctuation.

I’ve compared each day to a fixed day (21st February), and also compared some key dates to see how rankings changed between these days.

Between the two days of higher flux, 32% saw no change – a similar rate to the day before. When you compare the rankings on the 25th and 26th, 57% saw no change. This suggests that the changes that were made during the fluctuation may have stuck around, rather than just reverting right back to the rankings seen prior to the 24th.

In fact, if you compare rankings between the 21st and the 28th, only 26% saw no change – which could indicate that rankings have seen a longer-lasting change, rather than a one-day blip. However, please note that I’m looking at this data in a vacuum – I do not have a ‘normal’ proportion of rankings that would see changes over the course of a week to compare if this is any different than a normal week (but I’ll look into it!)

The majority of changes seem to be small, with businesses most likely to see changes between 1 and 3 places – 20% saw a change of more than 4 places over the course of the full week. However, we all know that even small changes to a business’s ranking can have a big impact on both traffic and leads.

What To Do Now

If your business has seen drops over the last week, pay close attention to your rankings over the next few weeks. Ranking changes are often temporary and can bounce back to normal – especially if this turns out to be a bug or short-term test. You may want to consider checking your rankings across a wider local area to see how you’re ranking further afield.

When it comes to changes, Mike Blumenthal’s advice tends to be the best option to follow:

Best thing is take two beers and come back Monday

Don’t make any rash decisions – and remember that some changes to your Google My Business listing are known to cause suspensions. SEO should always be a proactive, rather than reactive strategy, so continuing to focus on the key local SEO ranking factors is the best possible way to improve your rankings in the long-run.

For further advice on improving your local rankings, check out the following resources from some of my excellent colleagues and our wonderful contributors:

Have you seen changes to your local rankings? Let us know what you’ve spotted in the comments below!

Rosie Murphy
Rosie managed BrightLocal's delivery of research and survey pieces. She headed up data-driven content such as regular polls, webinars and whitepapers, including the Local Consumer Review Survey.
See all of Rosie's articles (67) Follow Rosie on Twitter

We’ve been working hard behind the scenes and are thrilled to announce the arrival of BrightLocal Academy: a free online school dedicated to teaching you all about local SEO. Built ...

We’re incredibly excited to announce the launch of Local Search Grid, a brand-new local map ranking tool from BrightLocal that allows you to see the bigger picture of search. Without ...

Update: In December 2021, Google updated the local search algorithm to place more prominence than ever before on proximity as a ranking factor. Aptly nicknamed the Vicinity Update, this algorithm ...