Google is always hitting the headlines with some sort of innovation, adaption, algorithm change or acquisition that has a rolling effect on the rest of the digital marketing and SEO industry. Their own mobile operating system, Android, is consistently getting stronger, and it’s even begun clawing away at Apple’s iOS market share. The search engine’s video platform, YouTube, is not only the biggest global provider of streaming video content but it is also effectively the second most used search engine on earth — second to Google itself.

In the wake of all of Google’s achievements and dominance in the market, it’s easy to forget those search engines that seem to have been left behind. You do remember Yahoo!, don’t you? Yahoo! was once a business that was considered a world-changing enterprise. But it has been on a gradual downhill slide for more than a decade now.

In a recent survey, we asked our audience to tell us how important ranking on Yahoo! was to their clients and customers. 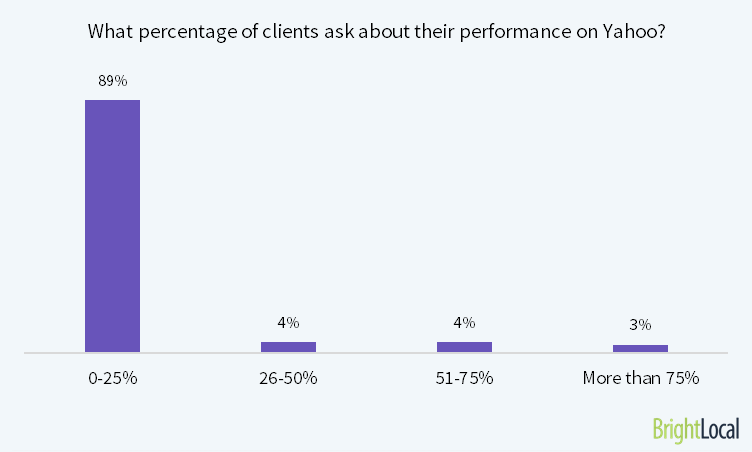 As the results show, a client’s concern about how they’re ranking on Yahoo! is very low – with nearly 90% of all those surveyed saying their clients simply didn’t care or don’t even ask about performance on this search engine.

Should you care about Yahoo?

It’s hard to argue with the basic rationale that Yahoo! simply doesn’t have the scale that Google does and certainly doesn’t have enough of a market share to warrant the time and effort to actively market and try to rank on Yahoo!

That said, it is arguable that that view could also be considered a little short sighted. After all, 5% market share of a monumental sized industry isn’t half bad. Globally there are six billion, five hundred eighty-six million, thirteen thousand, five hundred and seventy-four searches made each day. (On a calculator that looks like this 6,586,013,574.) It’s quite a mouthful.

Due to the awe-inspiring scale of Google search, it’s a common viewpoint that Google is enough and there is no need for brands and marketers to put any emphasis on directly aiming for significant search results and rankings on Yahoo! Many will take the approach that it’s an SEO side bonus if high rankings on Yahoo! are generated by means of your other SEO efforts. Though the reality is that there is still traffic to be earned on Yahoo! While it’s less than the industry standard set by Google, search volume through Yahoo! can make a difference.

Due to the common perception that it isn’t worth the extra attention, it’s widely considered that the competition levels on Yahoo! search are far less than on Google and other engines. This means that there is potential for those not quite hitting the mark on the earth’s most popular search engine to make a greater impact via Yahoo!. Be a bigger fish in a smaller pond.

So as a search engine, should you care about Yahoo!? Arguably yes you should still care and if we’re all honest with each other, we wouldn’t say no to a potential 5% increase in search generated traffic for the sake of a little extra effort or equivalent media spend, would we?

The significance of Yahoo!

Perhaps a greater reason to care about Yahoo! is its significance as a business and the power it still holds as a digital industry influencer.

At its height in 2000 during the dot com boom, Yahoo! reached its highest valuation point at $125 billion. Yahoo! was pegged as a global digital and technology leader at the time and it looked like nothing could get in its way.

Looking at more current financial indicators, Yahoo! Search revenue in 2015 was worth less than $2 billion annually. Now this is nothing to be sniffed at and in general terms — it’s absolutely massive. Unfortunately, this figure is utterly dwarfed by Google’s revenue which from its YouTube brand alone was more than $6 billion.

In 2012 Yahoo! poached Google’s then exec, Marisa Mayer, and appointed her as CEO to help save what was essentially a slowly sinking ship. Despite acquisitions which include blogging social media platform Tumblr and the launch of new digital content magazines (many of which have already been discontinued) Yahoo! has not seen the epic turnaround it set out to achieve.

With all the above considered, almost a year ago in July 2016 Yahoo! was bought by communications giant Verizon for $4.8 billion. Given Verizon’s current standing in tech, communications and mobile, can the mega brand breathe new life and innovation into Yahoo! and generate a genuine competitor to the likes of modern day leaders such as Google and Facebook? Only time will tell but it may be a little foolish to draw a line under any conclusions just yet.

We’d love to hear your thoughts

Are you in the majority that see Yahoo! as a waste of time and effort or do you think it’s search volumes do hold a treasure trove of potential for those priced out and sized out of Google? Let us know your thoughts in the comments below.