Today is the day that Google unleashes its Mobile-friendly search algorithm. From today, mobile results will begin to exclusively display search results that include sites which are classified as ‘Mobile friendly’ – however a full rollout which could take a number of weeks, means that we may not see the full impact just yet.

Mobilegeddon is upon us

First announced in February, Google has said that this algorithm change will affect mobile searches worldwide, and in all languages, having a significant impact on its search results.

We polled BrightLocal users about the Google algorithm update 2 weeks ago & found out that 60% of respondents were extremely focused on getting their client’s sites to be mobile friendly. It was either their number 1 priority or they were focusing a lot on it. 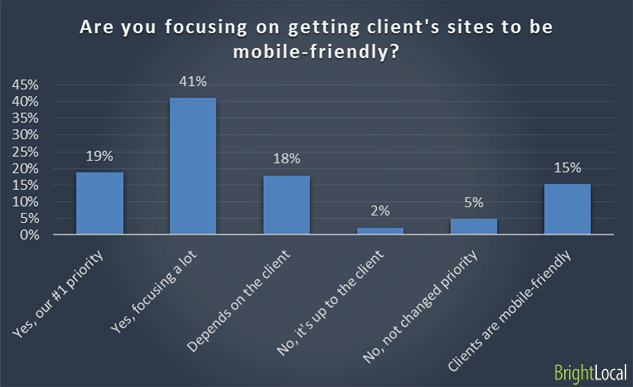 Mobile friendly SERPS for everyone

This algorithm change is expected to have a bigger impact than both Panda and Penguin, which affected 12% and over 3% of search results respectively.

Although the algorithm change is officially implemented worldwide today, Google has said that it will take a few weeks for it to be fully rolled out, meaning that we may not see the full impact of Mobilegeddon until May / June 2015.

We have already seen reports of large sites that are expected to be affected by the algorithm change, but the fact that it may have a longer roll-out period may give them a little longer to prepare. At BrightLocal, we ourselves do not yet pass the mobile-friendly test but we are midway through a fuller site redesign project & are scheduled to our fully responsive & newly designed site in Mid-May, 2015.

Mobilegeddon – What you need to know:

Google has also created a how-to-guide to becoming mobile friendly, for anyone using third-party software such as WordPress or Joomla.

Does your site meet the mobile-friendly test?