When it comes to enabling businesses to set themselves as ‘opening soon’, Google Maps and Google My Business differ in one very important way. Here, Eduard de Boer shares his experiences working with the ‘Opening Soon’ feature for his clients.

In September of 2018, Search Engine Land reported that Google was experimenting with an option which would allow business owners to enter future opening dates on their Google My Business Listings. Google moved fast: the option made its official debut on November 5th.

Timing is everything for businesses who want to take advantage of this capability, as you can only enter an opening date which falls 90 days or less into the future. But for many businesses, this is a welcome improvement to the GMB platform.

Urban Air Parks is one of the larger trampoline park franchises in the US. I’ve had the privilege of working with them for about four years now. They’ve grown and expanded to the point where they now open a handful of trampoline parks around the country every month.

In the past, I would have to scramble to set up the corresponding GMB listing within a few days prior to the opening of any new location. Creating the listing too early meant finding the listing disabled by Google, or even watching my client get bad reviews from angry people who were disappointed to find the location still under construction after viewing a listing indicating the location was open and fully functional.

Until recently, it was impossible to use GMB posts to create any momentum.

Now? I get 90 days of lead time, and I can specify a grand opening date. The opening date gets displayed directly under the business name, so the listing clearly communicates the viewer is looking at a future opening date (See Fig. 1 in the screenshot below). 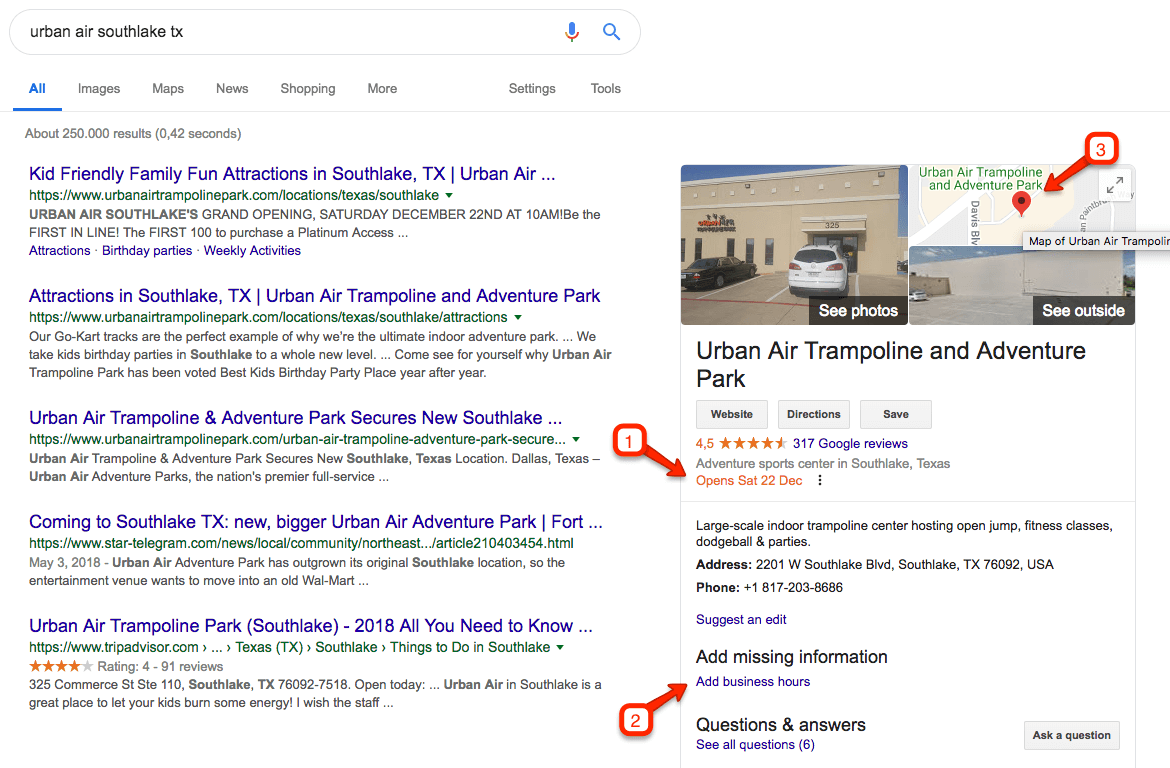 To further avoid confusion, GMB also avoids displaying the business hours until the location opens, even if you go ahead and get them set up (See Fig. 2 in the screenshot above).

You can do a lot with GMB prior to your opening date, including:

However, not everything is running smoothly with the ‘Opening Soon’ functionality…

I stumbled on to an issue while using this feature on behalf of my clients. While the listings existed, suppliers attempting to deliver equipment to locations under construction couldn’t find them in Google Maps. This resulted in delays due to missed deliveries.

There was a workaround, but I had to find it.

Until the business opens, you can’t look up these locations directly in Google Maps. You have to look up the location in GMB, then click through to Google Maps using the smaller map located in the Knowledge Panel (See Fig. 3 in the screenshot above). This will display the location perfectly. Not exactly intuitive.

From a UX experience, this makes sense. Maps doesn’t want to show a business that isn’t open yet. Since the future opening date can’t be displayed in Google Maps directly, Google would risk guiding clients to a location that’s under construction.

Fortunately, Google Maps does work if you enter the exact address directly into Google Maps. All you have to do is make sure suppliers know the address and use it.

What happened on the opening day of the three new Urban Air locations?

I didn’t want to experiment with the opening date setting prior to opening because any tinkering could have had a negative impact. I was especially worried about doing something by accident which might have prevented the listing from showing up on GMB on grand opening day.

For the days leading up to the Opening Day (22nd December), I held my breath and kept my fingers crossed.

I happen to live in the Netherlands, 7 hours ahead of the Central Standard time zone Urban Air’s Southlake location sits in. This led to me setting my alarm to 6:00 AM so I could see what happened as the clock clicked over to midnight in Texas.

If the setup failed, I was hoping I could do something to handle the problem long before customers were awake and looking for a place to play with friends and relatives prior to Christmas Day.

The alarm never had to sound. I was too anxious. By 5:00 AM my time I was up and checking the listings in all three locations!

All three listings were now live on Google Maps (what a relief)!

I did observe that there was no “Opened Recently” ribbon anywhere on the GMB listing, a feature I’d expected to see thanks to the Search Engine Land coverage. The listings were just there, like any normal listing. Good enough for me!

I hope sharing my experience with the ‘Opening Soon’ feature encourages you to use it as standard, while allowing you to overcome some of the hurdles I faced.

Eduard de Boer
Eduard de Boer started with hand-coding websites in 1993 and became immersed in SEO, reputation management and content marketing in the years thereafter. After almost two decades Eduard is still following his passion: consulting and helping companies around the world to profile themselves better. Eduard is also a Google Trusted Verifier and an internationally acknowledged Google Street View Trusted Photographer.
See all of Eduard's articles (1)

Our recently-released Google My Business Insights Study took 45,000 GMB profiles across 36 industries and analyzed their Insights to see which industries were outperforming others. Following on from our deep ...

In a move that will excite service-level businesses wanting more traction from their Google My Business efforts, Google is rolling out frankly massive ‘Get a Quote’ buttons for relevant businesses ...