Nice one for Local SEOs to be aware of. Now seeing standard Posts appears from months back by default. Would show for 7 days previously, then “expire” and become hidden behind the ‘view all’ button. Glad to see more visibility given to Posts – this change makes sense IMO. pic.twitter.com/H3pQTDG5qH

As Brodie mentions, Posts created within Google My Business are now showcased on the business profile, even if they’re months old.

In local SEO, we’re used to seeing lots of tests, changes, and updates to Google My Business and its features, but this is arguably the biggest bit of GMB news so far this year.

What are Google Posts?

First things first, let’s remind you just what Google Posts are (if you’re familiar with them already, skip ahead to the news!)

Introduced to local businesses in 2017, Google Posts are a Google My Business feature that allows merchants to communicate offers, events, and news through their business listings.

Before this latest change, Google Posts would be visible in the business’s Knowledge Panel for seven days after its creation.

There are also a handful of other guidelines that Google Posts need to follow, but they’re not dissimilar to any type of social media update (think Facebook posts but directly in SERP!)

Here’s what you need to know about Google Posts:

– Each Post has a limit of 300 words
– Only the first 100 characters (or fewer) of the Post will appear in the business’s Knowledge Panel.
– You can include an image, a CTA, and a URLhttps://t.co/59udFTKEs7

It’s worth noting that Google Posts aren’t thought to be a ranking factor or influence rankings, but Posts can help to convert searchers into customers.

Previously, Google Posts were visible for just seven days, and — while Google Posts were considered a great feature, with many local SEO experts recommending that local businesses take advantage of them — their fleeting nature may have put many users off.

Now, Google Posts from weeks, months, or years ago, will display as default in a business’s Knowledge Panel. If a business has more than two Posts to display, an arrow will display on the right-hand side signalling that the searcher can scroll through them.

Note: this looks to also apply to new imagery uploaded to listings (likely other aspects too). When adding an image it would previously show up like a Post, then expire. Here’s an image showing from 6 months back on a pretty inactive GMB listing. pic.twitter.com/XSBp47txaL

What do we know?

It looks unlikely that this change to Google My Business is just a test, given that local SEOs across the world are seeing the same results in terms of old Google Posts showing up in the Knowledge Panel.

On Twitter, members of the local SEO community have reported seeing Posts with date ranges varying from two weeks ago to 2019!

So far most reports of spotting this we’ve seen have been in the US, but we can confirm that here in Brighton, UK, the change is also present.

See here a local burger restaurant has a Post visible that dates back to August 2020: 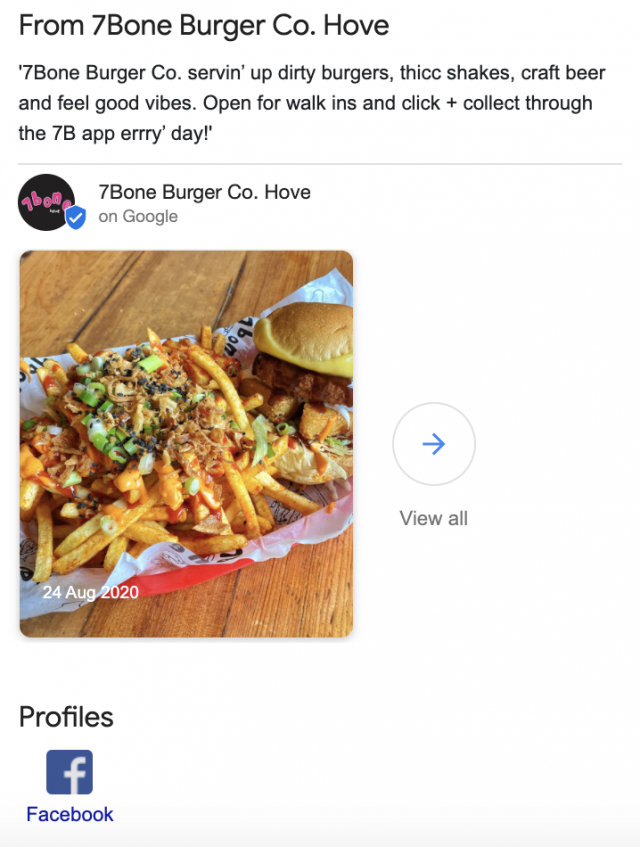 Although this update has clearly rolled out globally, it is worth bearing in mind that Google hasn’t yet made an official statement on this news. It’s not always the case that Google will formally roll out new guidelines when features change, but we’ll be keeping our eyes and ears open in case they do. In the meantime, you can familiarise yourself with the existing Google Posts guidelines.

What do local SEOs think?

So far the response to this Google Posts update has been more than positive.

UK-based local SEO and agency owner, Claire Carlile, has already proclaimed just how important this update could be for local businesses:

This is kind of a big deal! Use Google posts, and make sure the content of those posts is good! ? https://t.co/Y6pOfsyZaU

Similarly, other local SEOs seem to think this is a great opportunity, and a wise update from the folks over at Google to give Posts the attention they deserve.

To gauge how our followers felt about the situation, and whether or not the news would make them want to use Posts more, we ran a poll on Twitter:

We want to know, are you more likely to use Google Posts now that the seven-day expiration date is no more? ?

At the time of writing, there was a strong lead in the proportion of local SEOs planning to up their Posts game. So, it looks like, for BrightLocal users at least, this update to Google Posts is only going to increase usage of the feature.

Since the advent of Google Posts, the GMB feature has been lauded by local SEO pros as a way to engage searchers from the get-go. That said, our Local Search Industry Survey showed that only two-thirds of agencies offered Posts as a service, so we could speculate that the feature is being underused.

Now though, with Posts having no expiration date, the feature is surely worth investing in more than ever.

The more relevant, engaging Google Posts your business’s Knowledge Panel showcases, the more signs of life you’ll be showing to potential customers. Think of it as a way to show your personality, communicate updates, and share enticing offers.

Just remember, with old Posts potentially resurfacing, you’ll want to check in on your GMB listing to ensure old, outdated offers aren’t showing, as this could cause confusion to searchers and potential customers.

What do you think of this Google My Business feature update? Let us know in the comments or Tweet us!

Spotted something you think’s new in local SERPs and want us to write about it? Get in touch!

Google’s algorithm to rank local search results relies on a wide variety of different signals, so it can be difficult to know where you should dedicate your efforts. To ensure ...

We Asked the Experts is a series designed to provide you with the most relevant insights from local search experts. Each month we’ll cover a different question and share insights ...