Recent research from BrightLocal has revealed that the average local business ranking 1-3 in Google Local has an average of 85 local SEO citations, and that there is a correlation between higher numbers of citations and higher rankings in Google Local. (These findings are based on 122,125 local businesses found using 18,580 related keywords.)

This supports the results of the Moz’s 2017 Local Search Ranking Factors Survey, which found that citations (consistency, volume) have a 13% impact on local rankings.

Please note: Apple Maps, Google My Business, and Bing were not included in this study as data was unavailable. Take a look at the study’s methodology for more information. 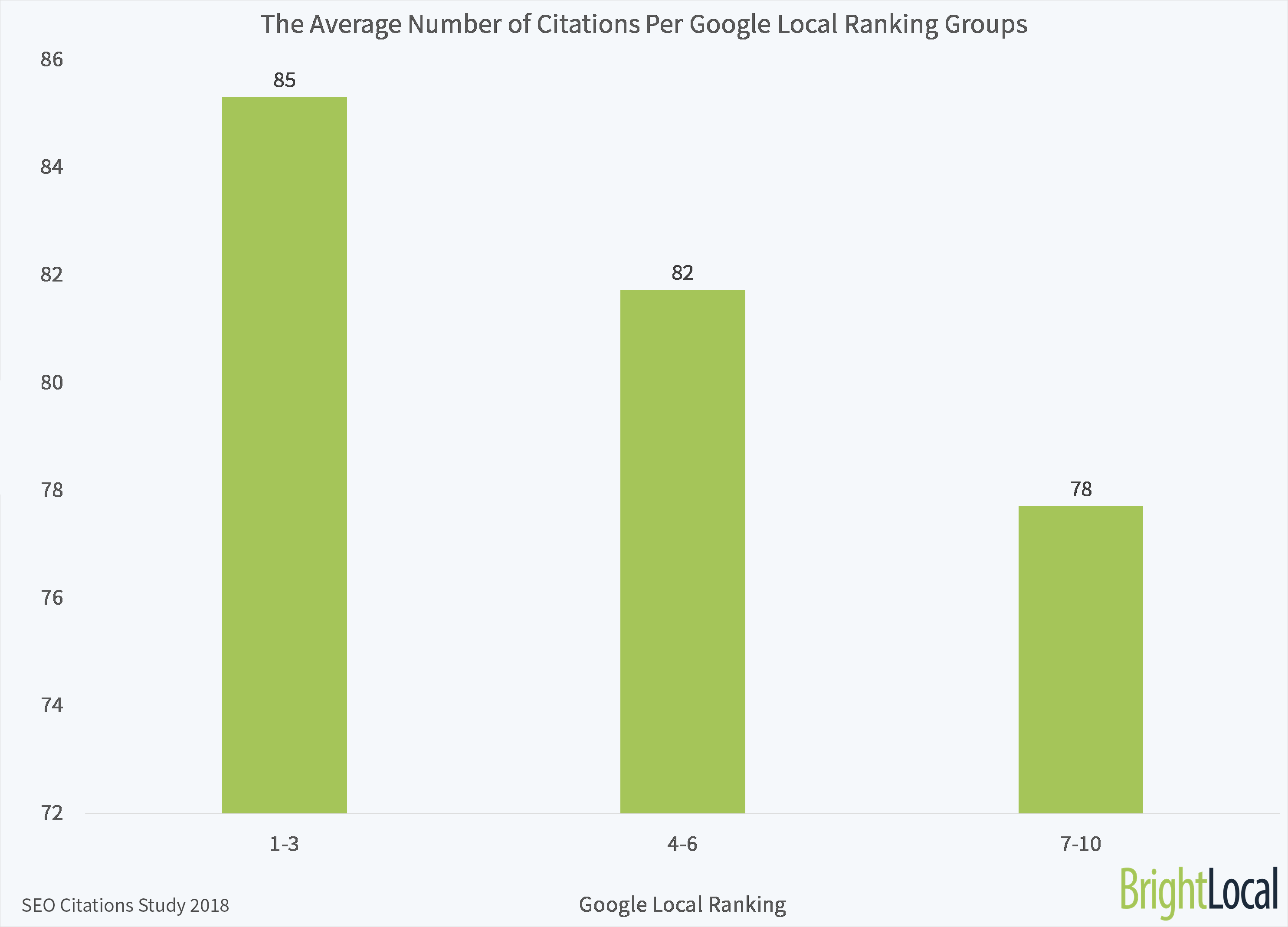 There are a variety of factors that affect local rankings, so we obviously can’t assume absolute causation and suggest that if you get more citations, you get higher rankings, but it can’t be denied that there’s a significant trend here showing that businesses that take citations and local SEO seriously tend to rank well.

What are the most popular citation sites for local businesses?

The SEO Citations Study looked at citations for a variety of industries, and although each vertical has its own key niche citation sites, it found that (apart from Google My Business, Apple Maps, and Bing) Facebook and Yelp were by some distance the clear leaders in popularity across the board. 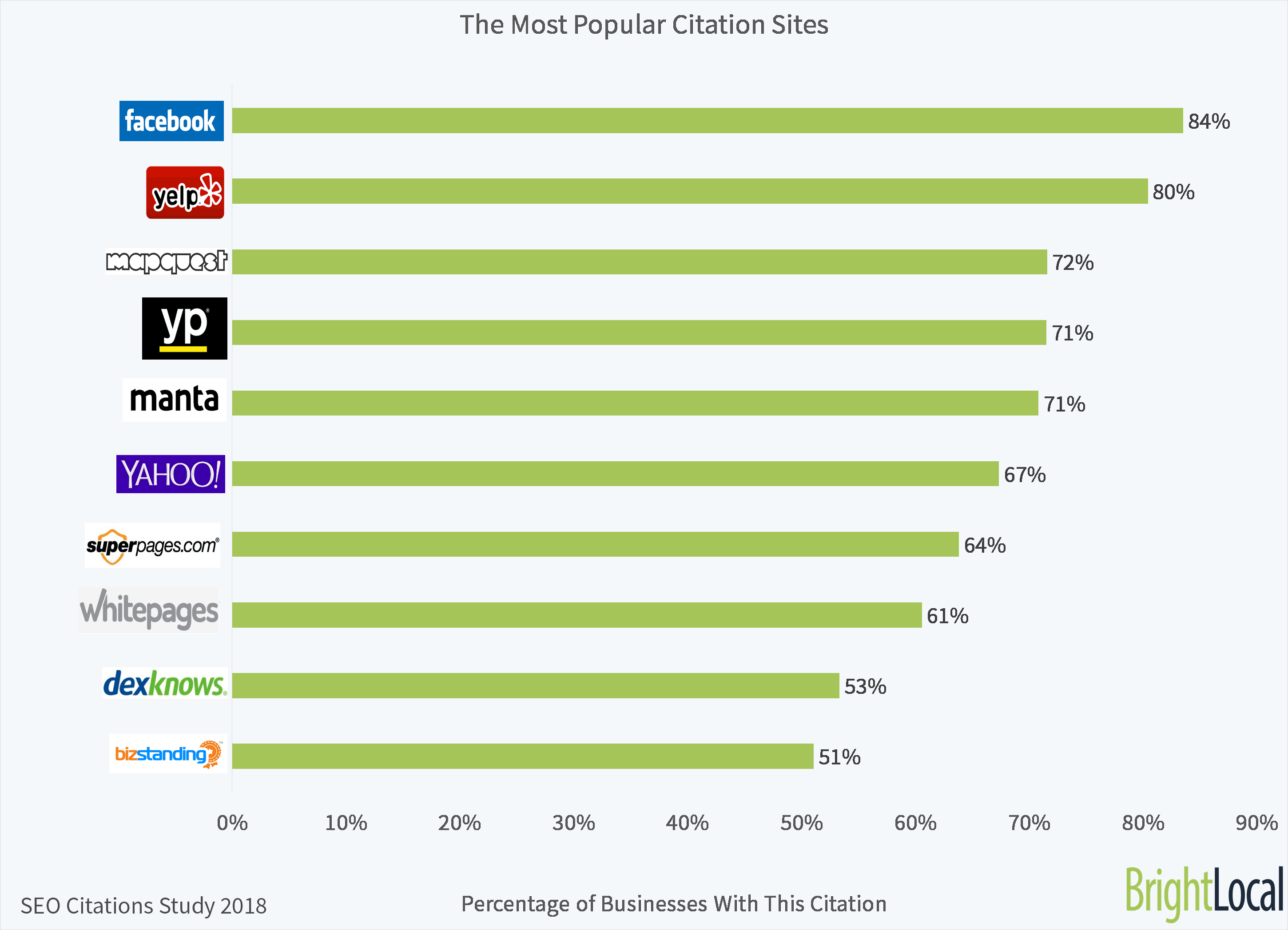 As you can see, Facebook was used by 84% of businesses analyzed and Yelp was used by 80%. There are some other very familiar names here, including YP, Mapquest, Yahoo!, but it’s interesting to see a 33-point difference between the most-used and the tenth most-used citations site. This intense focus on just a handful of citation sites just show how much companies like Facebook, Yelp (and, of course, Google and Apple) have the citations market sewn up.

There’s a 33-point difference between the most-used and the tenth most-used citations site.

For details of the top citation sites for each of the 26 industries we analyzed, be sure to head over to the study page and download the full report PDF for your industry. This data makes it easy to build a case for citation building as it allows you to benchmark your or your client’s business against its competitors.

Which industries are missing out on key citations?

All the citation sites in the chart above are widely used, non-location specific and non-industry specific so it comes as a big shock that 5% of local business analyzed were missing these key citation sites. 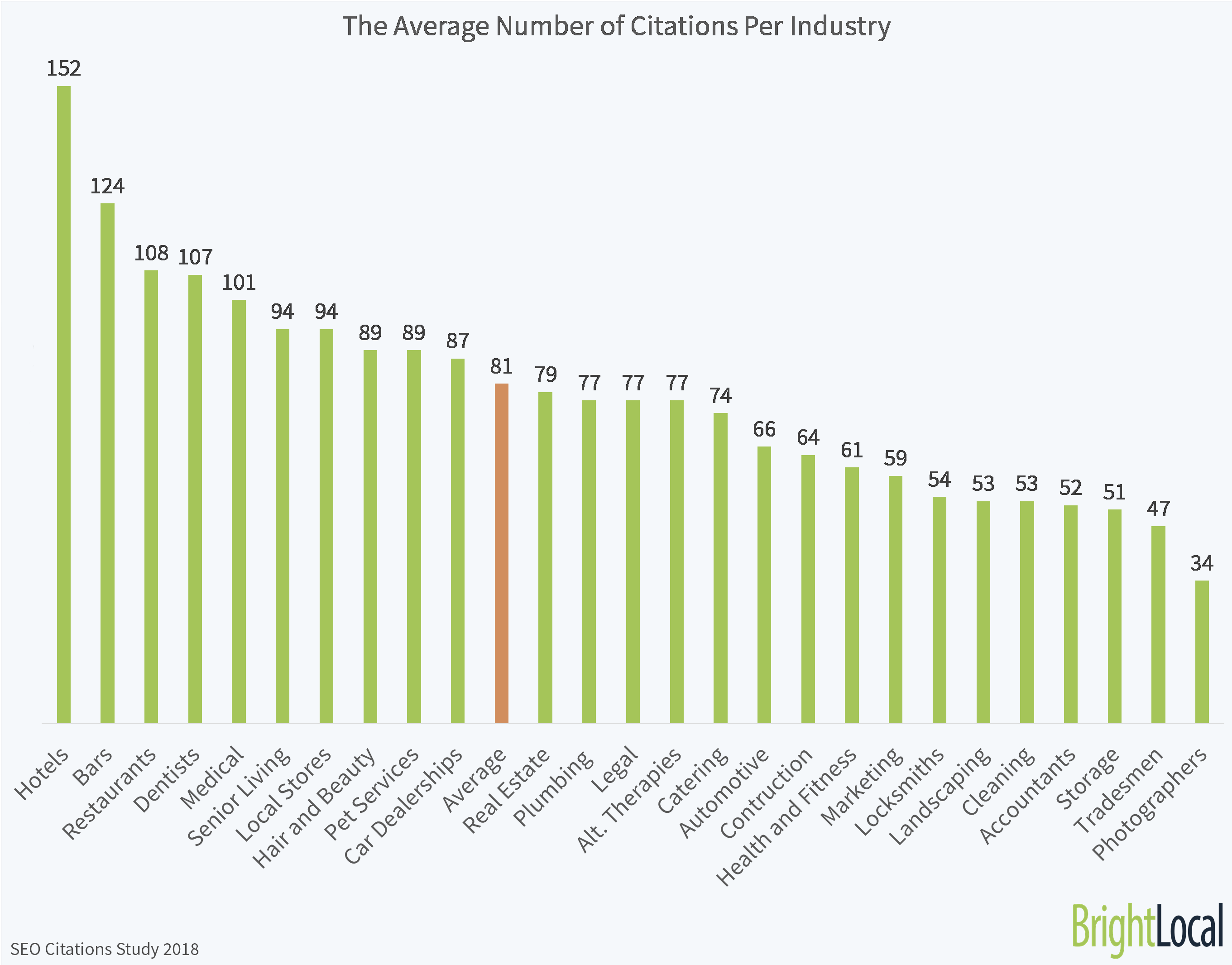 As you can see, this figure is much higher in certain industries, with a huge 18% of Tradesmen missing all of the Top 10 citation sites. This does fit the overall story of Tradesmen not being particularly keen on citation building, as the average business in this industry had the second-lowest number of citations in the study (47 citations per business, ‘beaten’ only by Photographers, with an average of just 34 citations).

These findings, together with the overall story surfaced by the SEO Citations Study, show that there is still a great deal to be done to highlight the importance of citations among certain industries. It’s my hope that, using this data, SEOs and in-house marketers can convince their clients and bosses that they’re missing out on a foundational way to increase local rankings and visibility in the places that matter to their potential customers.

Jamie Pitman
Jamie heads up BrightLocal's content team, ensuring we produce insightful articles, research and resources that enable businesses and SEOs to get even better results in local search.
See all of Jamie's articles (124) Follow Jamie on Twitter

BrightLocal’s Citation Builder tool has been nurtured over the years to provide you with the best, most efficient service. However, while we’d love to achieve world domination, expanding our product ...

Post last updated: March 2021 We see a lot of questions in forums and blog comments asking ‘which citation service is best?’ so we thought we’d provide a useful resource ...