It’s official: review signals are becoming even more important to local SEO rankings. We know Google values trustworthy businesses, and frequent and positive reviews are one way to assess who comes out on top.

And while plenty of other review sites exist, Google reviews’ visibility in search results is helping make Google the fastest-growing reviews platform.

We wanted to find out how local businesses are using Google My Business reviews, and provide you with the statistics to help you benchmark your business against others in your industry.
For this report, we anonymously explored the Google reviews profiles of more than 93,000 local businesses across 26 different industries in order to uncover:

If you’d like to find out more about this report, you can find the methodology here. And, if you had any thoughts or queries, let us know in the comments below.

We collated data across 26 industries to tell the overall story of local businesses’ use of Google business reviews, looking into:

Proportion of Businesses with Google My Business Reviews by Industry 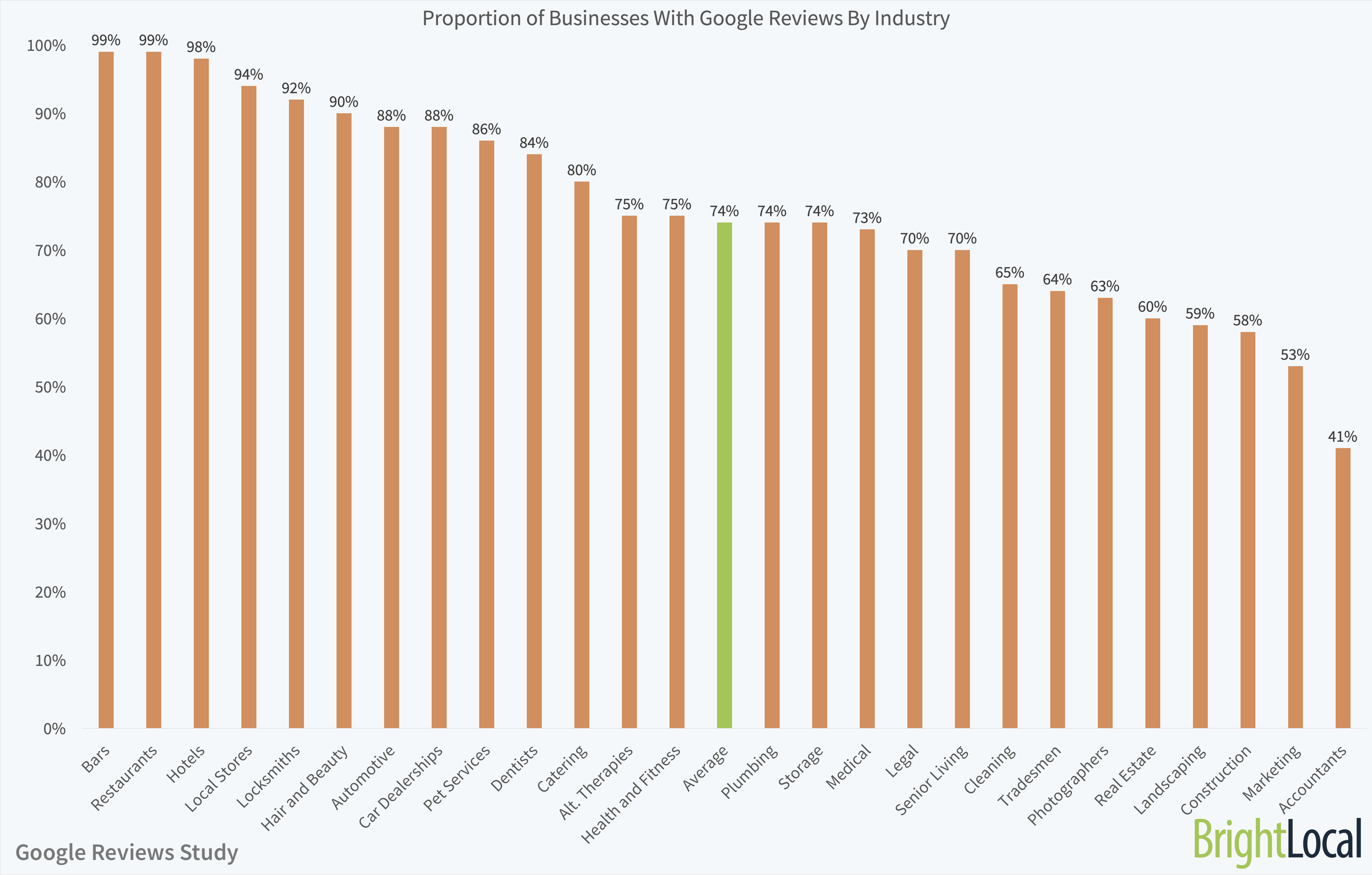 Local stores are also highly likely to have reviews on Google, and with Google beacons becoming more commonplace, stores could see a rising average in the near future.

Perhaps unsurprisingly, some of the less frequented industries are slower to gain Google Reviews. Consumers rarely have the need to use a local finance business compared to how often they’re likely to go to a bar or restaurant, which leaves more scope for online reviews for the latter business types.

The Average Number of Google Reviews by Industry 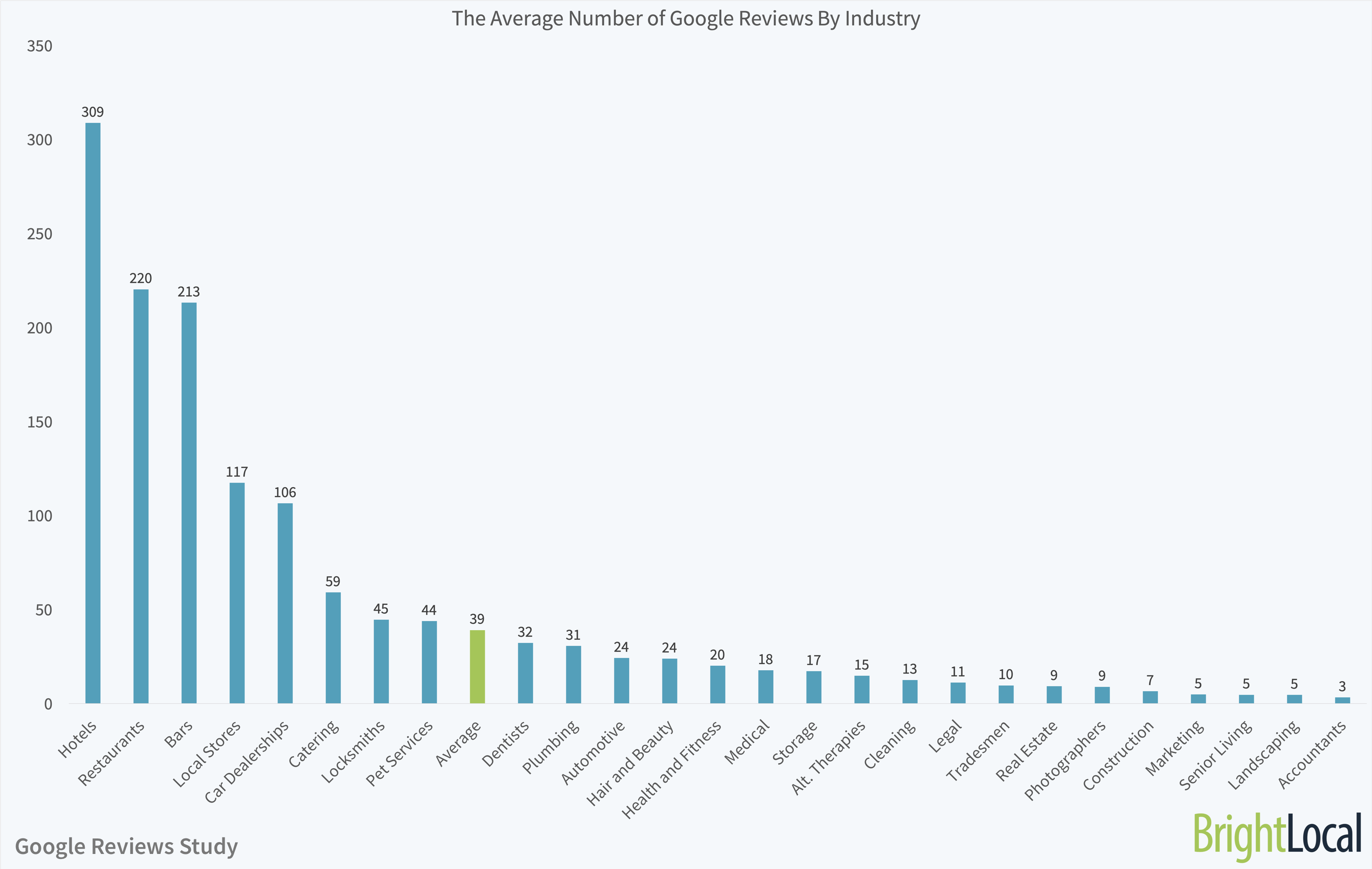 The above chart shows the average number of Google My Business reviews for each industry, including businesses that do not have any reviews.

Local businesses have an average of 39 Google reviews, but, there is a significant disparity between industries.

Our 2018 Local Consumer Review Survey finds that the average consumer expects a business to have 40 reviews before trusting its star rating. Those industries with higher review numbers are likely to be benefiting from their Google reviews prowess—setting expectations for all other industries to match these numbers.

There tend to be more hotels, restaurants, and bars to choose from than some other industries, so perhaps it’s no wonder that these industries have more reviews when appearing in the top 10. But, as you’ll see below, the industries with the most reviews don’t necessarily have the highest overall star ratings.

What is a Google Star Rating?

The Google rating of business pages is ranked between one and five stars. This is determined by the number of positive reviews left by previous customers. A one-star review would indicate poor service, whereas five stars would demonstrate excellence.

Industries with the Most Google My Business Reviews

Industries with the Fewest Google Reviews

The Average Number of Google Reviews by Local Ranking Position 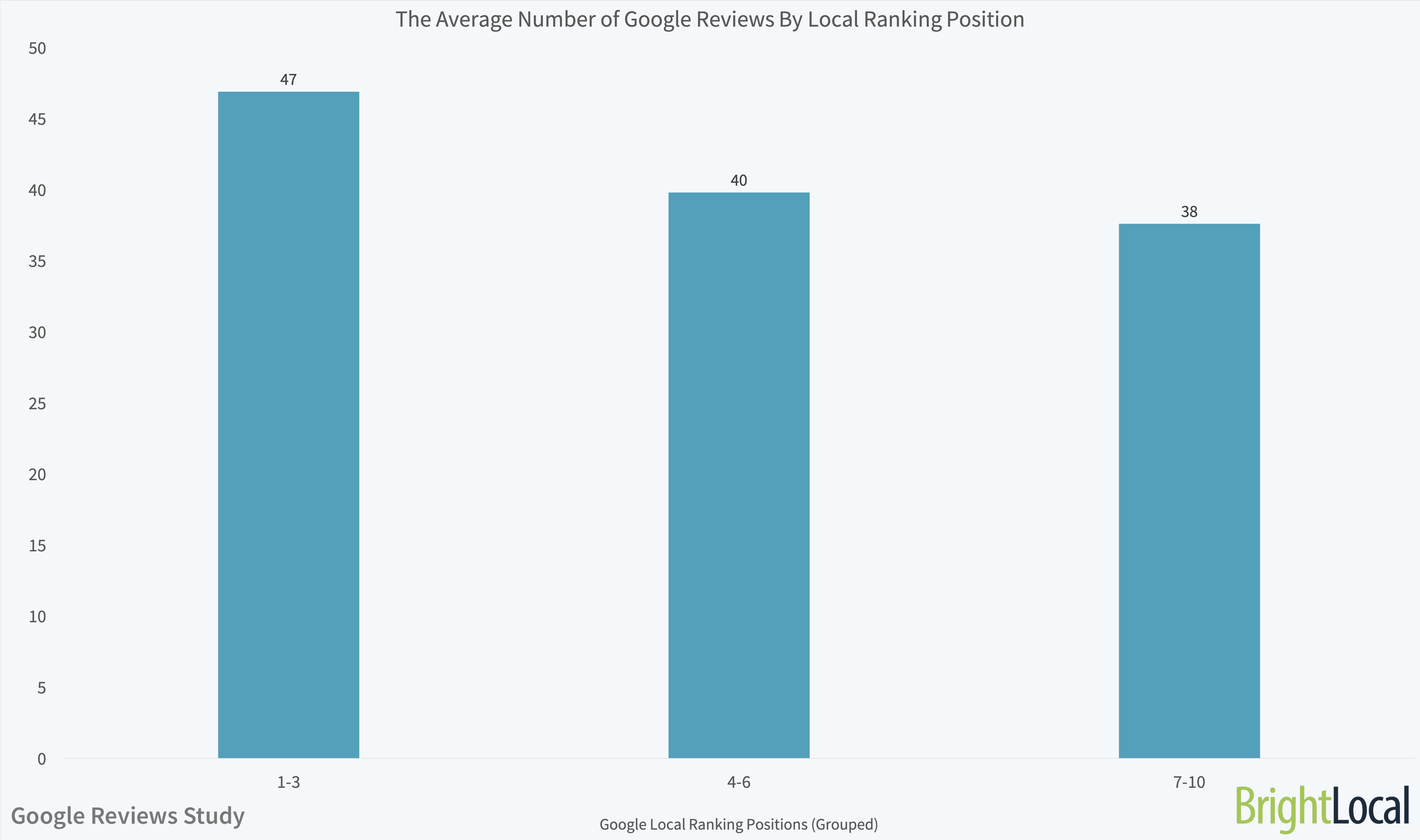 The above chart shows the average number of Google business reviews for each grouped local ranking position, including businesses that do not have any reviews.

There is a clear correlation shown here between higher local rankings and the number of Google reviews a business has. However, businesses with Google Reviews are more likely to be on top of their local SEO game, so it’s not enough to simply say that Google reviews alone cause high rankings.

In our recent Local Services Ads Click Study, we found that 23% of SERP clicks were influenced by visible review numbers and ratings—the majority of which come directly from Google My Business reviews. Reaching the top spots on search results means more clicks, and if this means prioritizing gathering Google reviews, so be it! 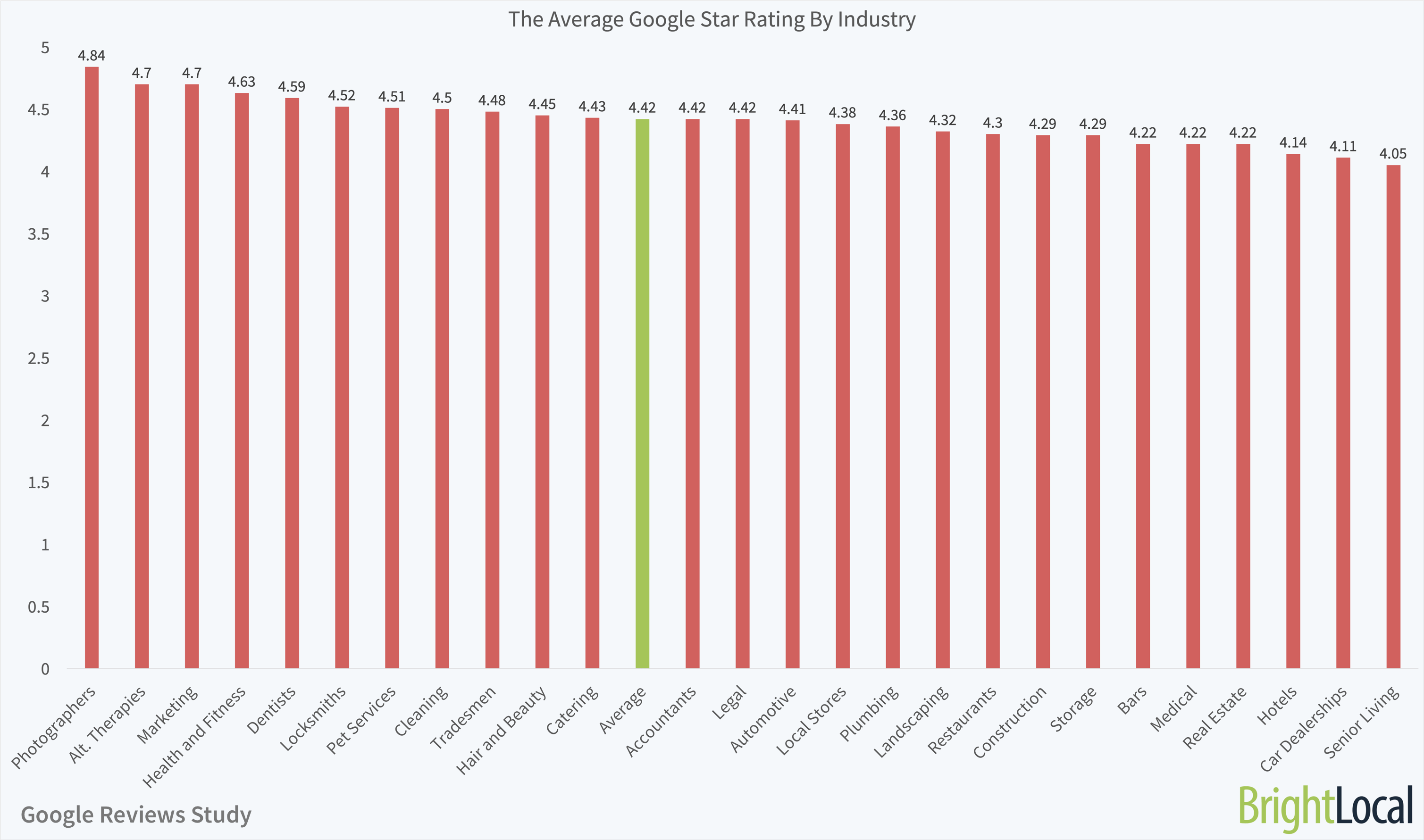 The above chart shows the average Google star rating for businesses in each industry, only including businesses with at least one review.

It’s a positive story for Google reviews, with every industry seeing an average star rating of over 4 stars.

While there are of course businesses with low star ratings (more on this below), on the whole it seems that businesses are far more likely to have a positive rating than a negative one.

And that’s great to see, since our 2019 Local Consumer Review Survey found that only 53% of consumers would consider using a business with less than 4 stars. With Google reviews being so prominent in SERPs (and the local pack and Local Services Ads in particular), these are likely to be strongly influencing purchase decisions, even for those who would never think to check a review site directly.

Despite their high average number of reviews, car dealerships are among the industries with the lowest average star ratings.

Hotels and B&Bs are also notable: they have a high number of reviews on average, but a comparatively low star rating. Some industries like these tend to attract those with more extreme opinions, meaning that customers leave reviews because they are very incredibly pleased or incredibly dissatisfied with the service (with little gray area in between). Customers of other industries such as stores, accountants, or cleaning services may feel less inspired to leave feedback.

To find out more about the different industry trends, explore the interactive graphic above. 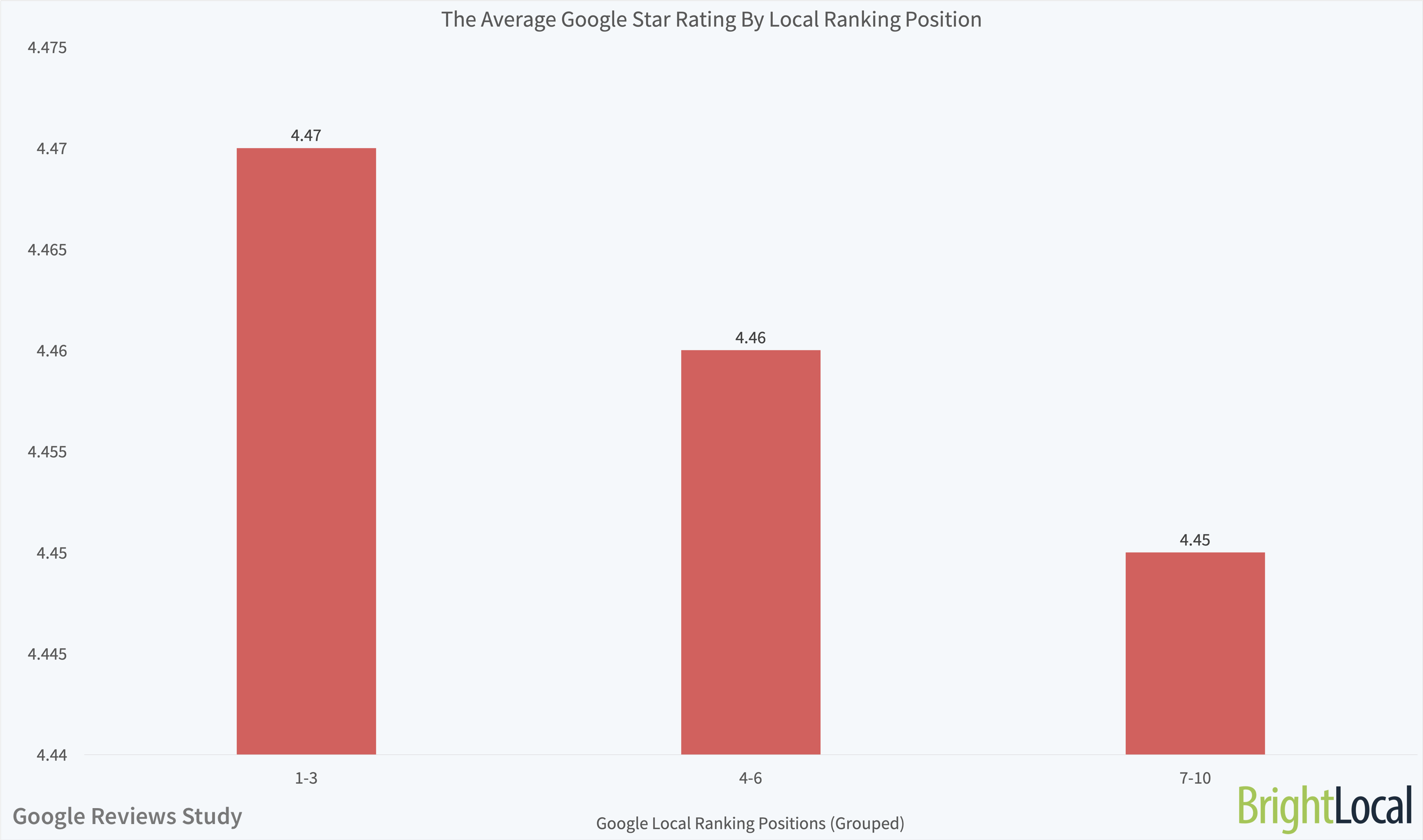 The above chart shows the average Google star rating for each grouped local ranking position, only including businesses with at least one review.

The average star rating of local businesses in the top 10 is very similar across groupings.

While these are only small differences, these could be the difference that could tip the balance for businesses wanting to show above competitors in search results. Our Local Services Ads Click Study found that comparatively high star ratings encouraged searchers to choose one business over another. Every review counts! 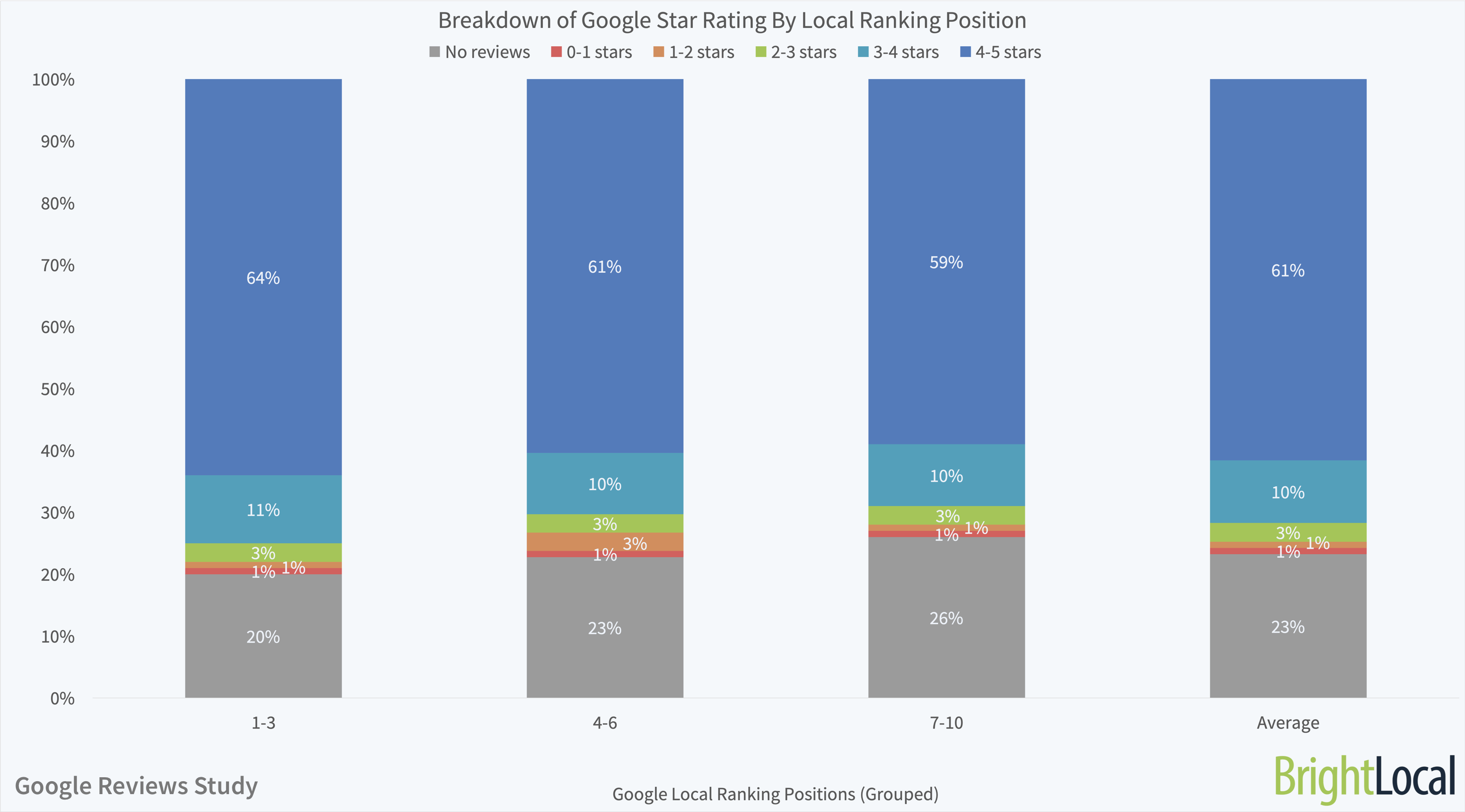 Businesses ranking in Google positions 1-3 are more likely to have a high star rating than those lower in the top ten—with 64% of businesses with the top star rating taking these key positions.

Yet, interestingly, 20% of businesses taking the top 3 spots in Google Local don’t have any Google My Business reviews at all – further highlighting that fact that other local ranking factors remain crucial.

Those at the top are more likely to have Google My Business reviews than their counterparts lower down the table. And when we remove the businesses without Google reviews from the data, this trend remains. While this isn’t the case in every industry, this pattern does follow in most cases.

Explore this in more depth in the interactive graphic above, and let us know which industry trends most interest you in the comments below!

For this study, we explored anonymous data for 93,845 local businesses across 26 different industries.

To do this, we identified 10,334 local keywords related to common industries and used these to identify the ten top ranking businesses in Google Local for each search term. We then explored these businesses’ Google My Business reviews profiles—including star rating and number of reviews—and reviewed these against their local ranking positions. In some cases, businesses may have appeared multiple times in the data due to ranking in multiple positions, but these have been removed for non-ranking related findings.

In line with BrightLocal’s audience, the dataset is based on businesses across the world, with the majority from the US, Canada, Australia, and the UK.

While we did our best to include as many local industries as possible, we focused on a set of 26. If you’d like us to consider your industry for future data-led reports, please get in touch and we’ll see what we can do!

For more information on this study, or for any questions you may have about the Google Reviews Study’s findings, please let us know on content@brightlocal.com.

How many Google My Businesses reviews do businesses in your niche have? Leave a comment below to let us know how Google reviews fit into your reputation management strategy.