Update – In late May, Google’s Danny Sullivan responded to Joy Hawkins confirming that the early May local flux was based on a bug, rather than a local algorithm update. This issue was resolved, and rankings should have stabilized.

Just wanted to update. Thanks for the examples. They helped us find a bug that we got resolved about about two weeks ago, and that seems to have stabilized things since.

On May 4, Google announced the latest algorithm update to hit organic search, the ‘May 2020 Core Update‘. While SEOs worked to understand the impact of this on their clients, we began to notice a lot of movements among local results as well.

Later today, we are releasing a broad core algorithm update, as we do several times per year. It is called the May 2020 Core Update. Our guidance about such updates remains as we’ve covered before. Please see this blog post for more about that:https://t.co/e5ZQUAlt0G

On May 5, our local algorithm tracker Local RankFlux began reporting significant ranking fluctuation — peaking on Friday with a huge 5.58. To put this into context, a “normal” level of flux sits between 2.2 and 2.8 — so doubling this level represents very unusual activity. In fact, this is higher than the neural matching changes back in November 2019 (the previous peak for Local RankFlux activity).

There has been discussion of local ranking changes among the local SEO community since late April, with Local Search Forum members discussing changes starting April 23 (correlating with scores of 3.11 and 3.57 on April 23-24).

However, there has been no formal confirmation of any algorithm update that is known to affect local rankings, with Google’s Danny Sullivan responding to Joy Hawkins:

So there’s nothing in particular we know of that should be doing this. Which isn’t to say it’s not happening, just no major updates or anything like that. It would be useful if people have any recent examples. If they see it over the past day or two or so, or see it forward.

So, if there isn’t a known local algorithm update, what could be happening?

The spike on May 8 could signify a mass of rankings returning to their pre-April 24 places, after a slow period of change over the past few weeks. Since Saturday, May 9, flux has dipped back to a more usual level, which could indicate that rankings are starting to stabilize. Let us know in the comments how your rankings are being affected.

Across the forums, we’ve seen lots of businesses reporting normally well-performing businesses bouncing around local results, with many seeing large drops followed by returning to normality soon after.

Finally seeing some strong upwards movement on a few locations that had seemed “stuck” for a while no matter what we did. 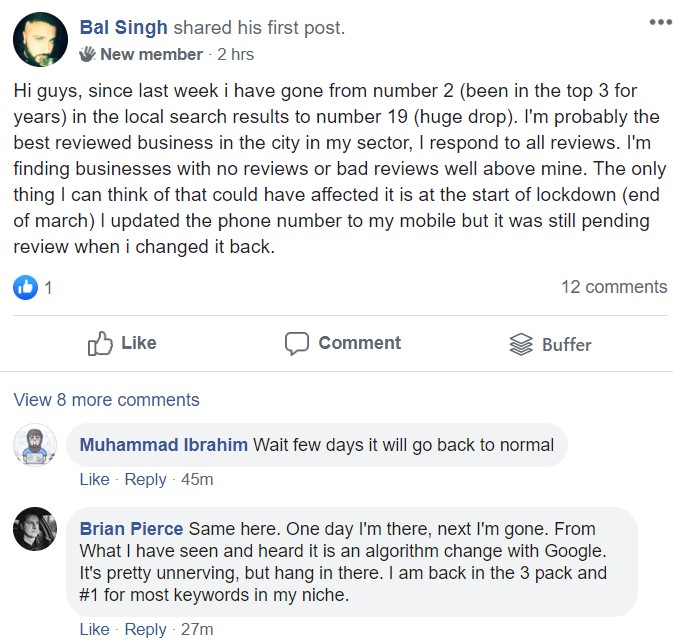 Some SEOs are also reporting an increase in spammy listings. This was also the case during the November update, though things soon improved once results began to settle.

Anyone seeing a recent uptick in GMB spam / poor quality local results which may or may not be related to last week’s core update?

There have also been suggestions of Covid-19 post types affecting GMB listings — although with Google posts’ relatively low usage, it feels unlikely that this could the cause of such high levels of volatility.

Looking at an industry level, it’s important to note that each niche appears to have different expectations of daily ranking changes, with hospitality businesses tending to see high levels of change, while some service-area businesses see comparatively low flux.

We compared last week’s flux peak with the same time in April — a seemingly more “normal” time for rankings — to identify which industries are likely to be seeing the biggest difference from their own usual score. You can sort the table below to see which industries saw the highest flux in this time period.

When looking across the different industries, we can see this increased fluctuation seems to be affecting most industries significantly — with locksmiths, tradesmen, and cleaning services seeing the largest overall change in their own usual levels of fluctuation. While they are working from a smaller base, this signifies unusual flux in these areas, though still far lower than some industries would expect to see on a “normal” day.

To look solely at the highest industry scores, the most volatile industries between May 5-8 were hotels, bars, and restaurants — all of which see high flux on a regular basis. Looking beyond these, real estate, car dealerships, medical practices, storage, and legal all saw a lot of local ranking change.

What To Do Now

As always, our advice to local businesses facing significant rankings changes is to wait and see what happens. Algorithm changes are rarely completed in a day, with Google estimating the May 2020 Core Update will take up to two weeks to be complete. Whether the local flux is linked or not, it makes sense to not make any big changes before knowing the full effect of these updates.

The May 2020 Core Update is now rolling out live. As is typical with these updates, it will typically take about one to two weeks to fully roll out.

We know it can be stressful when your rankings drop, especially when it’s unclear what, or even if, an algorithm update has taken place. I’m sure Google would be keen for me to say that tweaks are being made to the algorithm all the time, but this does seem significant compared to usual levels of ranking change.

We’ll continue to monitor local rankings on a broad basis, and we recommend you track yours too to see where you end up — you can sign up for a 2-week free trial to try out our own Local Rank Tracker.  And, for further advice on how to rank for local searches, read our guide to local SEO ranking factors.

How have your local rankings changed over the last month? Let us know any changes you’re seeing in the comments below!

We’ve all been there: you fire up your ranking-monitoring tool of choice. You see a massive change in rankings. Your heart rate increases. WTF? Was it something you did? Was ...

Ranking in local search is becoming more difficult every day. Why? Competition. The Google local algorithm is constantly updating to ensure that search results best match the intent behind a ...