The objective of this survey is to understand & share which online marketing channels are driving most traffic, calls & offline visits to local businesses. This covers all types of local business from Plumbers to Accountants.

With incomplete data in Google Analytics, no consolidated call tracking data & many consumers converting offline, there is limited concrete data on the ROI & quality of leads by each channel which business owners & search marketeers can base their decisions off.

We hope that these findings ‘fill in the blanks’ and help our customers & readers make some more informed decisions about where allocate their marketing effort & dollars.

This survey is an update from a previous survey we ran in 2011.

We asked all of our customers, readers & industry contacts to participate so that we could build up a clear & accurate set of data which answers 5 simple questions.

Given the imperfect information available we know that the following findings are approximates.

We had 288 respondents who claimed to have ‘optimized’ over 7,100 locations in the last 12 months, which gives us a sizeable sample to draw decent findings & conclusions from.

Who responded to the survey? 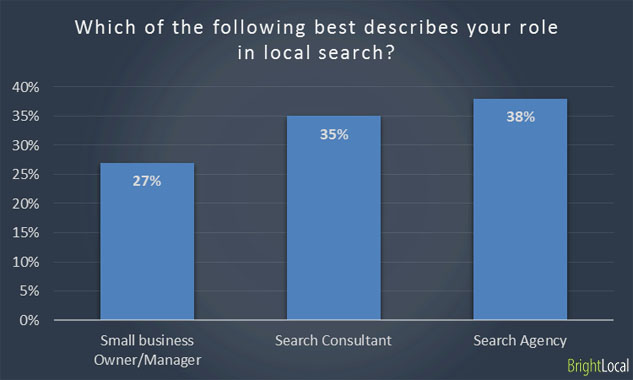 The majority of respondents work as consultants/agencies (73%) and work across a large number of clients/locations. On average each respondent worked on 24 locations in the last 12 months with some claiming to have worked on over 100.

Which marketing channels have you used?

This chart shows what percentage of respondents used each of the channels in the last 12 months. 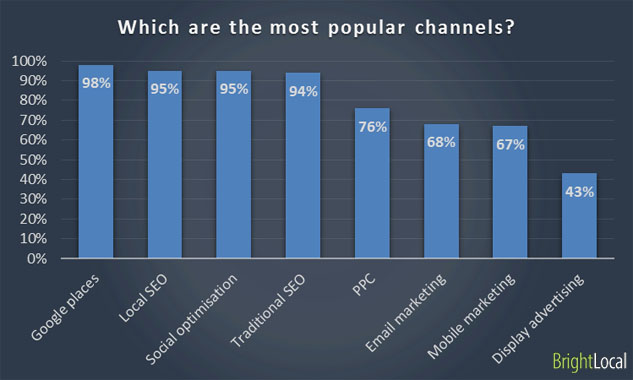 Please note that Facebook & Twitter have both been grouped as social optimization for the sake of this chart.

There is very little between the four most popular channels. It shows that local businesses are also largely in favor of more sustainable, long-term tactics for marketing, and that paid-for techniques such as PPC & display advertising are, whilst still fairly common, less widely used. Both mobile & email marketing may be considered short-term solutions, or channels which are best used for supporting individual campaigns, rather than a wholesale strategy.

Q1. In a typical week, how much time / effort do you allocate to the following channels? (10 being most effort, 1 being least effort) 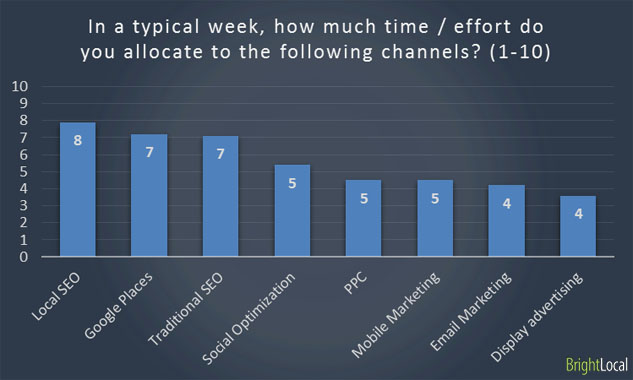 Obviously with a survey panel that has strong roots in local search, it’s not surprising that this particular channel received more effort & attention than other channels. Some of the more traditional off-site marketing channels such as online display advertising & email marketing came very low on the scale in favour of on-site methods.

It’s highly likely that local business may engage in email marketing to existing & new customers but that this is handled in-house so their SEO consultant/agency doesn’t report on use or success in this survey. We certainly champion the value of growing an email list and engaging customers via email – it’s an excellent retention tool for most businesses.

Rate the effectiveness of each channel to deliver a return on effort/money spent? 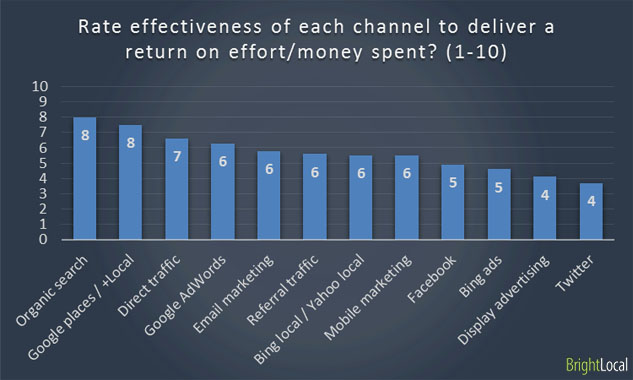 Local SEOs put more effort into local & organic search related tasks, and this is appears to be time well spent as organic search is considered the most effective channel in terms of ROI.

Twitter stands out as the least effective channel in terms of ROI. We’ve already seen that a fairly reasonable amount of effort is spent on social tasks but perhaps this reinforces the fact that Twitter is great for keeping up to date with industry news and for communicating with existing customers, but maybe it’s not effective for creating new leads & winning converting customers.

Rate the effectiveness of each channel to deliver high quality leads. 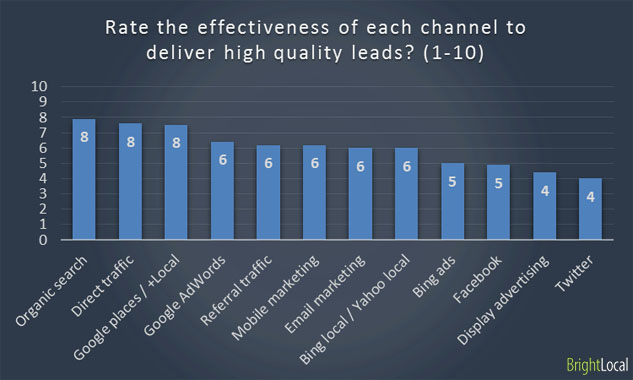 Organic search, direct traffic & Google / +Local deliver the highest quality leads, whilst once again we see that Twitter is not considered a quality source of new leads.

Interestingly, Google AdWords is seen as a strong lead generator, but less time / effort is spent on paid traffic than social tasks.

Approximately what percentage of site traffic is generated by each channel?

Please note that not all respondents used every single one of these channels, and some did over or under-estimate the percentage of traffic generated across all channels.

Therefore we advise that you should view the percentages as approximations and instead pay more attention to the hierarchy of results – i.e. which channel wins out vs another. 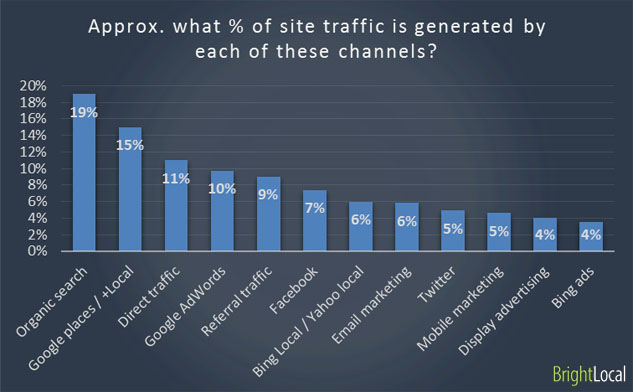 Analysis:
We’ve already seen that organic & Google Places / +Local deliver the best quality leads, as well as some of the best ROI. Now we can see that as well as quality traffic – these channels also deliver in terms of the overall amount of traffic.

Approximately what percentage of calls are generated by each channel?

Again, we advise that you should view the percentages as approximations and instead pay more attention to the hierarchy of results – i.e. which channel wins out vs another. 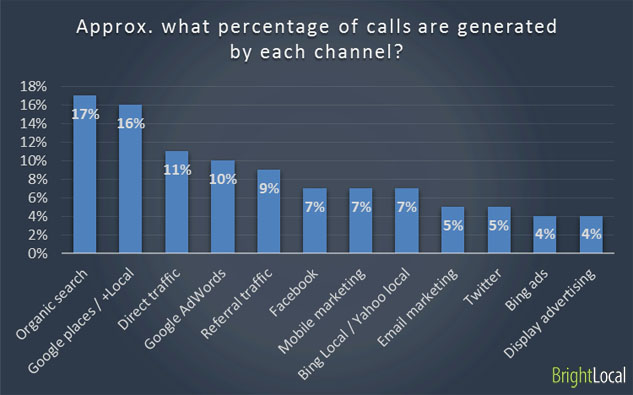 Once again, organic, Google Places + Local and direct traffic are the highest performers. These channels are key when it comes to delivering not just web traffic, but also generating phone leads.

With the immediate nature of paid advertising, we could have expected to see Google AdWords & Bing Ads performing better at generating phone leads. However, these channels are rated on a par with the average performing social networks.