As first reported by Mike Blumenthal last Thursday, Google have confirmed that anonymous Google reviews have been removed from public view, stating:

Mike had already done the sterling work of reporting on their disappearance from review counts at the end of May. Then, a couple of days after reviews from ‘A Google User’ (i.e. anonymous) were removed from review counts, the reviews themselves were expunged completely.

However, it has taken until now for Google to confirm the change, which has obviously had a significant impact on local business owners and reputation managers. Over the course of a weekend, many saw their average star rating change and total number of reviews drop.

How many Google Reviews are anonymous?

BrightLocal has been monitoring the reviews of our reputation management customers for many years now, so we decided to query our database to learn what proportion of posted reviews were from ‘A Google User’ and what this has looked like historically. 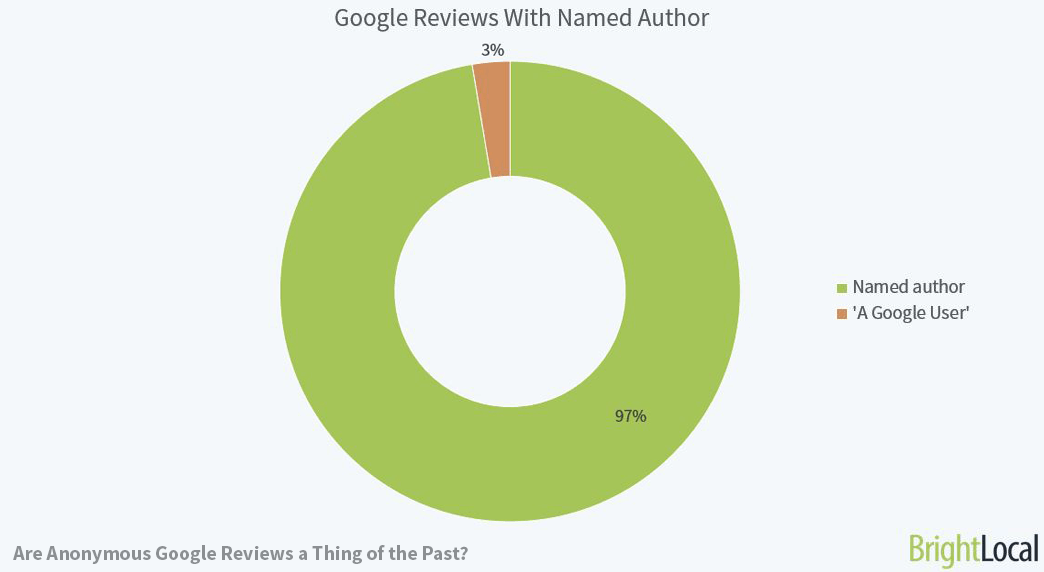 We looked at nearly 2,000,000 Google reviews for over 40,000 businesses posted over the last decade and found that 3% (just over 50,000) of these were anonymous. All of these reviews, if they were still publicly viewable at the start of May, would not have been visible by the end, thanks to the Google purge.

We then looked at how many of the Google reviews BrightLocal has been monitoring were anonymous, on a year-by-year basis. It should be noted that the size of the database has grown over the years, so these figures aren’t the result of an exact science (also note that 2018 is H1 only), but they still point to a clear trend. 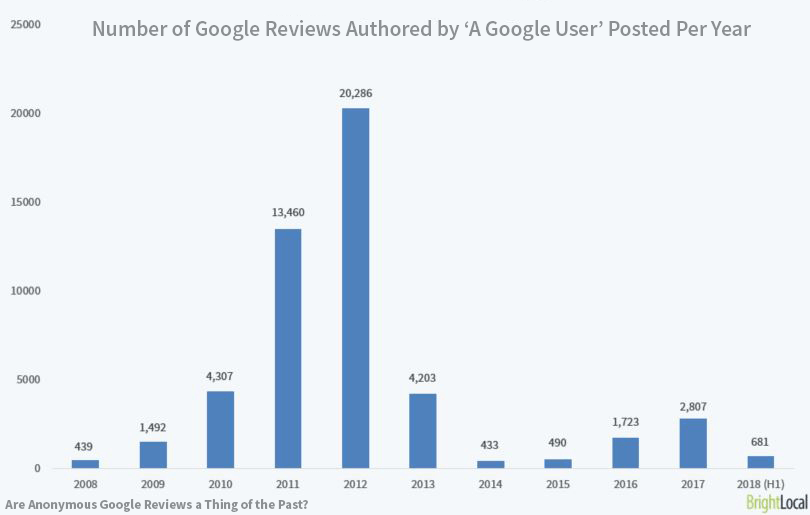 It would seem that May 2018 isn’t the first time Google has removed anonymous reviews en masse. It’s clear that in 2013 work was being done to remove anonymous reviews (Mike Blumenthal tells us this was likely a result of Google introducing the new requirement for a Google+ persona in order to leave reviews), which had been growing exponentially in the previous five years, across the transition from Google Hotpot to Google Reviews.

What is the average star rating for an anonymous Google review?

One impact of the recent removal of anonymous reviews is obviously going to be in the reduction of total reviews for any given business, but that could turn out to be a good thing: we compared the average star rating of reviews with a named author and anonymous reviews and found a difference of 0.2 stars. 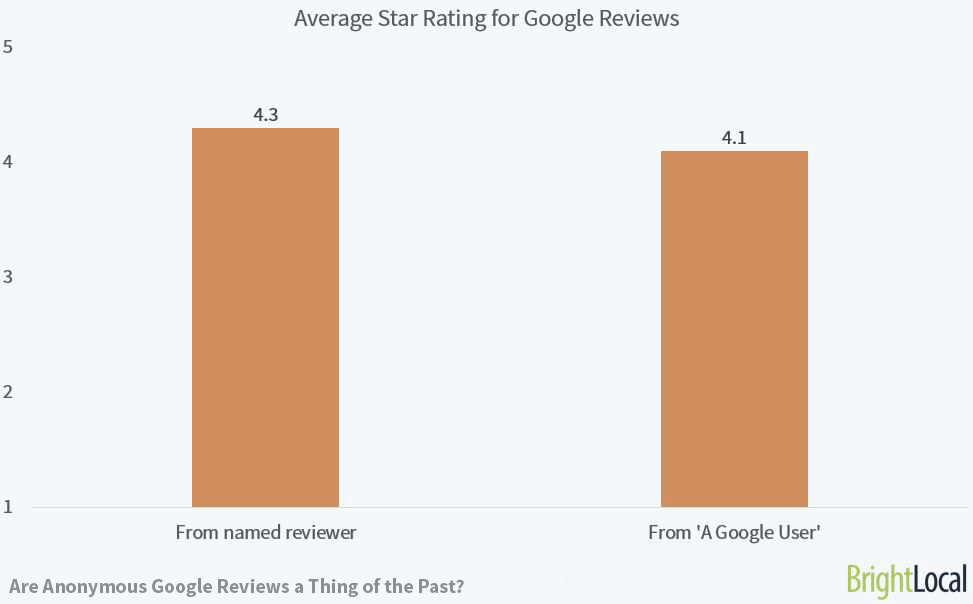 This suggests that, overall, business owners and reputation managers have reason to be happy in the long-term, as the anonymous reviews dragging their star rating down will be gone, leading to a higher average star rating.

This is good news in the long run…

Online reviews are critical to local businesses today, with consumers reading an average of 10 reviews before trusting a local business. Google reviews are particularly important — average star rating has an impact on click-throughs and rankings, and Google is the fastest-growing review site.

Google’s cull of anonymous reviews is a step in the right direction, as it should deter fake reviews.

As reputation is clearly a significant factor in the decision to purchase, business owners and consumers alike are paying more and more attention to average star ratings and review content. However, the reliability of that content has been in question for a while, with the prevalence of fake reviews being a particularly sore point (82% of consumers read a fake review in 2019).

This year’s cull of anonymous reviews is a very important step in the right direction, as it will discourage users from leaving reviews under anonymity. We would hope that this will have the knock-on effect of slimming the numbers of fake reviews on Google and improving searchers’ trust in Google reviews.

Mike Blumenthal shared his take with us:

“If this results in more careful vetting of user accounts and high accountability for those that are fake, great! But in and of itself this action is unlikely to impact the world of fake reviews.”

Over the Top Marketing’s Jason Brown actually noticed that not all reviews had been expunged, as promised by Google:

“This was merely retroactive and not proactive. I noticed that new “A Google User” reviews were created and posted last week. There is also a review solicitation company creating thousands of A Google User reviews. Those reviews go back 5 years and have yet to be removed. This was Google merely scratching the surface. They have a long way to go.”

While this is great news in the long term, with an end to fake reviews potentially in sight (albeit very far away), in the short term it has caught many local businesses by surprise, and left them asking where so many of their reviews have gone.

Communication with Google is one of the top five things GMB users want to see improved.

As seems to be par for the course with Google, a lack of communication was the biggest issue here. (In fact, ‘communication’ was one of the top five Google issues our users and visitors wanted to see improved in a recent poll.)

While Google has shown a willingness to improve the local searcher’s user experience by releasing significant improvements to and features for Google My Business, the lowly business owner, as ever, is left by the wayside.

Mike Blumenthal said it best himself:

“This culture, largely secretive and engineering driven, thinks that their actions have little impact and thus don’t have to be explained.”

Here’s hoping the next major change doesn’t happen behind the closed doors of Googleplex.

We’d love to hear what you think

How has the removal of anonymous Google reviews affected your or your clients’ average star ratings? Have you noticed that these reviews were markedly differently from those from a named author? Let us know in the comments below.

Build a brilliant business with a 5-star reputation

Jamie Pitman
Jamie heads up BrightLocal's content team, ensuring we produce insightful articles, research and resources that enable businesses and SEOs to get even better results in local search.
See all of Jamie's articles (117) Follow Jamie on Twitter

[UPDATE MARCH 17th, 2021: Google has released a free tool specifically for escalating review removal requests and managing and tracking those escalations. It’s not particularly suited to agencies that manage ...