UPDATE OCTOBER 2021: The recent iOS 15 update has improved the Apple Maps experience, with many exciting developments for local marketers. Read all about the iOS 15 improvements.

It’s been a big couple of weeks for map apps. Who knew getting from A to B could be so thrilling?

On January 30, 2020, Apple announced a whole host of new features for its Maps offering. If that wasn’t quite enough action to satisfy your need for direction-providing services, soon after, Google unveiled a shiny new look and plans for its very own new features.

I struggle to believe there was ever a time I survived without Google maps. https://t.co/2arbHAb3mr

But when it comes to being crowned King of the Maps, who will take the throne?

Read on to learn about Google Maps’ new celebratory features, and find out how Apple Maps is striving for feature parity.

In anticipation of its 15th birthday on February 6th, (sidenote: how much cake do you think is being eaten at Google HQ right now? ? Update: Turns out it’s a whole lot), Google announced that it was refreshing its well-used Maps app, as well as introducing a host of new features and bringing existing elements to the fore.

Once a simple map, the app icon is now a colorful pin. Most likely this change is designed to reflect the app’s transition from mere directions-provider to one-stop-shop for all your favorite places.

Going beyond the logo change, users can expect to see a bunch of existing app features brought to the fore. Navigation items such as ‘Contribute’, which were once hidden away behind multiple menu items, will now be front and center. According to Google, the new display will look a little something like this:

With CTAs like ‘Contribute’ taking center stage, users will be encouraged more than ever to share feedback with restaurants, plumbers, and other local businesses they choose to visit. As predicted by several members of the local SEO community, this feature supports the idea that Local Guides will continue to gain prominence, and Google will increasingly encourage users to leave reviews.

Among the new features will be a new function for Live View. Now users who don’t want step-by-step directions can get general guidance and reassurance so they know they’re going in the right direction, without having to hear “Turn Left” (or similar) every few minutes.

From March onwards, we can also expect to see new features relating to public transport, something I’m sure many day-to-day users and frequent commuters will view as a godsend. Among the new features, users will be able to see how many coaches a train has, the temperature on board, and whether or not there’s security on the service. There will even be an option to tell Google if a train has a designated women’s area.

Once again Google will be encouraging users to submit their own content, meaning features like these will rely on a user’s ability to submit data reliably. Google already provides crowdsourced information about how busy train services tend to be, and using the same sources for these new details should ensure their credibility and freshness.

After all that excitement, you might be wondering “How the heck can Apple top all of that Maps-y goodness?” Well, interestingly enough, the tech provider hasn’t tried to top Google at all. Instead, the new features aim to create parity between second-place Apple and front runner Google, making the former option more enticing and prompting users to transition. This should also help to bring Apple’s devoted followers, some previously reluctant to make the move, back into the Apple fold.

Announced at the end of January, Apple’s updates are already in full swing in the US, while Europe can expect to see changes roll out in the next few weeks and months.

As Google continues to innovate, Apple is playing catch-up, releasing several Google Maps-adjacent features such as: 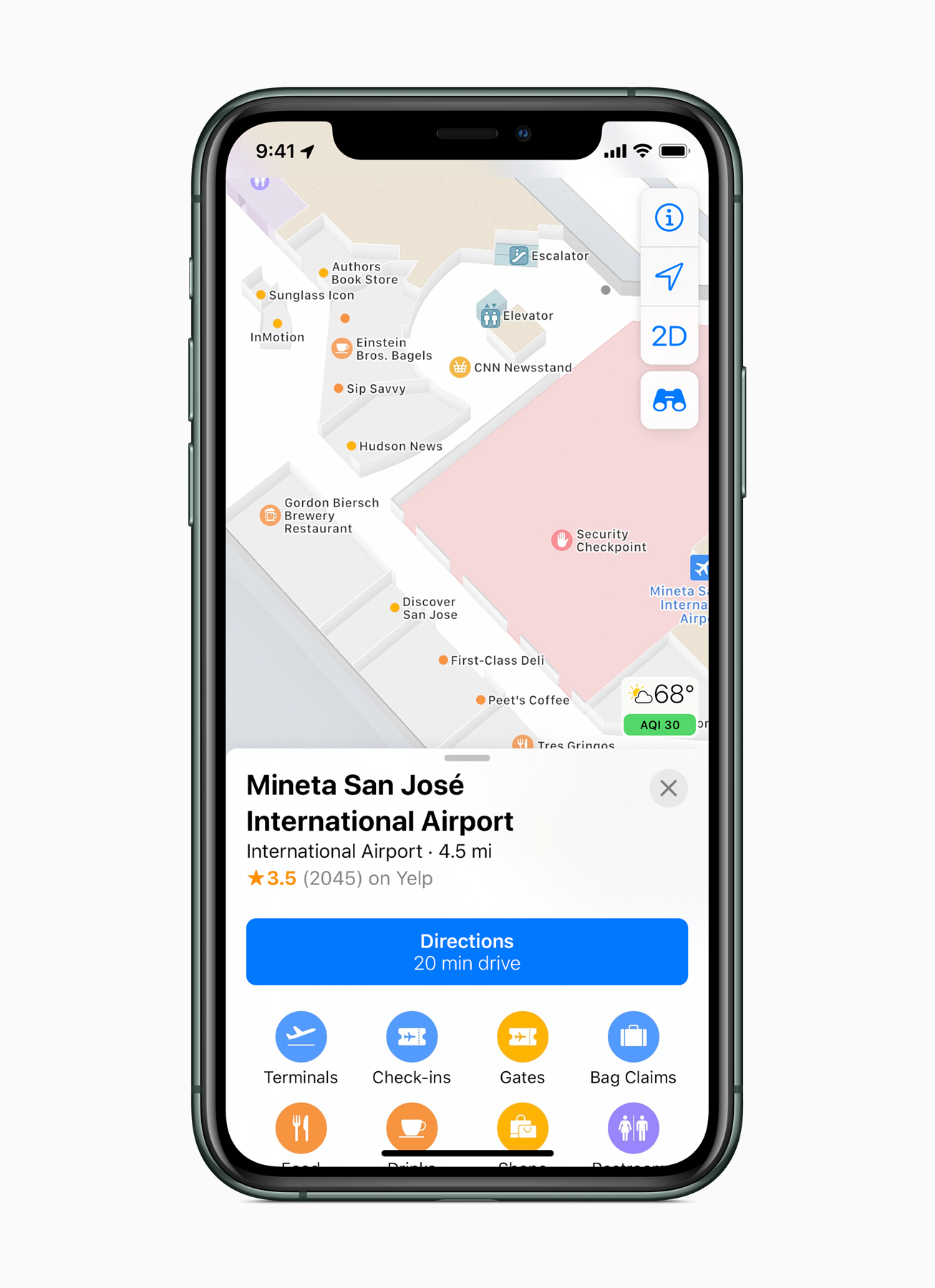 While those features may sound tempting (maybe not quite tempting enough to make the switch, but pretty close nonetheless) Apple has provided details on one “breakout” feature that could see users trading allegiances.

It’s the word on everyone’s lips, the reason the likes of DuckDuckGo are paddling back into relevance, and something we should all be concerned about in this day and age: privacy.

At the end of Apple Maps’ press release, the company offers further information on what their new app means for users’ data collection.

Apple is committed to keeping personal information safe and has built privacy into the core of Maps. With Maps, no sign-in is required and it is not connected to an Apple ID in any way. Personalised features, such as suggesting departure time to make the next appointment, are created using on-device intelligence. Any data collected by Maps while using the app, like search terms, navigation routing and traffic information, is associated with random identifiers that continually reset to ensure the best possible experience and to improve Maps.

Maps goes even further to obscure a user’s location on Apple servers when searching for a location through a process called “fuzzing.” Maps converts the precise location where the search originated to a less-exact one after 24 hours and does not retain a history of what has been searched or where a user has been.

The ability to use Apple Maps ‘anonymously’ (unlike Google Maps’ offering of incognito mode, where users are still required to log in) could certainly persuade some users to make the switch.

Don’t love Apple sitting on another tech domain, but hell if I’m going to give my travel and location data to Google. Apple Maps used to suck, but now it’s actually good (in the US). If its been a while since you tried, you should give it another shot. https://t.co/TkAaCktjl6

What does this all mean for local SEO?

For local SEOs, these updates don’t really mean a great deal. Sure, there are some exciting features you might want to try out and keep tabs on, but there really are only two key takeaways from this whole thing:

Aside from those two things, these updates shouldn’t affect local businesses in any serious way.

There’s been very little chat on Twitter or Local Search Forum about the updates, so that alone should tell you something about how important these updates are for the local SEO community.

Who will prevail as King of the Maps?

While it may be growing wider, it looks like the Apple versus Google divide is still leaning in favor of the world’s best-loved maps provider.

Apple Maps: I know a short cut down this dark ass ally. Take it all the time. Yeah the streetlights are always out and that guy was just taking a shit in the street but what’s life without a little risk, ya know?

I have had both on at same time. to give me directions on car play and am continuously surprised how much better and accurate google maps is over Apple Maps.

In other news, it looks like the two maps providers have taken their stand-off to the street. Both Apple Maps’ and Google Maps’ street view cars were spotted facing off head-to-head on the streets of Manhattan.

When it comes to getting from A to B, which Maps app will you be opting for in the future? Has your opinion been swayed by any of these recent update announcements?

We want to know who you’re elevating to king of the castle—pop us a comment below and let us know who’s got your vote. Has Apple done enough to rise to nobility?

Regardless of which service you opt for, we wish you the best of luck in getting to your location safely, quickly, and enjoyably. Happy mapping, friends!

In this new interview series we talk to the people who make a real impact on local search, through their insights, their tools, or their good-old-fashioned hard work. First up ...

Google just announced a feature that should come as no surprise to anyone who wondered how they would fill the void left by Google+. In an announcement on their blog ...

This week SEOs web-wide were shaken, as Google’s public search liaison Danny Sullivan announced a big change to featured snippets. Not sure if you’ve been tipped off yet @rustybrick but ...