Another year has almost come to an end. It’s easy to forget how quickly the local search space can change, even over such a short period of time.

In this yearly review, we want to take a look back at 2014, and the impact it has had on the local search world. We’ll review the biggest changes & updates that have shaken up the industry along the way.

We’ve also posted some handy links to read more about a particular news story should you want to. Thanks to all the sources mentioned for all their super work in keeping us up to date in Local SEO.

The year started with thousands of hotel listings in Google+ Local having links leading to their official sites “hijacked” and instead replaced with ones leading to third-party booking services. After some deliberation, Google said it was aware of the issue & was working to fix it.

In January, Yelp CEO Jeremy Stoppelman discussed what his company had been doing to combat fake reviews. The interview in The Telegraph revealed that by the start of 2014, Yelp had slapped 285 listed businesses with Consumer Alerts – which were originally introduced in 2012.

In a follow-up to the SMB Internet Marketing Survey 2013, BrightLocal revealed that Health & Medical SMBs spend more on marketing than the average SMB. The average marketing spend was $475/month (16% higher than the all-industry average).

Yahoo tipped it’s hat to Google with an update to its local search results;

“Whether you’re searching for the nearest open restaurant or your local coffee shop, you’ll see a snapshot of the business alongside our refreshed Yahoo Maps experience”. – Yahoo

Microsoft reportedly signed an agreement to license Foursquare data for both mobile and Bing on the PC; “This will help us continue to build out our product, and, even more excitingly, make sure more people get access to the power of Foursquare”, a statement said on their blog.

Yelp released its Q4 2013 financial results, reporting end of year net revenue at $233 million. This was a 69% year-over-year growth from 2012. “It was a phenomenal year for Yelp”, said CEO Jeremy Stoppelman.

Product, Price, Place & Phone number were revealed as the “four P’s” for local business website success. It’s the basic information that potential customers want first and foremost. Visitors to your business website want to quickly establish that your business meets their needs. They are much less concerned about the stylistic nature of your site or what you look like. 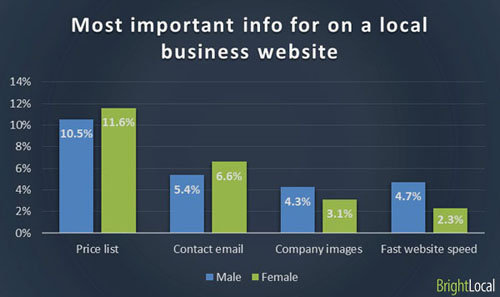 Google Places made an update to its quality guidelines to allow owners to add a descriptor within the business name. Jade Wang announced the changes in the Google Product Forums. In summary, Google was allowing a single descriptor if that information described your business offers.

A new feature allowed users to search “show me the menu for <insert restaurant name>” & Google would display their full menu directly in the results, without having to click through to another page.

Billed as a “5 star partnership”, Yahoo teamed up with Yelp to show Yelp reviews in Yahoo search results. Now when you use Yahoo Search to look up a US local business, you’ll see user reviews & star ratings from Yelp. 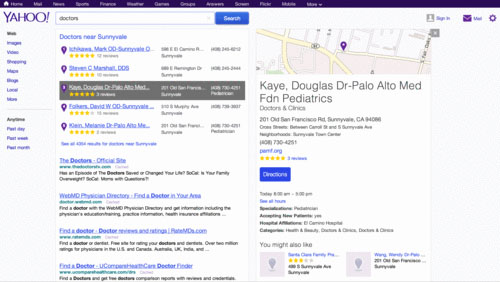 In a new update, some types of businesses could display events information in addition to other local profile elements.

BrightLocal reported that Google returns greatest % of local results for all types of search term. To dominate generic terms, SMBs should focus on optimizing their local search listings, and to dominate long tail terms, SMBs should build out service & long-tail content on their own sites.

Bing announced they now offer driving directions in the form of a quick answer; “Recently, we rolled out a faster way for you to get directions between two places on Bing. Now, when you search for driving directions from say, Los Angeles to San Diego, we’ll surface the estimated travel time, mileage and map at the top of the search results page on Bing.”

BrightLocal enlisted the help of 20 highly respected & knowledgeable local search experts & asked them 12 questions all relating to Reviews & Reputation Management in this expert survey. In addition, 55% of local search experts believe a review strategy is critical to local optimization.

Jade Wang announced that Google Places had rolled out new features for the bulk location management tool. New features included the “Status” column that lets users know if a Map location is live, unverified, has errors, data conflicts, is a duplicate, or if it is pending review.

Neustar Localeze released the findings from their Local Search Study to reveal that 63% are now using multiple devices to find a local business. 79% of them are mobile phone users, while 81% are tablet users. In addition to this, Restaurants are searched for 23% of the time, whilst Auto services (10%) & Arts and entertainment (9%) come closely behind.

Complaints surfaced that historical good reviews were being lost . Yahoo continued to show its own reviews on a listing until a business gets a new Yelp review. When this happens, the Yelp review replaced the Yahoo review – causing many problems for SMB.

According to Yelp’s earnings report, the company’s revenue for the quarter of the year totaled $76.4 million, representing a 66% growth year on year. Yelp also claimed that average unique visitors climbed to 132 million per month, showing a 30% year-over-year growth. Local business accounts reached 74,000 (65% growth year on year).

Foursquare released a brand new app called Swarm that will exist alongside the current Foursquare app. Swarm was announced as a social heat map, enabling users to find nearby friends & share their location. CEO Dennis Crawley decided that in order to ‘save’ Foursquare, they would have to essentially break it in two, serving up two different apps.

As World Cup fever began to sweep the globe, Google expanded its Street View imagery. All new imagery included all 12 stadiums to be used in the tournament & a 360-degree spin from the center-spot on the pitch. 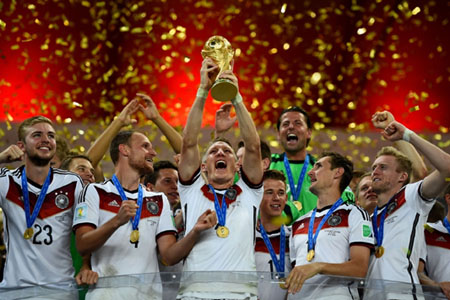 After 5 years of dispute, ABC.com reported that Google Maps had finally launched street view images in Greece. Greek authorities blocked street view 5 years prior due to privacy issues. The report stated that Google had already gathered the necessary imagery whilst awaiting approval from the country, and so two-thirds of the area had already been mapped.

We at BrightLocal recently conducted a survey that examines the sources of traffic and leads to local businesses. We had 288 SEOs and SMBs complete the survey which discovered that SEOs put most effort into Local SEO, Google Places & traditional SEO, whilst Organic Search delivers the best ROI & quality leads.

Google My Business released to the world – Jun 11th

Google rolled out Google My Business, a significant upgrade to Google Places /+Local. It was hoped that this significant new product update would make it “easier than ever to update business information across Google Search, Maps and Google+.”

We were lucky enough to be invited to an exclusive Hangout session with Jade Wang from the Google My Business support team & reported on it the following day.

The end of the road for Bing Ads Express – Jun 18th

Bing Ads Express was being phased out from July 30, according to an announcement on the Bing Ads blog. Bing said in a post. “For many of our Bing Ads Express customers, offering simplified, automated options removes a granular level of control, sometimes needed in reaching their marketing goals.”

At BrightLocal we released the findings of our annual Local Consumer Review Survey, which revealed the growing importance of online reviews in the purchasing decision.

Yelp is the “most influential” local review site – Jul 9th

According to new Nielsen survey data, Yelp is the most frequently used, most trusted and highest quality local reviews site. Beyond Yelp, the other competitors listed were Angie’s List, Citysearch, OpenTable, TripAdvisor, YP & Zagat. The survey was commissioned by Yelp and conducted by Nielsen using a sample of just over 1,000 US users of review sites.

Google shook the local SEO world with an update that dramatically altered some local results and modified how they handle and interpret location cues. Google claimed that Pigeon created closer ties between the local algorithm and more traditional SEO algorithm.

The impact has been widespread and varied – with some businesses and whole industries negatively affected. On November 12th, 2014 we were joined by Mike Blumenthal, Joy Hawkins & Andrew Shotland to review & debate the impact of the Pigeon update in an InsideLocal webinar.

Discussing the Impact of Pigeon Update:

Although it wasn’t till December that Google rolled out Pigeon outside of the US.

After much speculation, Google announced that secure sites would gain favor in search results. Adding encryption would provide a “lightweight” rankings boost to any sites & it was implied that although starting off as ‘light’, this update would gain prominence should the changes prove positive for searchers.

Following up on disappearance of authorship photos, Google announced that they would also be removing authorship markup. Within a short period of time, all authorship bylines had disappeared from the SERPs.

Bing Ads announced enhanced location targeting to include a number of new updates which help advertisers refine their PPC geo-targeting. As well as improved relevancy, other updates supported hyper-local targeting on mobile devices.

Apple announced the iWatch device which included a range of apps and features including Siri, health and fitness, music & maps. Apple iWatch will also perform local search and deliver directions / navigation on your wrist.

BrightLocal released the results of an annual look at the local search industry. Findings included the fact that on average, each local SEO handles 9 clients, the average monthly spend by SMBs on local is $1,020 & 93% of Local SEOs expect to grow their business in next 12 months. 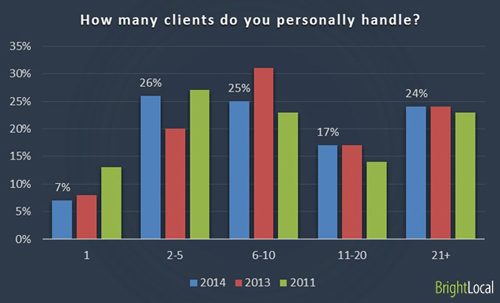 We took a closer look at the stats we collected in the Local SEO Industry Survey 2014, which included:

Later in November, David joined us with Andrew Shotland & Matthew Hunt for an InsideLocal webinar to discuss the 2014 update & the year-on-year changes. 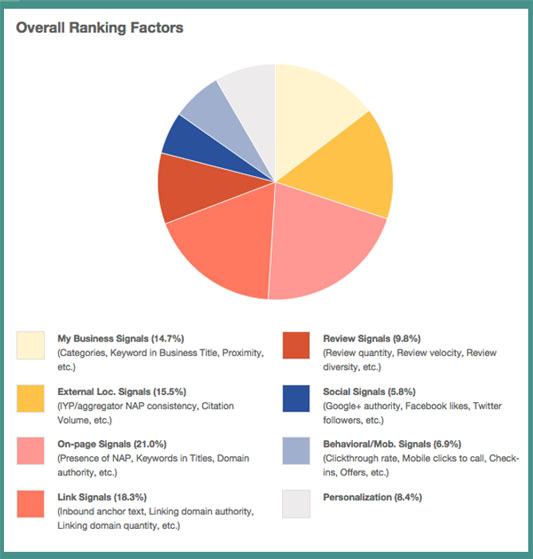 The earlier mentioned division of check-ins & local search delivered a boost to Foursquare, as the company made a conscious effort to differentiate itself from Yelp and other local search apps.

BrightLocal CEO Myles Anderson shared the results of an InsideLocal survey detailing the impact of Google’s Pigeon Update. 69% said that Pigeon had delivered good change for searchers, whilst 53% believed that Pigeon was bad for businesses.

After Google dropped the local search carousel, Bing introduced it for their local search results user interface. Searching for local related queries would now bring back local results placed in a black bar that enabled the user to navigate through.

Google Pigeon Update launches outside of the US – Dec 19th

Late on in December we started to notice significant volatility in Maps results in the UK, Canada & Australia. Early suspicions that this was a result of the Pigeon being rolled out throughout the rest of the world were later confirmed when a Google spokesperson told Search Engine Land, ” I can confirm that this update has rolled out to the UK, Canada and Australia.”