On April 25th, Google My Business sent users a survey that seemed to suggest the possibility of paid-for features being added to the GMB product.

As you’d expect, the local SEO community reacted strongly to the survey, with Mike Blumenthal speculating the survey was “the work of a summer intern”.

But with official results from that survey unlikely to see the light of day, we wanted to find out what local marketers really think about Google My Business potentially becoming pay-to-play (or at least featuring paid-for aspects). To find out, we asked our audience to complete a poll of our own. In this, local marketers and businesses were asked questions including:

A huge thank you to the over 300 respondents who shared their insights and opinions. The makeup of respondents was: 54% marketing agency, 26% local businesses, 12% freelance marketers, 5% franchises and brands, and 3% others. Where applicable, answers have been cut according to business type.

To find out what the experts think about the possibility of Google My Business becoming a paid-for service, watch Greg Gifford, Mary Bowling, Ben Fisher, and BrightLocal’s Myles Anderson debate the survey in our latest webinar on this very topic.

Are you aware of Google My Business’s survey exploring potential subscription costs? 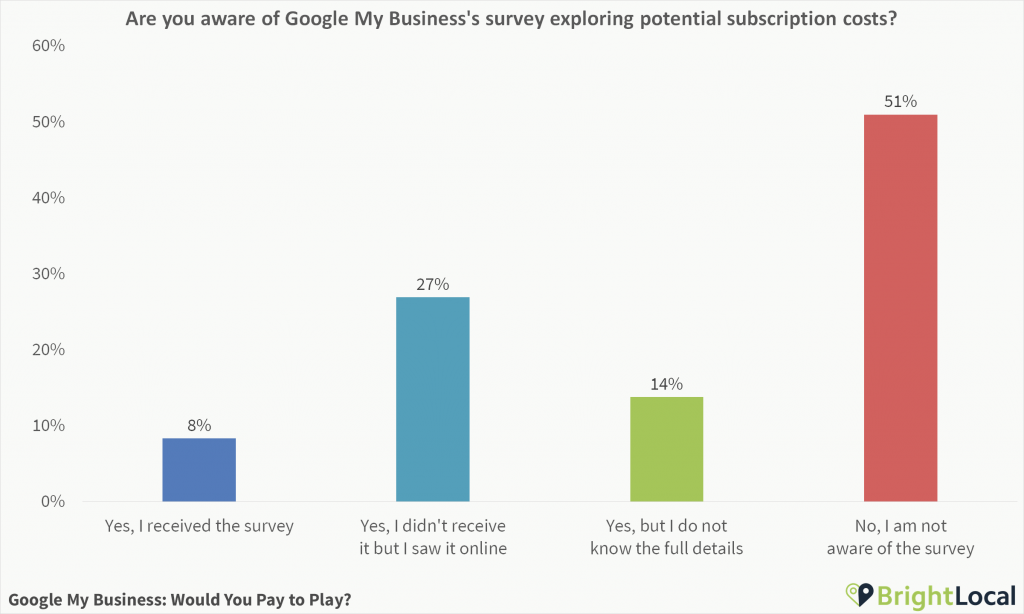 While 49% of respondents were previously aware of the survey from social media, news, or personal experience, a surprisingly high proportion of respondents were not aware. For many, our own poll was the first they’d heard of the possibility of a Google My Business subscription, and as you’ll see below, respondents reacted forcefully to the news.

Just 8% of respondents had received the poll themselves, suggesting that many GMB users were not afforded the chance to share their opinions.

Thanks to Sean Bucher and the local SEO community sharing the “bananas questionnaire” on Twitter, a further 27% of our respondents were alerted to the survey’s existence.

How do you feel about the possibility of Google My Business adding new features and a subscription cost? 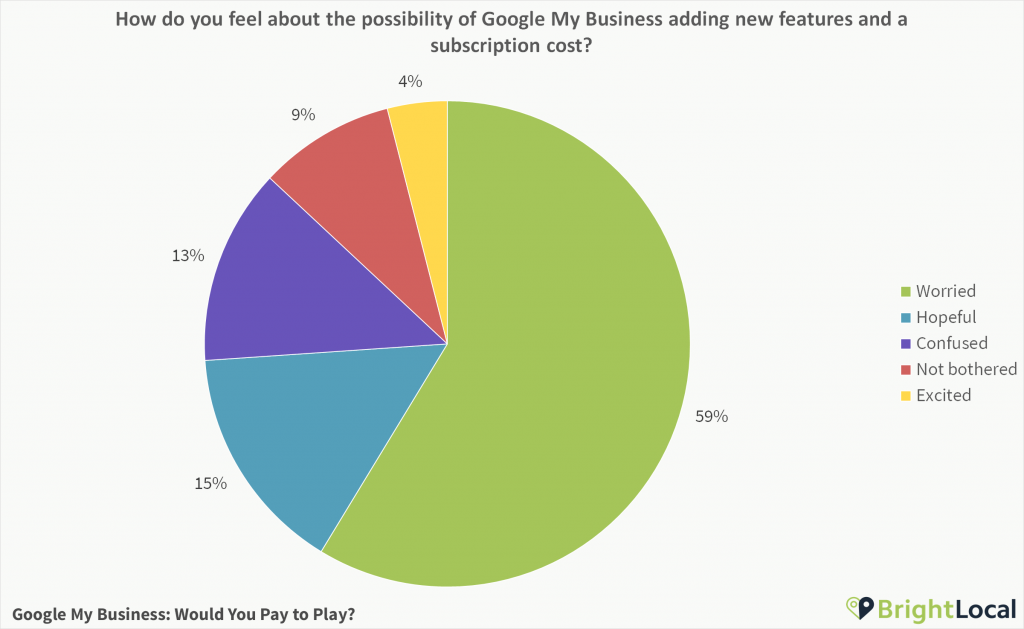 Respondents were asked to choose one emotion to represent their feelings.

Reactions from respondents ranged from excitement to fear, and including plenty of confusion.

For many, the new features proposed by Google represent an acknowledgment of pain points such as spam in listings and difficulty contacting customer support.

But, with questionable pay-to-play features including the ability for competitors to intercept messages from customers on the table, it’s no surprise that the majority of respondents are worried about what this could mean. Find out more on respondents’ thoughts at the end of this article, and let us know in the comments below what you think.

While new features to fix some of Google My Business’s biggest issues would be welcomed by local marketers with open arms, many believe that this could mean GMB becomes only useful to bigger brands with bigger budgets.

Which potential Google My Business features would you be most willing to pay for? 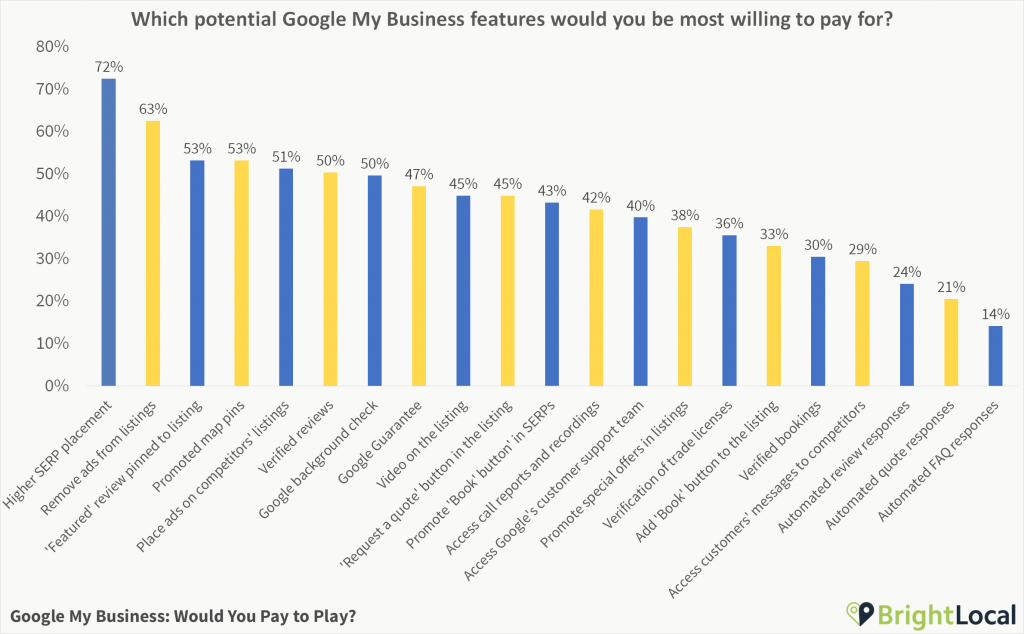 Respondents were asked to choose how likely they were to pay for each feature on a scale of Very Likely to Not At All Likely.

Of the 20 features included in the survey, some would encourage users to pay more than others.

While features such as higher SERP placements and removing competitor ads were far more favored by respondents, this does not mean that these are necessarily in demand. Instead, it shows that, if Google were to introduce paid subscriptions, these features would make more users feel like they had to pay.

The features that are least likely to encourage users to pay for Google My Business are all around automation – including automatic responses to frequently asked questions, customer requests for quotes, and to reviews.

If all of the suggested features were introduced, how much would you pay per month for access to Google My Business? 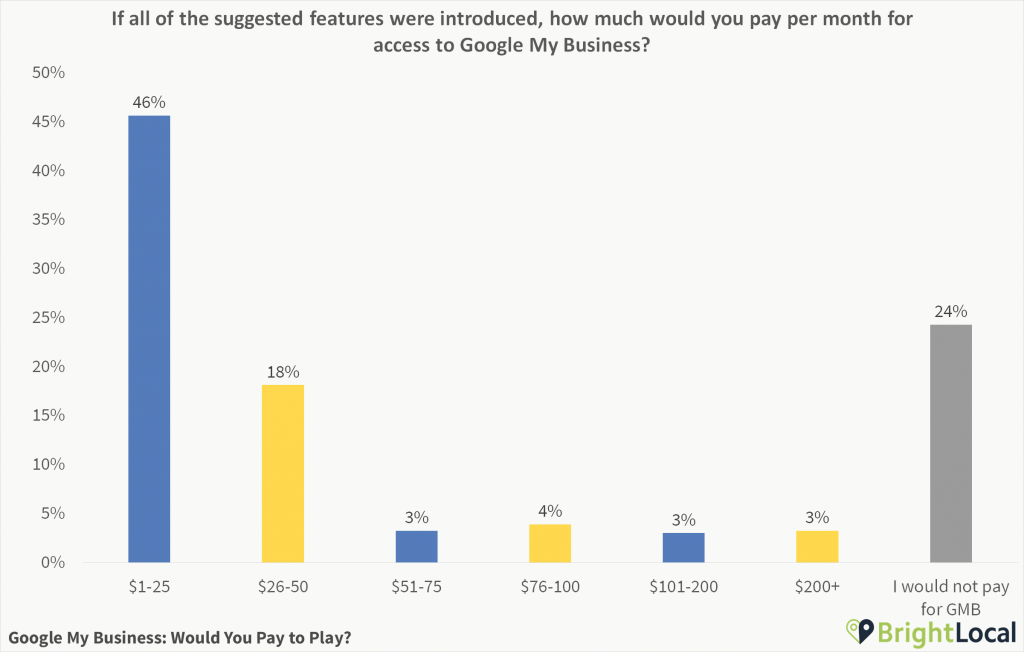 In Google’s survey, respondents were asked which of a series of packages they would prefer, and how much they’d be willing to pay for their top pick. Packages were costed at $25, $30, $50, or $60. With Google My Business providing such a valuable service for local businesses, we offered a broader range of pricing options to see how much our respondents would be willing to pay each money.

Nearly half of respondents said they would pay between $1 and $25 for monthly Google My Business access, with a further 18% paying up to $50.

While 13% would be willing to pay more than $50, any substantial costs could deter many local businesses, brands, and marketers from continuing to use GMB.

It’s worth noting that even with lots of new and useful features added, almost a quarter of respondents would not pay for Google My Business at all, which could say a lot about the perceived value of a product that almost everyone in the local search industry agrees is a must-have.

Do you currently pay Google for any advertising services? 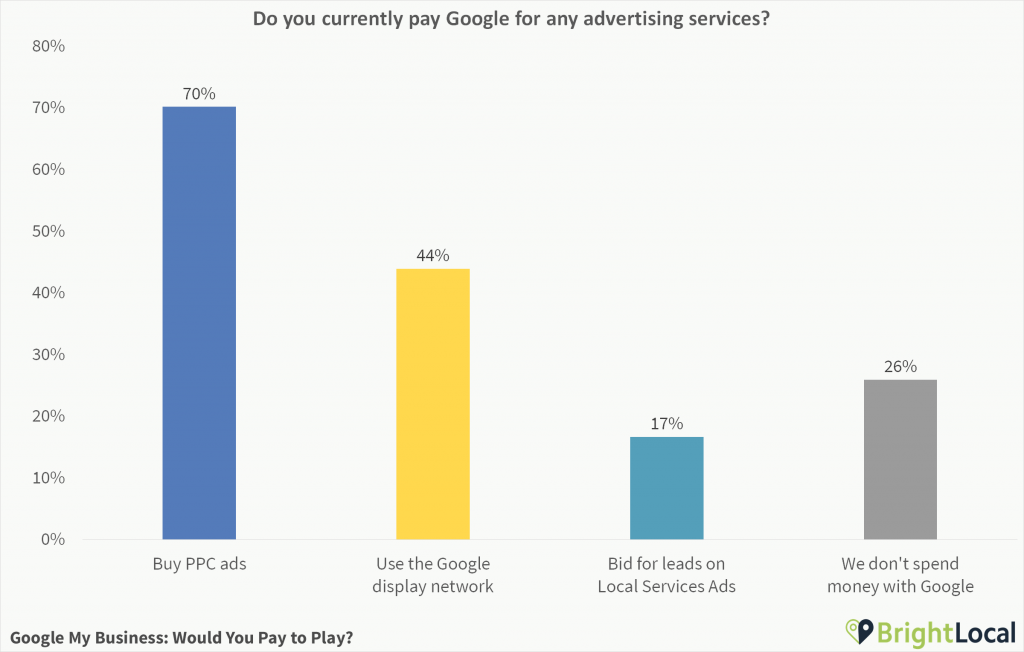 With so many marketers already paying Google for at least one service, perhaps it’s no wonder that there is a limited appetite to pay for more.

If Google My Business added a subscription, would this impact your local marketing budget? 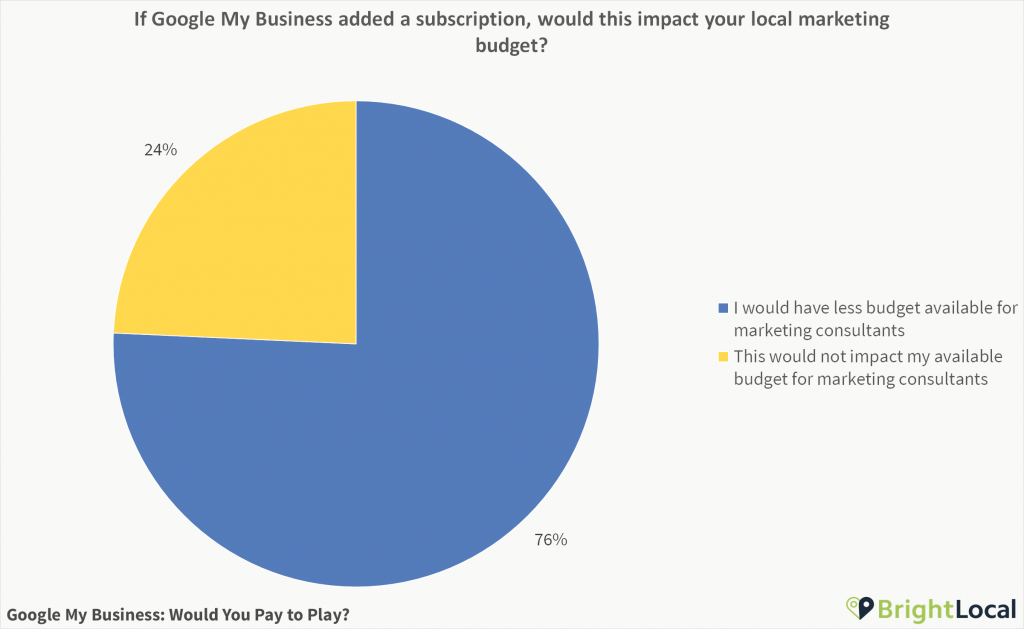 Results are based on respondents from local businesses and brands, removing those who said this wasn’t applicable.

Worryingly for local marketers, the vast majority of respondents from local businesses, franchises, and brands told us that a pay-to-play Google My Business model would leave them with less budget available for using marketing consultants.

While this seems ominous for marketing agencies, as Sterling Sky’s Colan Nielsen reflected on Twitter, local businesses will still need the expertise offered by marketing consultants to maximize their online presence.

The best SEOs get paid for their ability to think and their expertise. Implementation is second to that. Having clients that value your knowledge and expertise over pulling levers is what will keep you employed regardless of what Google does.

Do you think paid-for Google My Business features represent a positive or negative development for marketing agencies? 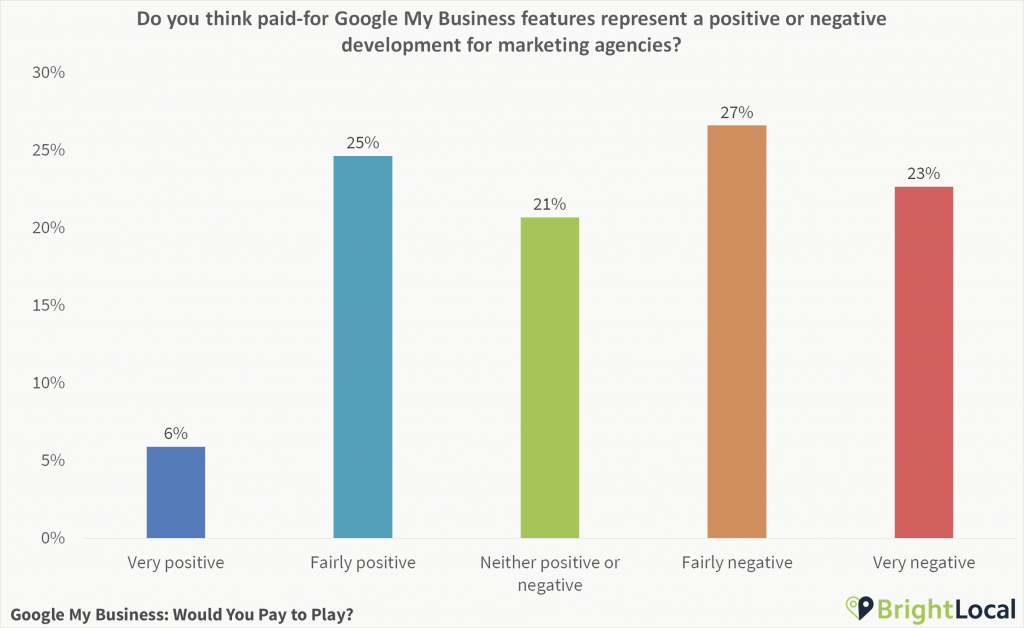 This question was answered by marketing agencies and freelancers only.

Marketing consultants seem divided over the effects of a pay-to-play Google My Business service.

The general consensus does seem to be that there could be both positive and negative consequences if GMB were to become paid, but of course, it’s very hard to tell at this stage.

While many local experts are willing to place bets on Google listings not becoming paid-for any time soon, marketers may need to consider how a subscription cost could affect their business models, if the unlikely were to happen.

Do you think paid-for Google My Business features represent a positive or negative development for local businesses? 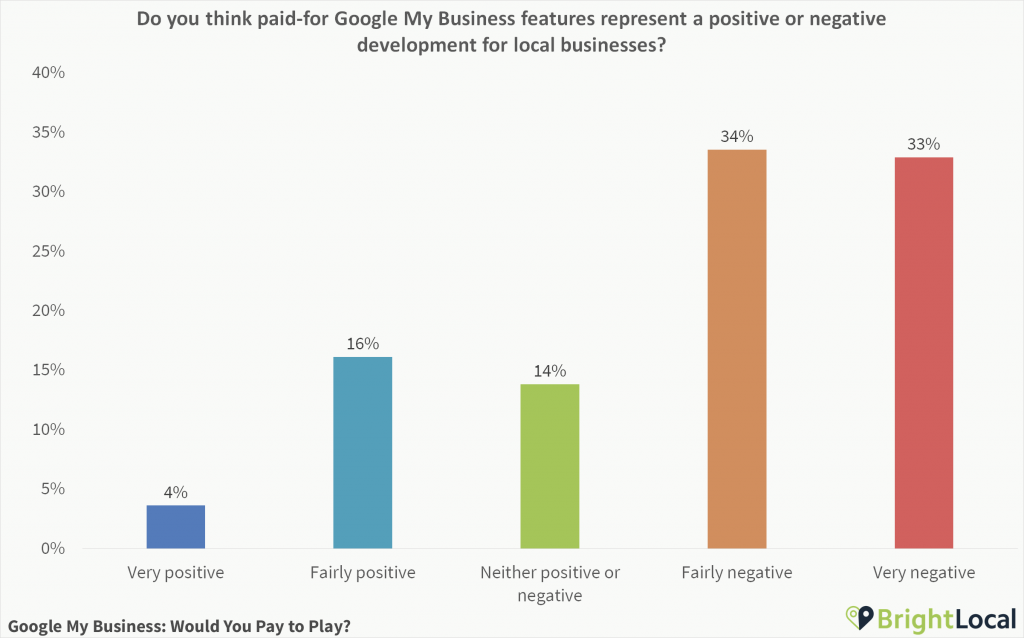 This question was answered by all respondents.

Google My Business has become an invaluable tool for local businesses to get in front of their customers – and a change to a paid service could damage smaller businesses’ ability to reach their audience.

Of course, like any business, Google needs to make money to survive. But with so many local businesses relying on Google, a paid subscription could compromise the quality of local SERPs – switching away from showing the best result, to showing the result with the biggest marketing budget.

Agree or disagree with the above? Share your views in the comments below!

Google My Business is one of the most useful tools local businesses have in their arsenal. But while it is undoubtedly a must-have tool for businesses wanting to connect with ...

How much would you be willing to pay for Google My Business features? That’s effectively what Google asked GMB profile managers in a recent survey, and the response from the ...

Google is the unmistakable boss of the SEO industry, but as we all know, great power brings with it great responsibility. With SEOs having to jump at every new change ...