Google My Business is one of the most useful tools local businesses have in their arsenal. But while it is undoubtedly a must-have tool for businesses wanting to connect with customers, it’s not without its challenges.

Following our recent poll exploring which fixes our users want from Google, we wanted to drill down into the specific Google My Business issues that are causing the most frustration.

We asked our user base of SEO professionals and local/multi-location businesses to tell us which GMB problems they want to be fixed, as well as which of these they think should be tackled first.

The results below are based on the views of 310 BrightLocal users — thanks to everyone who shared their experiences with us. And, thank you so much to Sterling Sky’s Joy Hawkins and Steady Demand’s Ben Fisher for their expert guidance on the issues facing GMB users.

Which Google My Business issues would you like to see fixed? 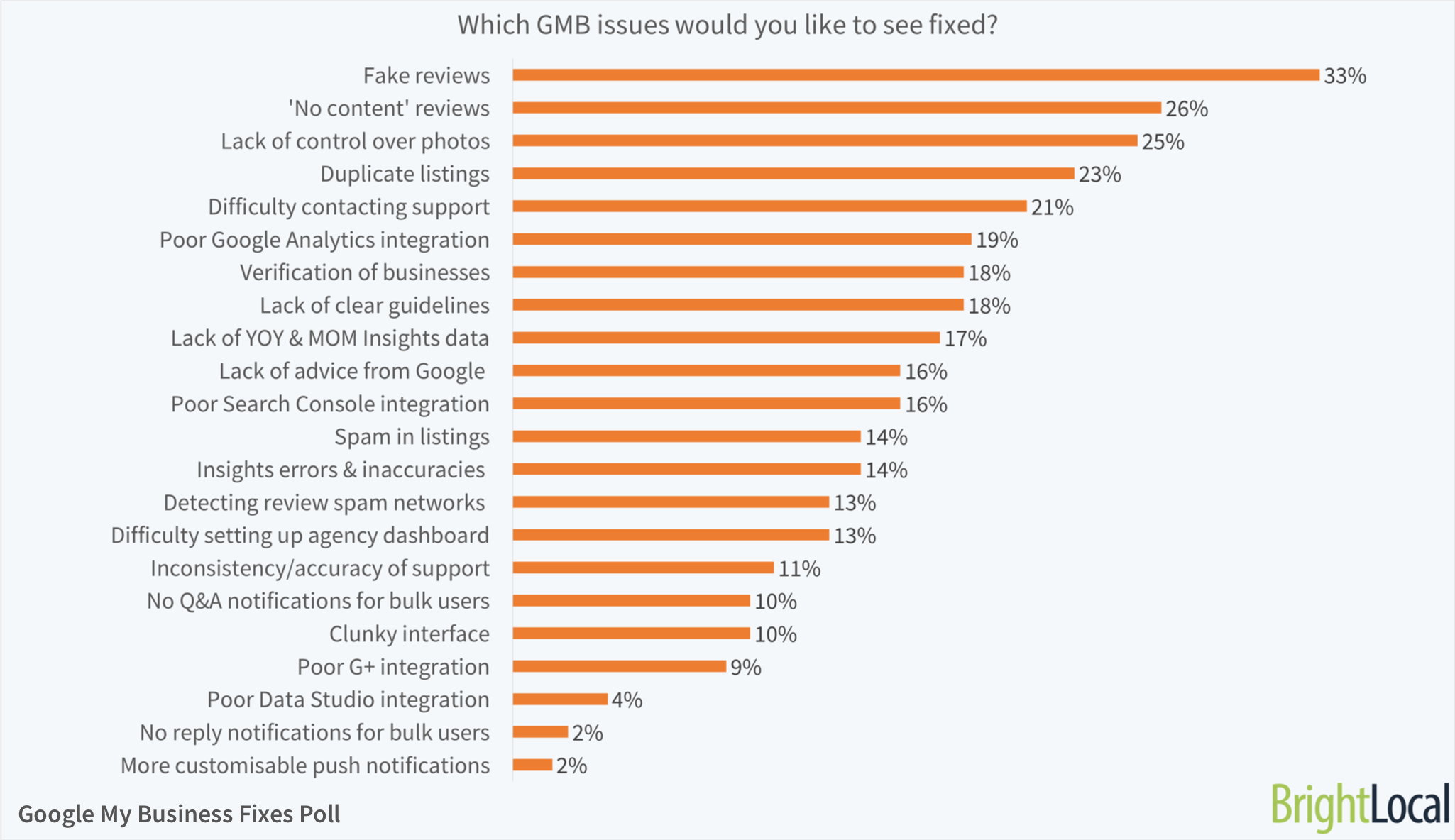 We asked respondents to share all of the issues that they personally want to be sorted.

The most prominent problems are reviews-related, with users wanting fake and contextless reviews to be fixed. A smaller (but significant) proportion are also calling for GMB to focus on detecting review spam networks.

33% of @GoogleMyBiz users want fake reviews to be fixed

A key theme of the results is that GMB users need more control over their listings. Which photos appear, the removal of duplicate and spammy listings, and usability of the new Google My Business Agency Dashboard were all named as major problems.

Communication is also in drastic need of improvement. 21% said they want the difficulty in contacting support sorted, with another 11% saying that responses are often inconsistent or inaccurate. Others want Google to provide more guidelines, and add extra functionality within GMB’s Insights.

Communication with @GoogleMyBiz needs improving. 21% of users want it to be easier to contact support

Every single option of fixes that we put to our users was listed as a problem for some — meaning there are at least 22 changes users need GMB to fix to help local businesses. If you have any further changes you think GMB should focus on, let us know in the comments below.

Which GMB issues should be fixed first? 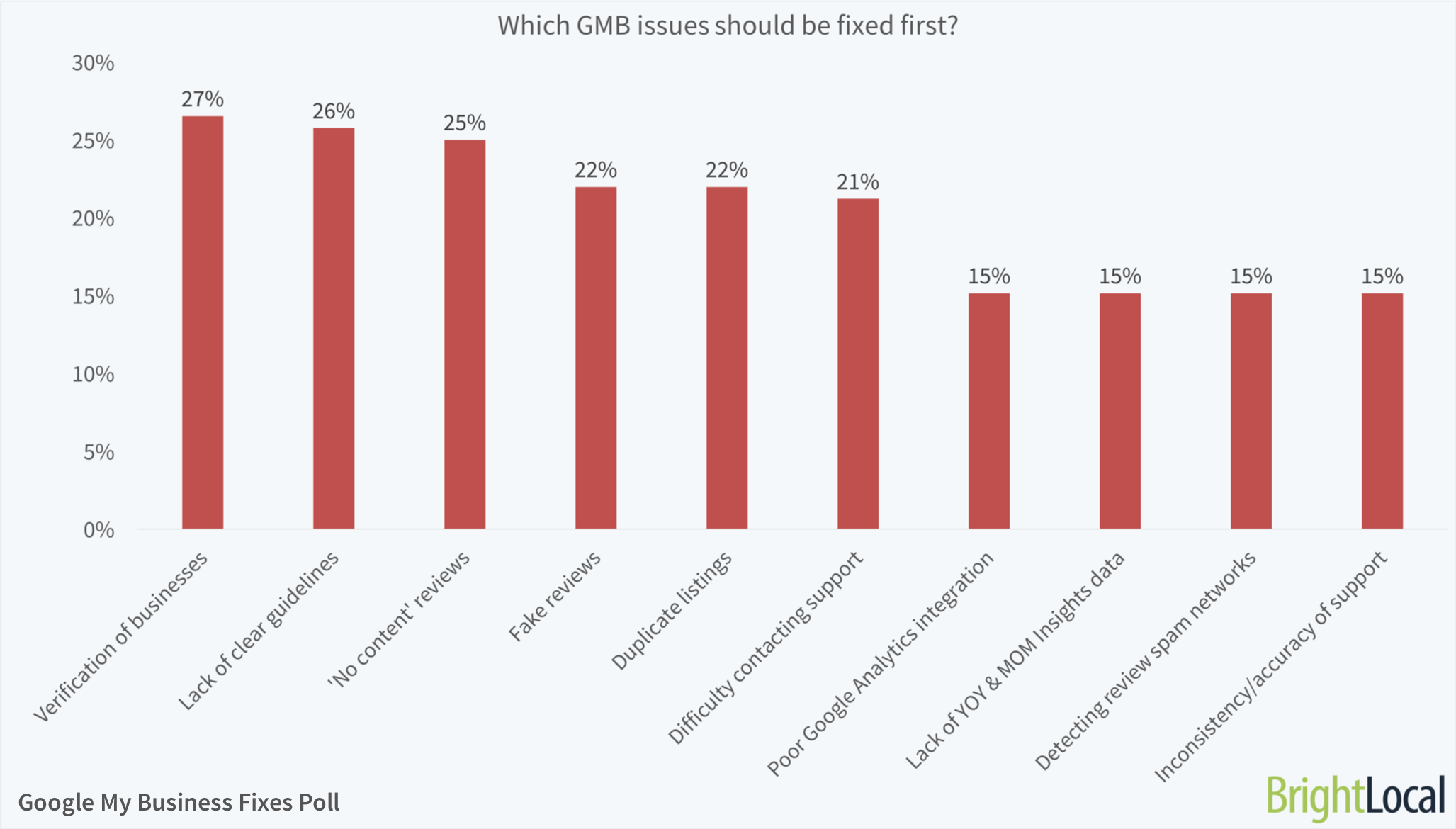 Respondents shared the three issues that they felt needed to be fixed first.

While issues with reviews affect the highest number of people, these aren’t the issues that our users think should be GMB’s priority.

Verification of businesses is the most in-demand, while a lack of clear guidelines comes a very close second. False and no content reviews aren’t far behind.

When it comes to integration, Google Analytics is needed by the highest number of people — perhaps due to advanced users wanting more data in order to improve the visibility of their clients’ businesses.

If you’re one of the people crying out for more information, you may want to try out our reporting platform, where you can monitor all of your local SEO data in one easily customizable dashboard. Sign up for a 14-day free trial here.

Back in 2014, we ran a similar study where users were asked which Google Places updates they wanted.

While GMB is often adding new and improved features, it’s clear that some of the themes from four years ago remain prevalent. Back then, duplicate listings (#1), verification (#2), Google Analytics exports (#8), and live chat support (#14) were all asked for by users.

Since then, we’ve seen plenty of great changes from Google, with features including business descriptions, GMB videos, the directions heatmap, Q&A, posts appearing in this year alone.

But if GMB doesn’t listen to the feedback from its users now, it will fail to reach its potential as the online meeting point for local businesses and their customers.

Your messages to Google My Business

We asked our users to share the messages they’d like to give to the powers that be at Google My Business. GMB, listen up.

“With all the really smart people at Google, could they allocate just one to GMB that truly understands small business?”

“Just who is Google’s user? Business owners, consumers or the spammers?”

“Please remember that businesses use this product! You seem to only consider the user experience, leaving businesses stuck or scrambling to deal with changes.”

“The more difficult it is to manage Google properties, the more it perpetuates the shady perceptions of SEO and Digital Marketing agencies with SMBs. Their budgets are constrained, so processes need to be efficient.”

“It’s frustrating to not be able to update a Google 360 photo taken by the Google van of one of my customer’s DUMPSTERS rather than the business. I have loaded over 20 360 shots and complained numerous times over the last couple of months.”

“With all of the press coverage regarding fake reviews coupled with threads on the GMB forum, when will Google start tackling review fraud?”

“The GMB review system is clearly becoming vitally important for businesses, so it would be appreciated if visible efforts were made to ensure the veracity of this system.”

“Stop allowing fake reviews! There needs to be a way to verify the person is not only real but is an actual customer of the business they’re leaving a review for. Anyone can set up a fake profile to leave a bad review, and Google reps say that’s OK.”

“Make it much clearer to understand how to get local businesses to rank.”

“Please be more consistent and transparent! It seems that the rules are forever changing and only apply to some.”

“Contacting phone support for Google My Business has to be the single most painful thing to do in dealing with Alphabet. If the intention is for someone to exhaust every SINGLE option, including getting a root canal, prior to contacting then mission accomplished.”

“Train staff correctly — I seem to have better knowledge of Google processes than many of the staff I talk to. If you’re going to offer ‘Insights’ let people display them by specific date ranges! Show improvements.”

“The more data the better! That’ll help us understand how users are using GMB and how we can make it better.”

“Making agencies jump through more and more hoops to get verification for business listings for clients doesn’t make the data more accurate — it actually makes it harder to get accurate data for businesses there, because the businesses have to depend on us for that.”

“I would like the verification process to be simple for the business owners. It is always a hassle to set up a certain time with the business to verify codes over the phone to give us agencies access to their account.”

“Agencies need better ways to partner with Google to verify listings. I’ve used the new video verification feature and the experience was absolutely terrible. We jumped through hoops for over 45 minutes with the rep and the verification was still denied.”

What do you want to see next from Google My Business? Let us know in the comments below.

"Google does listen to user feedback, yet we have to keep in mind that they are a machine learning first company and make decisions backed by enormous data sets. For example, while I cannot divulge the percentage, listing name spam may be of lower priority simply because the percentage of stuffed names are so small when compared to other larger issues like spam networks or location spam. Another thing that can complicate acting on feedback is the way the organization is internally structured. Product managers move constantly, and sometimes when this happens a treasure trove of plans could get lost in the translation. Keep submitting feedback (yes they do read it), continue to report problems via Twitter, Facebook and the Advertiser Community (again, this is all tracked).
Ben Fisher , Steady Demand

Rosie Murphy
Rosie managed BrightLocal's delivery of research and survey pieces. She headed up data-driven content such as regular polls, webinars and whitepapers, including the Local Consumer Review Survey.
See all of Rosie's articles (68) Follow Rosie on Twitter

Want to know how to get a suspended Google My Business listing reinstated? Here’s everything you need to know to get your all-important listing back, by GMB Product Expert Ben ...

I’ve been working with Google Gold Product Experts (formerly Google Top Contributors) for a year and a half now, and in this time one particular issue has come up probably ...