Research published this week in BrightLocal’s annual Local Consumer Review Survey report shows that 79% of US consumers believe they’ve read a fake review in the last year, but 84% admit that they can’t always spot one.

“Fake reviews (as in, reviews left by the business itself or its connections, paid-for reviews, or reviews left by ex-employees or competitors that don’t accurately reflect the business experience) have widely been acknowledged as a problem when it comes to maintaining a positive reputation. In particular, it’s been documented that review sites don’t treat fake reviews as a priority, and the complexity of getting them removed has left many business owners scratching their heads.”

In 2017, ‘fake news’ entered the lexical Hall of Fame (or in this case, Shame) when it was named Word of the Year. But a parallel trend has equally been eroding confidence in customer reviews. The difference with fake reviews, however, is that behind them there’s always a very real conspiracy to deceive the audience.

Fake reviewers want to artificially boost or reduce the average star rating in order to help or harm a business’ reputation. The culprits range from disgruntled ex-employees wanting to take a parting shot at their former employers, to competitors leaving negative reviews to harm a business’ brand, to business’ asking their staff (or in some cases paying people) to leave biased, positive reviews.

Fallout from the scourge of fake reviews is well-chronicled and multi-faceted. Not only is any business whose reputation is damaged by an artificially reduced average star rating going to suffer as a result (especially as people expect higher ratings than ever before), but the unchecked proliferation of fake reviews can lead businesses to believe it’s a practice worth pursuing with no negative consequence. 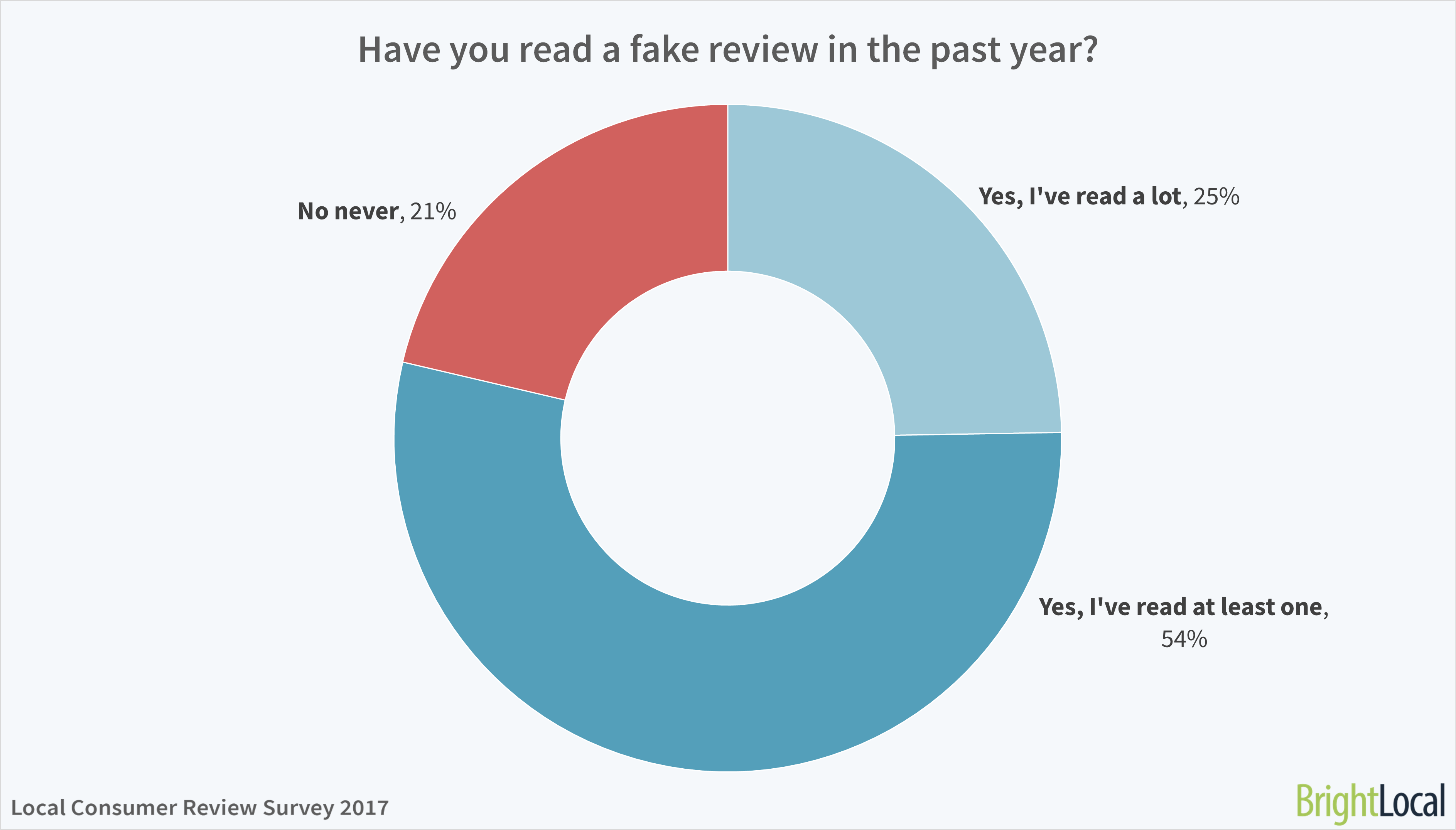 In the survey, which polled over 1,000 US consumers on their behaviors around and feelings toward online reviews such as those left on Google My Business, Yelp and Facebook, a quarter of respondents said that they’d actually read a lot of fake reviews in the last year. This shows that these aren’t one-off, rogue reviews that don’t accurately reflect the business experience; this is a serious problem that could be eroding trust in these review sites, and one that review sites would be wise to prioritize.

Fake reviews present a serious problem that could be eroding trust in review sites.

Of course, the whole point of a fake review is to deceive, and sometimes the wilier fake reviewers succeed in duping their targets. While more than three-quarters of consumers surveyed stated they’d definitely seen a fake review in the last year, when it came to finding out how confident they were in recognising them, 84% said they “can’t always” spot a fake review. 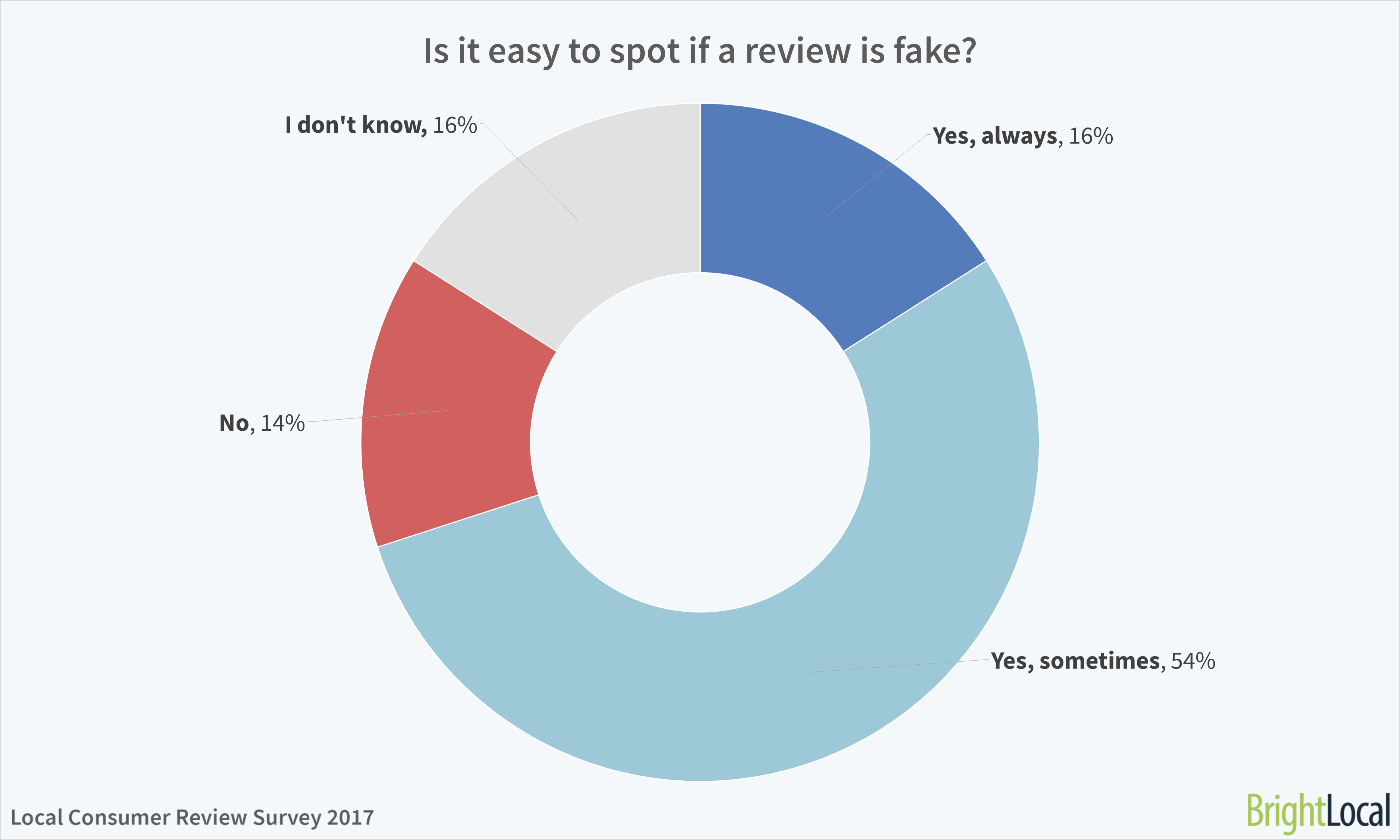 Without this confidence, consumers are naturally going to be finding it difficult to completely trust the average star rating (noted elsewhere in the report as the most important factor in a review profile). Looking at these figures in the context of the rest of the report, which also shows that more consumers trust reviews as much as personal recommendations than ever before in the survey’s history, paints a picture of a consumer base that wants to trust the independent views of others, but whose confidence in reviews is somewhat stifled by a growing pattern of inauthenticity.

These valuable insights are just a few of those available in the Local Consumer Review Survey report, running for the sixth year in a row and completely free, as always. Also covered are review site trustworthiness, actions taken after reading reviews, and the methods by which consumers find and read reviews.

[UPDATE MARCH 17th, 2021: Google has released a free tool specifically for escalating review removal requests and managing and tracking those escalations. It’s not particularly suited to agencies that manage ...

As marketers, we understand how crucial a positive online reputation is, but, we know it can be a little more difficult to sell the need to your clients. That’s why ...