[Update: November 28th, 2019] After Local RankFlux initially tracked higher than usual ranking fluctuations at the beginning of November, new theories have emerged as the local search community tries to make sense of the changes; the local algorithm update has been coined ‘The Bedlam Update’, by Joy Hawkins, while theories are circulating that flux in the local pack could be a result of what sites Google deems relevant. Another theory, dubbed “Swapasaurus GMB” claims that while position #1 remains stable, #2 and #3 are subject to more volatility. Read on for an analysis of the ranking changes during the most volatile period, 1-8 November.

While daily volatility levels usually sit within a score of 2.2-2.8, we’ve seen notable fluctuation across all industries. This suggests the possibility of changes to the local algorithm, with Wednesday seeing a peak of 4.71 – nearly double the usual daily score. 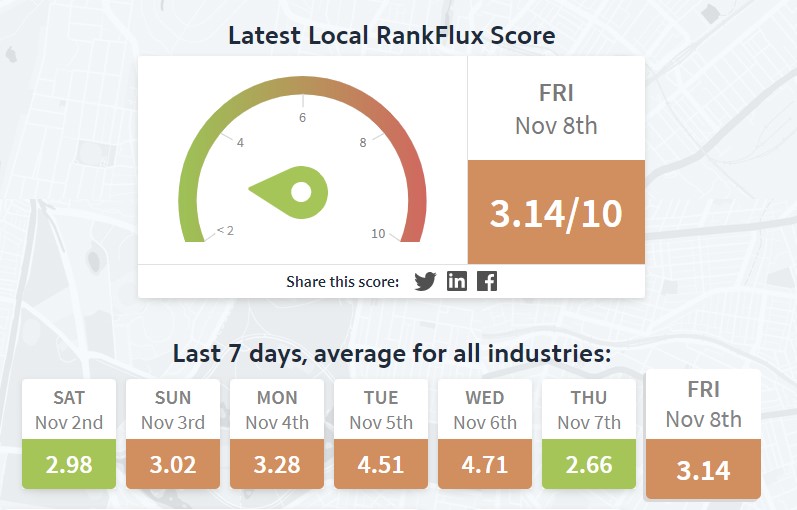 With many marketers reporting high levels of change for the businesses they manage, we wanted to explore our data to see how significant this local ranking flux may be – and see if some ranking positions may be influenced more than others.

Local RankFlux tracks daily ranking movements across 14,000+ keywords to measure volatility and identify suspected algorithm updates. It compares data to the previous day, and creates a score based on the fluctuations in different ranking groupings. Data is split across 26 different industries, as well as providing an overall daily score.

This week’s volatility appears to have affected most industries equally. Therefore, we focused the below data exploration on how volatile local businesses are across the top 20 local ranking positions.

To find out more on the tool, sign up for alerts, and see volatility in each industry, explore Local RankFlux here. 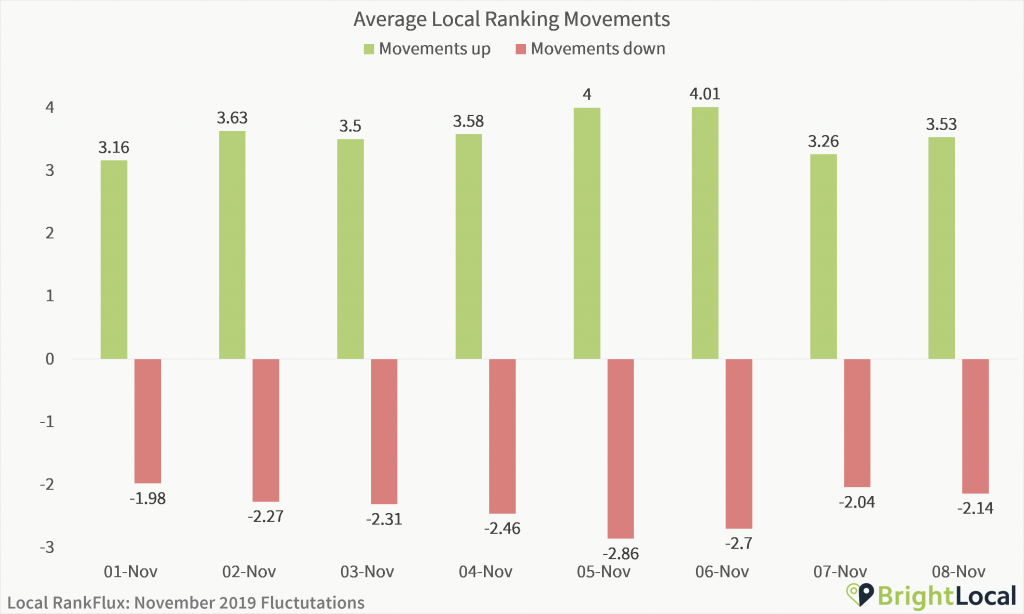 Looking at daily ranking changes it seems that there were increased movements in both directions for those businesses that saw changes.

While, of course, if some businesses go up, others must go down, this data shows that businesses that improved in rankings saw a bigger change than those that decreased.

Starting from 1 November, a seemingly ‘normal’ day for volatility, the average improvement was 3.16, while the average drop was 1.98 places. We’ve taken this day to be a ‘usual’ day to ease comparisons.

On Wednesday, the most volatile day (Local RankFlux Score: 4.71), the average movement up was 4.00 positions, and movement down 2.86. This represents a positive movement increase of 27%, while the negative movement rate increased by 44%.

As explored below, as volatility increased, the proportion of businesses seeing no daily ranking changes dropped. When looking at all businesses, not just those that saw changes, it’s evident that the rate of change differs between ‘normal’ and volatile days. 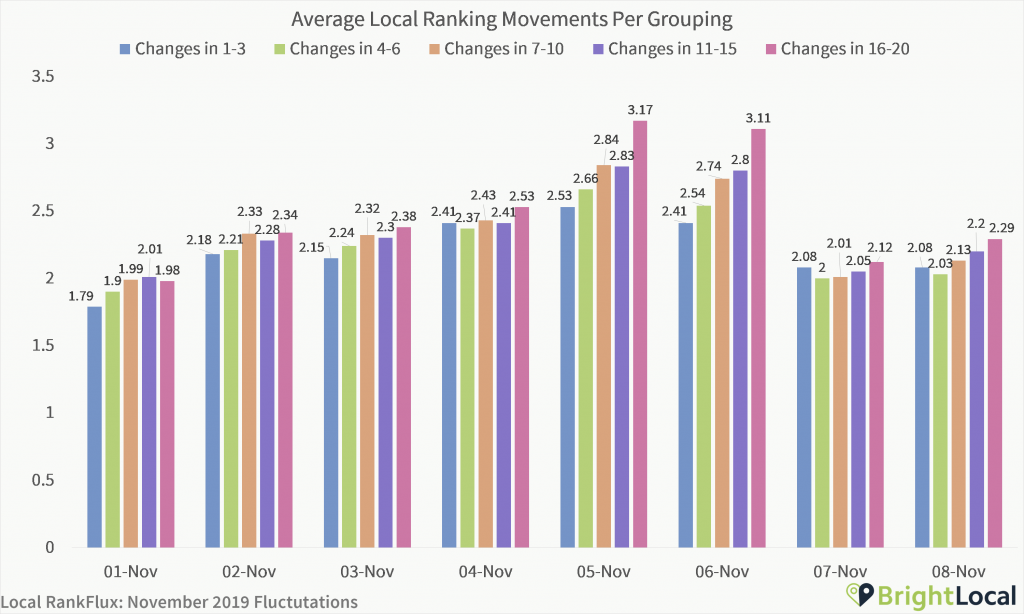 To understand which areas are seeing the most significant fluctuation, we split the ranking movements by grouping.

We found that changes fluxed throughout the week – with every grouping seeing significant changes between normal and the most volatile days.

Comparing 1/11 to 5/11, increases per average ranking movement are up:

However, it’s possible that some businesses saw fluctuations both up and down over the course of the week. For the purposes of this data, we haven’t explored businesses changes over a longer period – so please leave a comment below if your rankings have seen yo-yoing results. 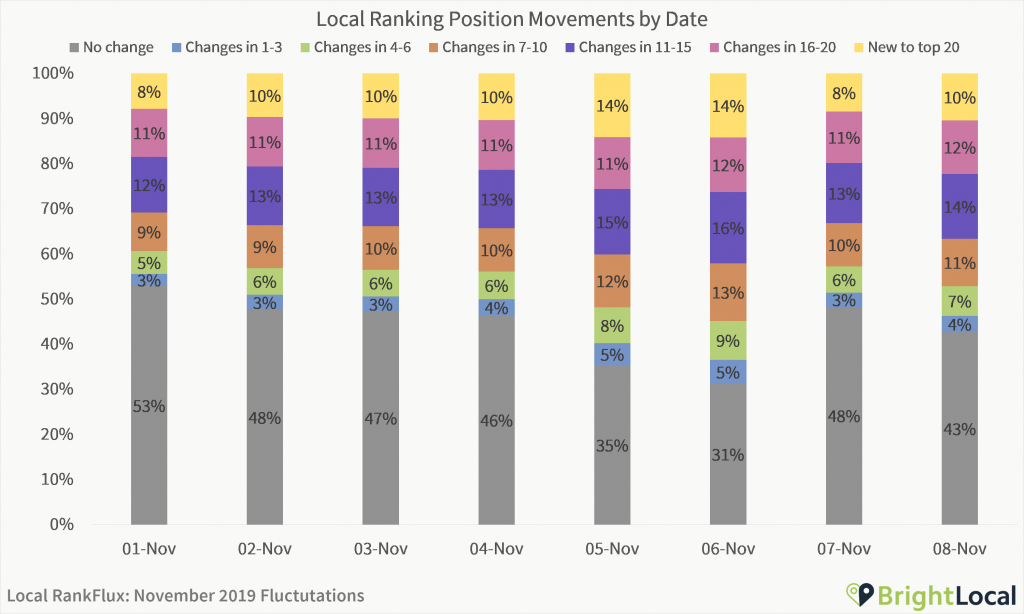 Starting from 1 November, a seemingly ‘normal’ day for volatility, we saw a big drop in rankings that saw no changes at all.

When comparing volatile Wednesday with this ‘usual’ day, there was a significant drop in the proportion of businesses seeing no change at all – equating to a 42% decrease. 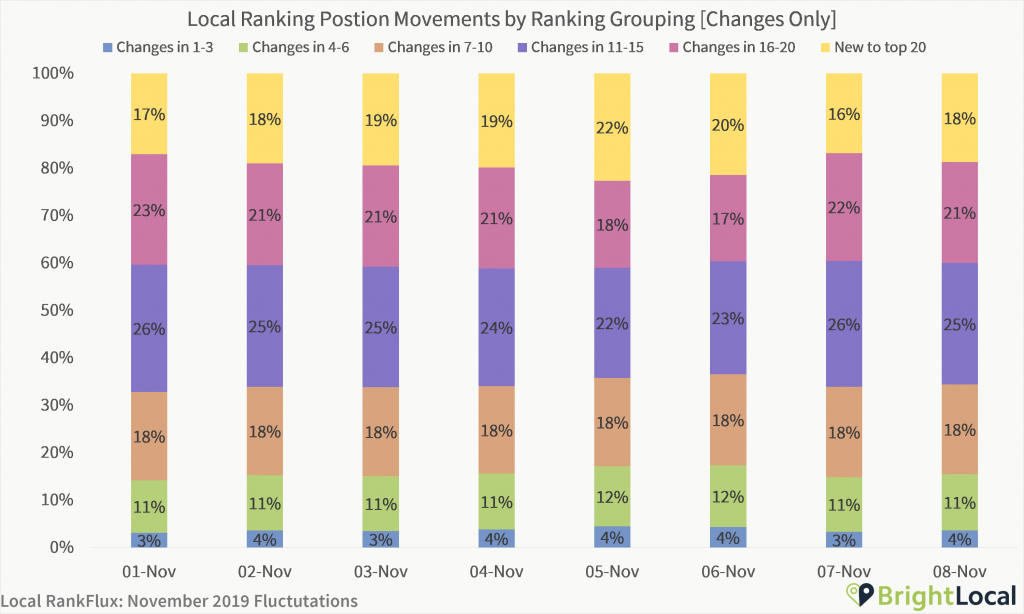 Looking at only the businesses that did see day-to-day change, we see a small (but not insignificant) growth in the proportion of businesses seeing change within the local 3-pack. Businesses in positions 4-6 also saw increased volatility. 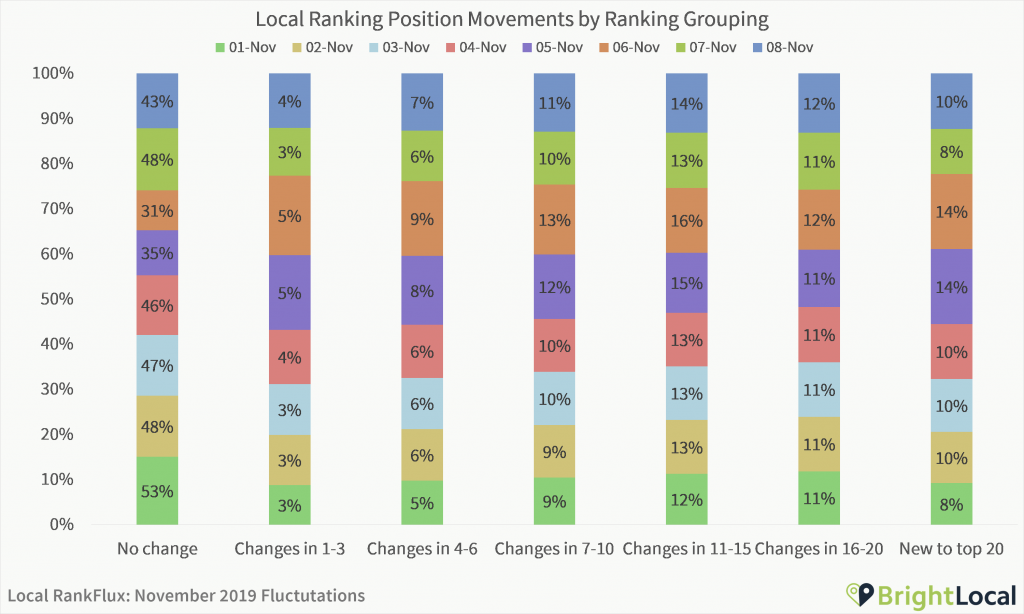 We’ve also cut the above charts by ranking groups to help visualize the days that saw the most notable change. 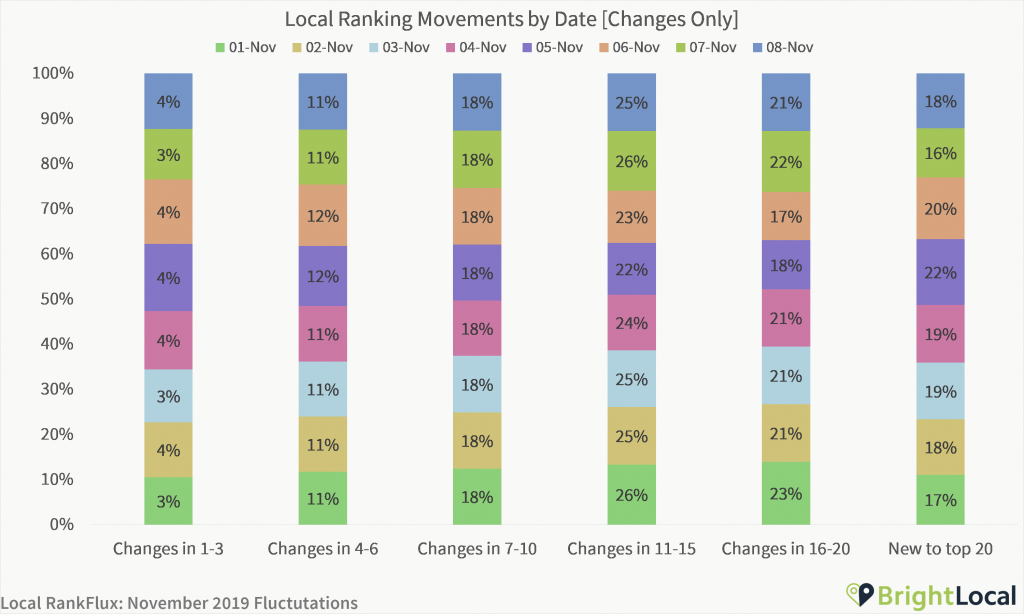 As you can see, new entries saw significant change on the most volatile days. We’ll continue monitoring Local RankFlux data to track changes as volatility continues.

At the time of ranking, there has been no official confirmation from Google of a local update, but the ripples are being felt. On Thursday, Barry Schwartz reported on the volatility, sharing Twitter and the Local Search Forum discussions on this possible change. It has also been noted over at r/bigseo, and now has a dedicated thread for observations at Local Search Forum.

One marketer got in touch on Facebook to share his experiences with the volatility. He believes that it could be an experiment “gone wrong” that has led to some supposedly spammy listings taking the place of established businesses. 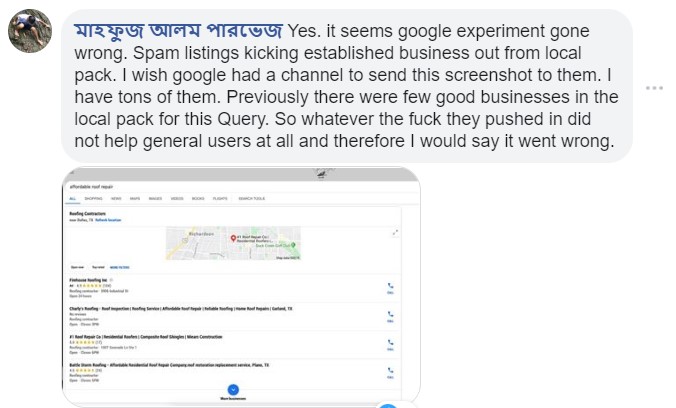 He shared screenshots with us of local rankings changes, with some businesses that had no reviews taking the place of previous high rankers. Of course, one marketer’s experience does not create enough proof to form a theory – so please do let us know your experiences in the comments below. 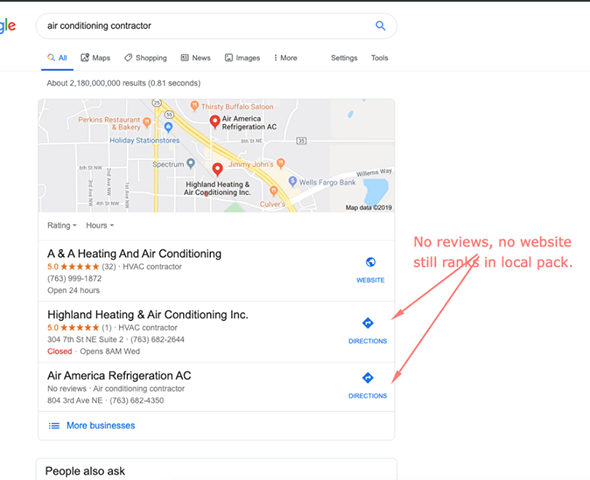 This idea of a ‘mistake’ has also been suggested by Joy Hawkins.

Over the weekend (9-10 November), Local RankFlux continued to be volatile reaching 4.65.

Another big day for local volatility. Are you seeing further changes to your rankings, or are businesses returning to their pre-flux positions?

With the local SEO industry discussing the possibility of this flux being related to an error, we could be seeing higher volatility as businesses return to their previous positions. We’d certainly hope that Google wouldn’t choose to make a change that seemed to benefit spammy businesses.

I still say this is the sky is falling update. Meaning a mistake.

We’ll look forward to hearing the experiences and theories of the local SEO experts over the coming week. If you had any thoughts on this volatility, or experiences of change, let us know in the comments below.

Sign up for Local RankFlux email alerts to receive daily, weekly, or urgent ranking notifications straight to your inbox, and explore our Local Search Rank Checker to stay on top of your own local ranking changes.

Rosie Murphy
Rosie managed BrightLocal's delivery of research and survey pieces. She headed up data-driven content such as regular polls, webinars and whitepapers, including the Local Consumer Review Survey.
See all of Rosie's articles (68) Follow Rosie on Twitter

We’ve all been there: you fire up your ranking-monitoring tool of choice. You see a massive change in rankings. Your heart rate increases. WTF? Was it something you did? Was ...

Google very recently announced the rollout of a significant update to how it handles search queries, called BERT, but how will this affect local search and local businesses? Do you ...

Since November 3, when our local algorithm monitoring tool Local RankFlux alerted subscribers of high volatility in the local pack, the local search community has been abuzz with theories circulating ...