Most of us know which industries are the biggest culprits within the Google spamming circle, but are you aware of the advantages scammers are able to take, thanks to Google’s rules? Contributor Dan Foland shares some of the worst examples, how they have managed to slip through the net, and the impact they have on legitimate local businesses.

I’ve been in the local SEO industry for more than 7 years. When I began my career, most of my clients were physicians and businesses of all sizes. Everyone in the local SEO industry is most likely aware of the spam issues that have plagued Google’s local business platforms since the beginning. However, it wasn’t until I started working in the ultra-competitive legal industry that I realized just how bad the problem is.

Which industries are the biggest contributors to GMB’s spam problem?

In my experience the biggest perpetrators are law firms and local service area businesses (SABs). But it certainly doesn’t end there! I love digging into spam, so leave a comment below if your industry is similarly filled with it.

In my current position at Postali we offer legal marketing services, such as SEO, exclusively to law firms. So it didn’t take me long to see just how bad the spam problem really is.

People are often surprised that one of the most esteemed professions is also one of the dirtiest when it comes to breaking the rules. Not only are these law firms breaking Google’s guidelines, but they’re also breaking ethical guidelines that every attorney must follow. Check out my previous article, Google My Business and Legal Directory Tips for New Law Firms for more information on the ethical guidelines.

The biggest problem isn’t that there is spam, it’s that spam ranks and works so well.

GMB Spam in the Legal Industry

For example, if you’re in Los Angeles and you’ve been injured in a truck accident, it would be reasonable for you to search “truck accident lawyer.” The problem is, you’re likely going to see spam show up first. 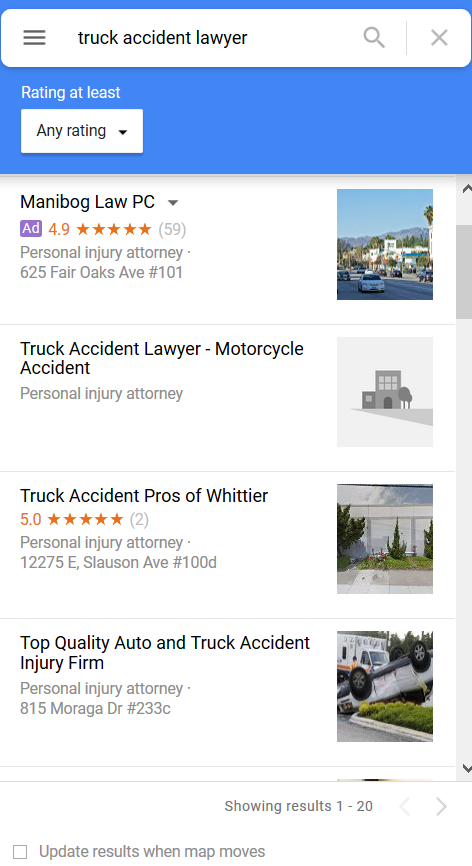 The first three non-paid listings are all complete spam. In fact, 6 of the top 8 results are fake businesses altogether or keyword-stuffed spam. Legitimate law firms in the area are likely losing out on millions of dollars, and unsuspecting victims are being sent to shady lead generation companies, scammers, or lower quality law firms.

As another example, let’s say you’re arrested for DUI in Los Angeles (which may have caused the truck accident above…). It’s likely you would search for “dui lawyer,” “dui,” “dui Los Angeles,” etc.

For example, here are the first five organic results for “dui” in local listings: 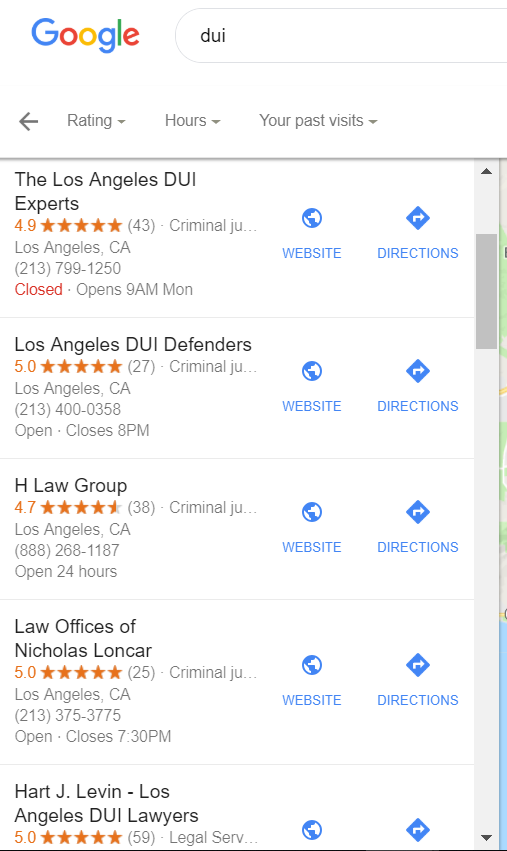 Two of the listings are completely fake, and the other 3 appear to be faking their business location. In fact, 18 of the first 20 results are complete spam, keyword stuffing, or using a fake location. It’s not only people getting arrested for DUIs that have a problem, it’s clear that Google also has a huge spam problem.

The local service industry is just as bad, if not worse, than the legal industry. Service area businesses, such as locksmiths, HVAC technicians, movers, etc. have known the value of showing up first to potential clients since way before the internet was even invented.

Do a search for “locksmith,” “movers,” or “HVAC” in your area. Here in beautiful Columbus, Ohio, 14 of the top 20 listings for “locksmith” contain the keyword “locksmith” and all but one has “lock” in their business title. 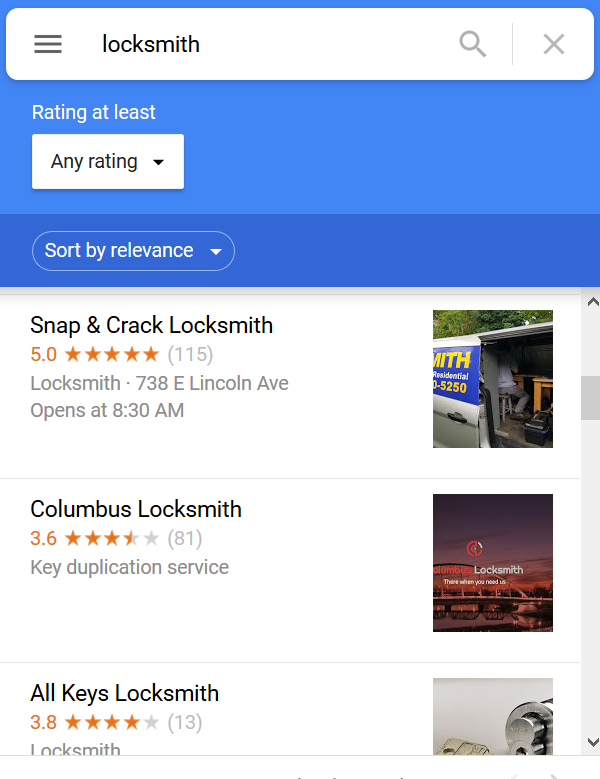 Google doesn’t do a good job of preventing and cleaning up spam, which creates an environment that incites legitimate businesses to use the same tactics.

The below screenshot is one of my favorite examples of Google not detecting or preventing obviously egregious spam. 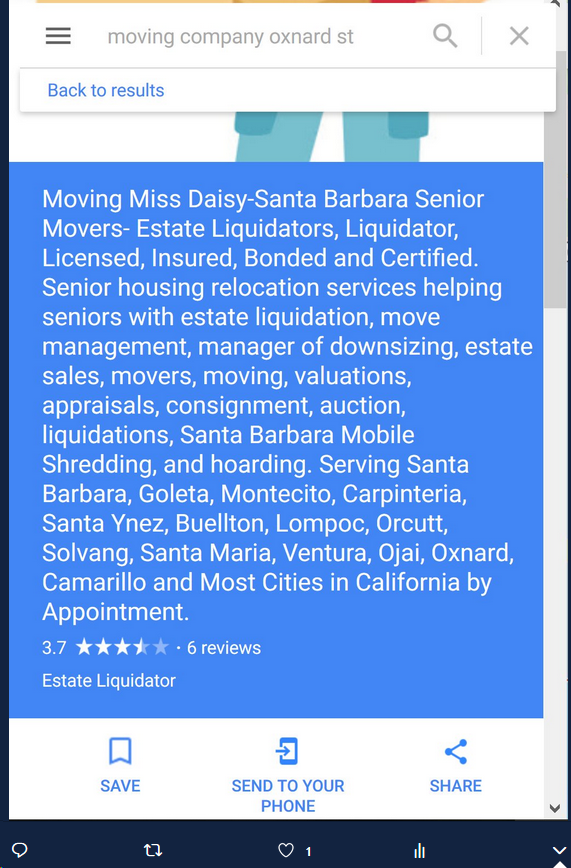 Google actually allowed someone to put that entire word cluster as their business name.

One might think that Google would be doing something about the spam problem on GMB. After all, Google wants to show its users the most relevant results, right? Unfortunately, Google has actually made it harder for us to find and fix spam-related issues.

One of the easiest ways to detect spam is by looking at the address of a business. Since many spam listings aren’t actual businesses, they have to find a place that allows them to use their address for verification. When Googling the supposed business address, it’s usually easy to tell if the business is actually at the location they claim.

Now, Google allows SABs to hide their addresses from public view. Thus, they’ve removed one of the best ways to spot fake listings.

Like many websites that allow reviews, (e.g. Amazon) Google also has a fake review problem. It’s extremely hard to get fake reviews removed unless there is clear evidence the review violates their guidelines.

The best way to spot fake reviews was often to look at the user’s review history, as you could browse it for detectable patterns.

Now, Google has given users the ability to hide their review profile from the public. This makes proving reviews are fake exponentially harder.

As a Google Product Expert, I’ve spent countless hours sifting through and responding to user reports of spam and other policy violations on the Advertiser Community message board. Users were able to interact with Google Product Experts (formerly known as Top Contributors) to get help and feedback when their competitors were spamming the market.

However, Google recently closed the Spam and Policy message board, making it harder for users to get answers and help for spam and policy-related issues. Instead, we have to point users to Google’s Business Redressal tool, where there is no communication from Google on when, or if, action has been taken.

Why is Google making it harder to find and report violations?

I’ll acknowledge that I see the reasoning behind allowing SABs to hide their addresses. Many of these businesses are run out of homes, and they often don’t want their home addresses visible to the public. However, I wish Google would have simultaneously found a better way to find and deal with fake business locations.

I can’t say the same for allowing users to hide their review history. Why remove the ability to look at a user’s review history? Privacy? I doubt it. Google doesn’t require users to use their real names like Facebook does when creating an account, so privacy is already applicable.

Google is allowing technically anonymous users to say just about anything they want about a business without giving other users or business owners a way to see or prove it’s fake, other than the context of the review. This hurts legitimate businesses and incentivizes shady businesses to break the rules.

Why wouldn’t Google take advantage of such a valuable resource? Product Experts are the best in the world at sifting through and finding spam/policy violations. They spend countless hours volunteering; it seems irresponsible not to use them.

Some, in the SEO community, speculate that these changes are to lessen the public criticism and visibility of such a glaring problem. We may never know the true intentions, and for now only Google knows.

Fortunately, not all is lost. There are still ways to deal with and report spam.

The first way is to use the ‘Suggest an edit’ feature. When you run into a business that isn’t following GMB guidelines you can suggest an edit right on the violating business’s listing. 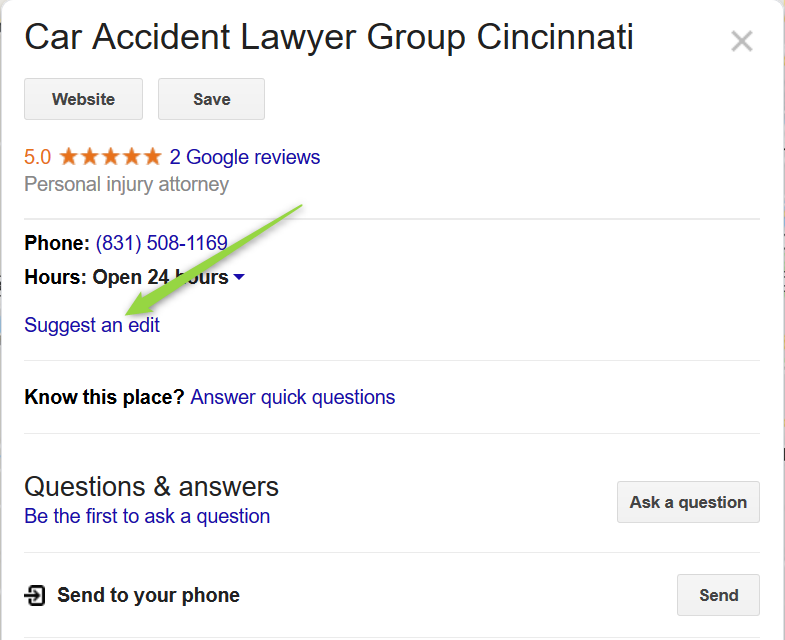 Your edits will usually go into ‘pending’ mode, but it’s possible that your edits are immediately approved or denied. This outlet isn’t fool-proof, and has some issues itself, but it’s a good place to start.

The second, and newest option, is to submit a report via Google’s Business Redressal tool. When you submit a report, a Google employee will manually review it. You won’t be notified when or if any action is taken, but it’s nice to know that actual humans are reviewing your reports.

Check out this resource for more information on the Business Redressal tool and how to best utilize it.

Google needs to utilize the vast resources at its disposal and finally find a solution. Unfortunately, there’s no sign it’s going to be fixed any time soon.

I’m always interested in hearing about experiences or answering questions. Feel free to leave a comment or question below, or shoot me a message on Twitter @DanFoland.

Dan Foland
Dan Foland is the SEO Director at Postali, a marketing agency that helps law firms find new clients. He is also a Google My Business Silver Product Expert as well as a Local Search Expert at the Local Search Forum.
See all of Dan's articles (2) Follow Dan on Twitter

I’ve been working with Google Gold Product Experts (formerly Google Top Contributors) for a year and a half now, and in this time one particular issue has come up probably ...

Spam is taking over Google My Business, damaging rule-abiding local businesses’ chances of appearing in the local pack due to spammers gaming the system. This epidemic of fake listings, keyword-stuffed ...