Each year, we publish our Local Consumer Review Survey to draw up an accurate picture of how consumers perceive businesses through online reviews.

In this year’s iteration, we decided to ask a whole host of questions about fake reviews, particularly assessing how prevalent they are in today’s society and how their presence impacts consumer opinion.

We also looked at a variety of other areas during this survey, such as where consumers source reviews from, what they specifically look for in them, and when they are most likely to leave a review themselves.

But, after obtaining a general overview of this information, we decided to take a deeper dive into the demographic data of our approximate 1,000 US-based survey respondents.

We wanted to understand how consumers think, breaking down the data into demographic subsets and investigate how factors like age, gender and household income influence consumer perception. So, let’s show you what we found.

In today’s day and age, online reviews can be found pretty much everywhere online. And, while Google may often be the go-to for the majority of consumers, there are a ton of other review sites that are just as important—if not more so, depending on the industry consumers are searching for reviews in.

As such, we decided to take a deeper look at how the age of the consumer impacted the type of app or review site that consumers use to monitor reviews for local businesses.

The Impact of Age on Review Site Usage 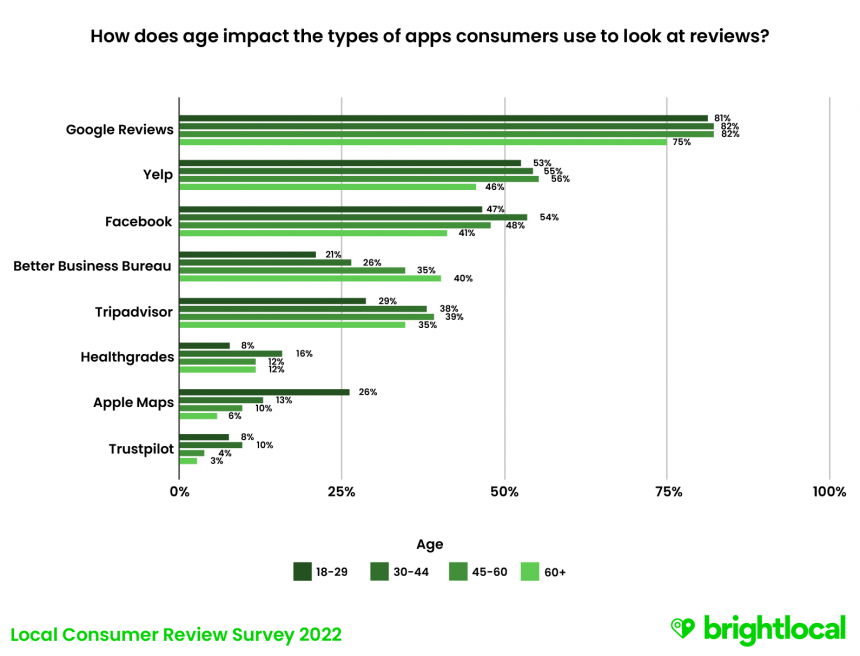 Looking at the data above, Google was found to be by far the most popular review site across all age groups. However, its popularity appeared to dwindle in consumers aged over 60—approximately 7% less than in the younger age groups.

On the flip side, younger consumers—aged between 18 and 29 years old—were found to use Apple Maps significantly more than any other age group (26% of consumers), while Healthgrades and Facebook were shown to be much less popular options.

The data also seems to suggest that the Better Business Bureau is more skewed towards older audiences, with its popularity amongst consumers growing over time—from 21% in the youngest age group to 40% in the oldest.

The Importance of Reviews by Gender

As we reported in this year’s Local Consumer Review Survey, 98% of consumers read online reviews when deciding whether to use a local business’ services or not.

But, of this 98%, we wanted to know how frequently consumers read reviews, and whether there is a difference between the regularity in which men and women turn to online reviews? 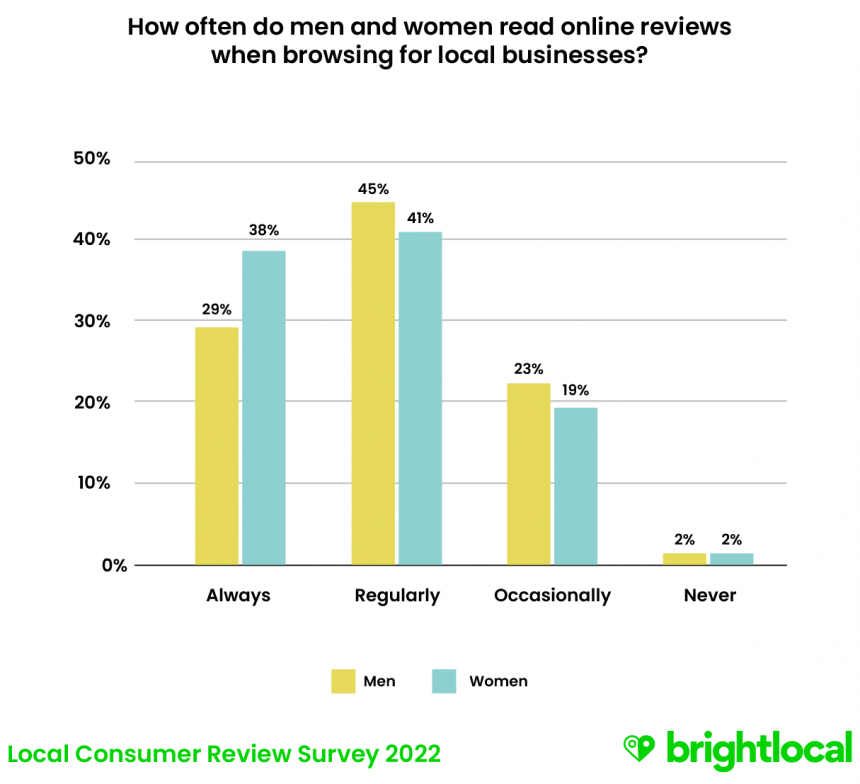 Interestingly, looking at the data above, 79% of women read online reviews either ‘Always’ or ‘Regularly’, compared to 75% of men.

As such, this would imply that men are ever so slightly more trusting when it comes to searching for local businesses, seeing less need to routinely monitor reviews in the same way as women do. But, is this really the case?

As you will likely know already, review sites currently have a major problem with fake reviews.

Whether in the form of a negative review bomb or a competitor simply trying to artificially reduce a business’ average star rating, fake reviews can come in all shapes and sizes. This, in turn, leaves a large proportion of consumers on guard when assessing local businesses—especially in terms of the sites they choose to trust.

The Most Suspicious Review Sites 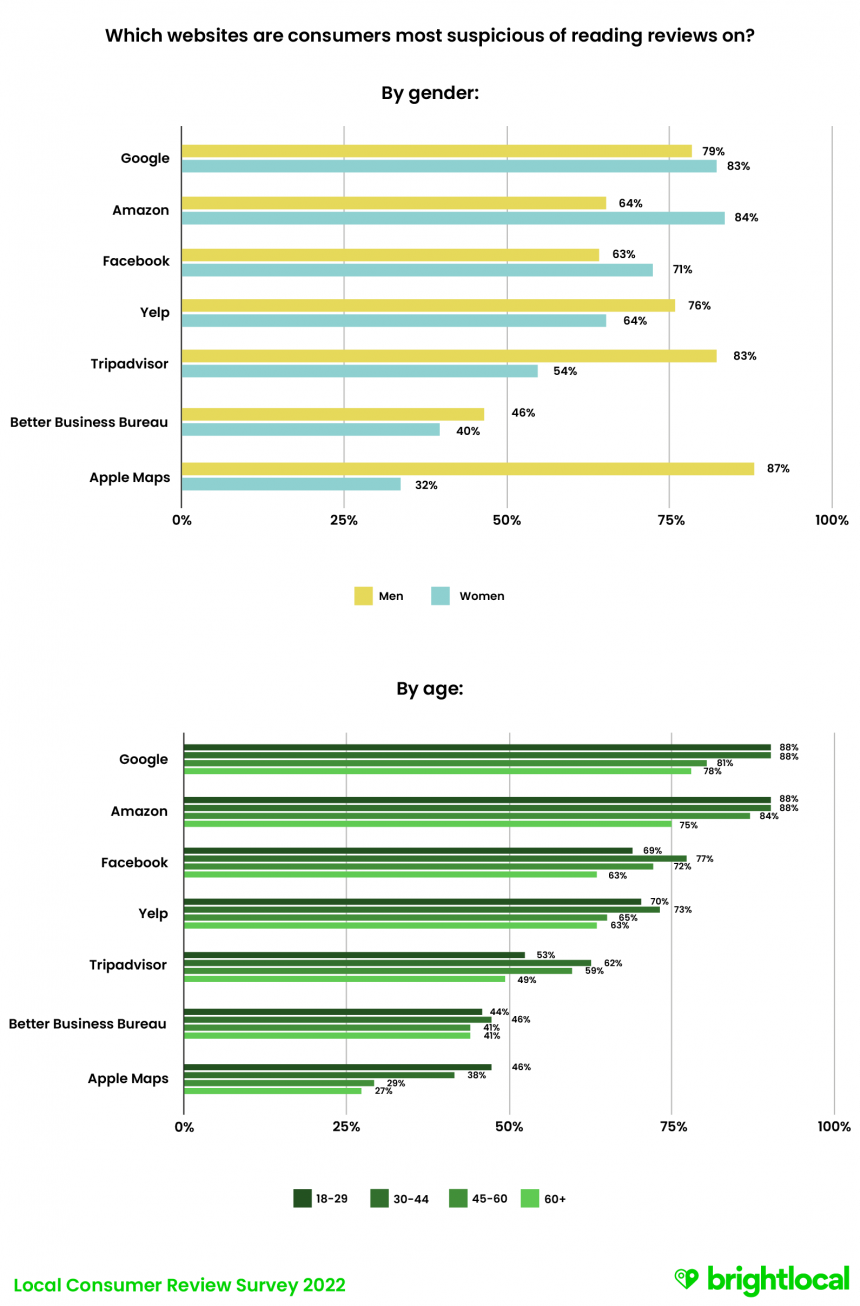 Looking at the key review sites across the web, we can see that men are generally more suspicious of reviews right the way across the board (a 71% combined average across all the sites, compared to 61% of women).

Women are most suspicious of reviews on sites Google (83%) and Facebook (71%), while men tend to mainly distrust the reviews they see on Apple Maps (87%) and TripAdvisor (83%).

There was also an interesting difference of opinion over Amazon reviews; 84% of women were found to be suspicious of trusting this website compared to 64% of men. However, as alluded to in the Local Consumer Review Survey, this could perhaps be down to the influence of review farms, where consumers flood particular product pages with fake, five-star reviews to try and outrank competitors.

Looking at the influence age has on review site suspicion, consumers aged between 18 and 44 years old were generally the least trusting across the board, with a combined average of 88% feeling suspicious of reviews on both Google and Amazon. Meanwhile, consumers aged over 60 years old were the most trusting, perhaps highlighting a good target audience for local marketers to focus on.

Consumers aged between 30 and 44 years old were also particularly suspicious of reviews on Facebook (77%), TripAdvisor (62%) and Apple Maps (46%), whereas trust appears to increase in Yelp amongst consumers as they mature.

The Spread of Fake Reviews

So, now that we know the websites that make consumers suspicious, are these sites also where consumers encounter the most fake reviews? 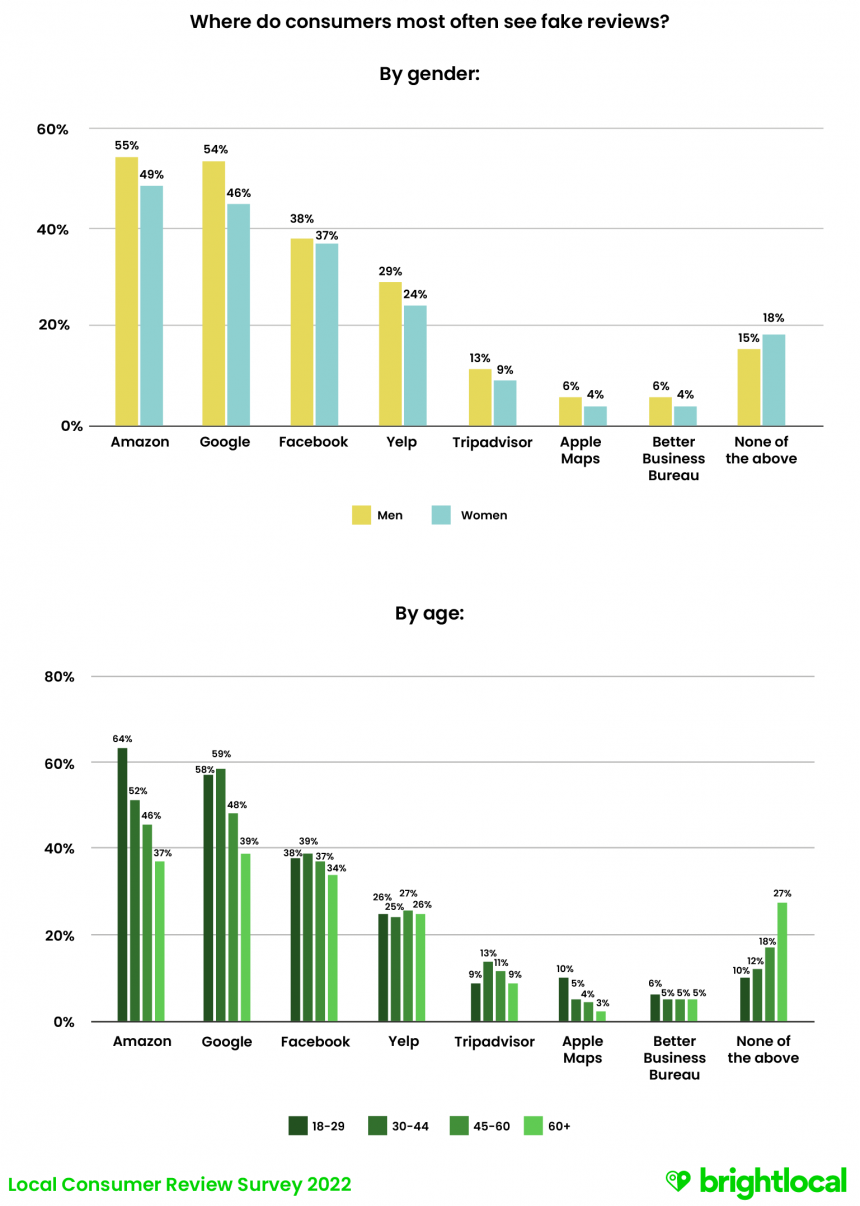 Well, according to the data above, men appear to encounter more fake reviews across the board than women, garnering higher respondent percentages across every review site.

However, when compared to the charts listed in the previous section, this makes for interesting reading.

While this could potentially come down to respondents simply not using these platforms, it’s still worth asking why consumers are so suspicious of particular review sites without necessarily having seen actual evidence of fake reviews themselves.

Does this add fuel to the fire that a lot of consumer behaviour and decision making actually comes down to the public perception of specific sites, rather than the facts? Do consumers buy into the reputations they hear about online and follow the crowd, instead of finding out for themselves? Let us know what you think in the comments below.

This correlates with the data above as well, where older consumers were found to generally be less suspicious of the reviews they see online.

Having looked at the review websites that consumers most commonly use and trust, we wanted to know what some of the factors that could stimulate them to leave a genuine, positive review for a local business themselves were.

When do consumers leave positive reviews? 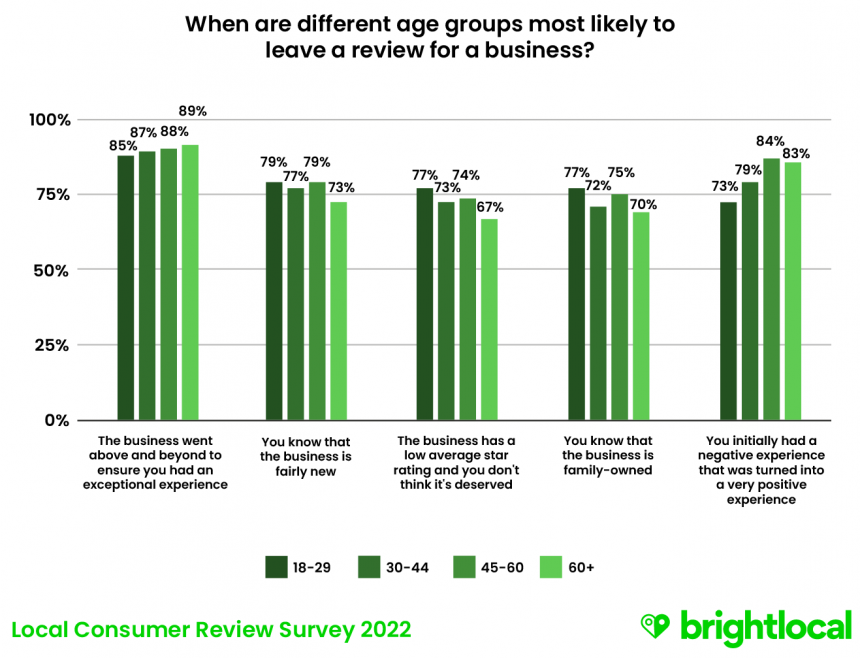 According to our data—and as you would probably expect—consumers across all age groups were most likely to leave a positive review in circumstances where the business went above and beyond to deliver an exceptional experience.

Interestingly, a higher proportion of younger consumers were also shown to be more likely to leave a review when they felt the business’ low average star rating was undeserved (77% of 18—29-year-olds, compared to 67% of consumers over 60).

As such, it could be argued that young people tend to feel more confident in their own opinion than other generations, feeling more prepared to leave reviews in cases where they disagree with the consensus given by other reviewers.

Conversely, consumers aged over 45 years old are the most likely to actively help a business, especially in cases where a local business goes out of its way to turn a negative experience into a positive one.

However, this may come down to this generation simply having more time on their hands than younger consumers, who may be more inclined to leave a negative review—as highlighted in the chart below.

Which types of consumers help or hinder local businesses? 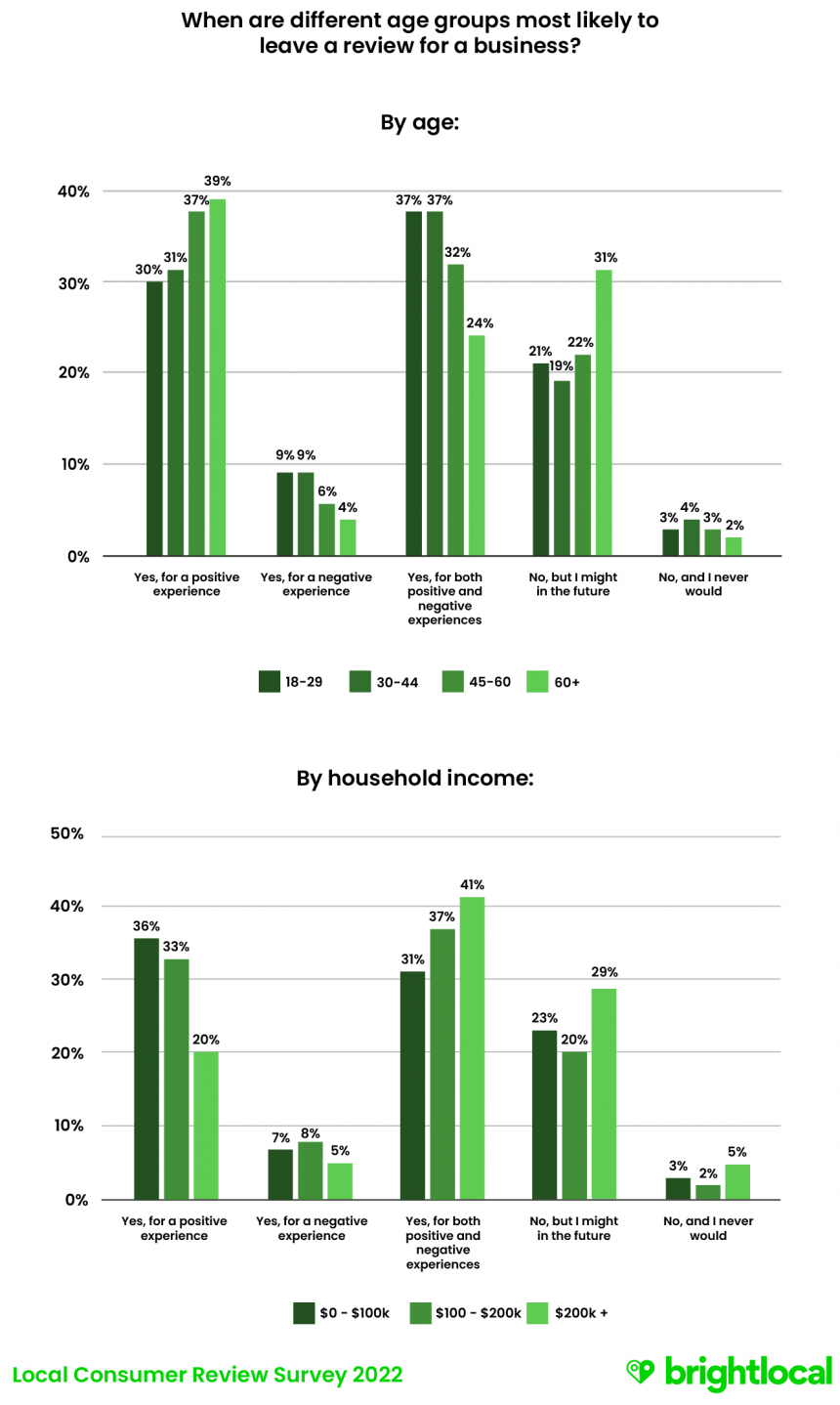 Moreover, approximately 20% of consumers aged between 18 and 60 years old were found to not have left a single review—whether positive or negative—over the past year. As such, it could be said that—despite having a distinct lack of trust in particular review sites and a firm recognition of the wealth of fake reviews published online—a large proportion of consumers appear to be unwilling to stem this tide.

But, why is this the case? And does it have anything to do with the amount of household income consumers earn? Well, looking at the data above, there are a couple of particularly noteworthy trends.

Firstly, consumers earning less than $100k were the most likely to leave a positive review, perhaps due to being able to better appreciate the hard graft that many local businesses often have to put into boosting their authority—especially when only just starting out.

And, secondly, consumers earning more than $200k are the most likely to leave a review for both positive and negative experiences. This is perhaps to be expected though, especially when you consider the types of high-end products and services earners in this category will be sourcing from local businesses.

Generally speaking, the stakes when using a high-end product or service will often be higher, placing a bigger pressure on the experience itself. If, for instance, a more well-off consumer were to receive a service they believed to be sub-par or poor value for money, they would be more likely to speak their mind about it online.

So, there you have it—a deep dive into the demographic data behind consumers and online reviews. We hope you enjoyed it! Be sure to check out the original Local Consumer Review Survey for more information, statistics, takeaways and interesting insights.

Also, please feel free to use any of the charts and data included within this piece of research, crediting BrightLocal and linking back to this URL. Alternatively, send us an email or reach out to us in the comments section below and we’d be happy to answer any follow-up questions or queries you might have.

Patrick Bawn
Patrick was BrightLocal's Research Content Specialist. He was responsible for BrightLocal's research into local SEO trends, pulling in BrightLocal data, surveying the community and drawing on his own data journalism experiences to provide valuable local SEO insights.
See all of Patrick's articles (3)

Online reviews are vital to modern consumers – they rival word of mouth recommendations and help with the decision making process. Generating reviews is an essential activity for any local ...