In December 2021, Google confirmed a significant update to the local search algorithm had recently been rolled out. According to Google, the update—which had already been spotted by SEO experts and nicknamed Vicinity—involved “a rebalancing” of local search ranking factors.

As the search results began to settle, it soon became clear that this update primarily targeted two things:

In the wake of this important update, we decided to take the temperature of the local SEO community to determine the impact so far.

By polling 500 BrightLocal customers, we’ve been able to gather some interesting insights into Vicinity. The customers polled include consultants and freelancers, multi-location businesses, small local businesses, and agencies.

We also reached out to our community through social media for additional opinions on how rankings have been affected by the update.

Read on to discover what we uncovered!

Through the poll data, we’ve observed that consultants and freelancers are evidently the least affected by Vicinity. 67% of people in this group stated they’ve seen no noticeable difference to their client’s local search rankings.

Additionally, only 8% of those in this group have seen rankings greatly impaired following the update.

“Still too early to tell. The tighter circle can help and hurt depending on where you are.” 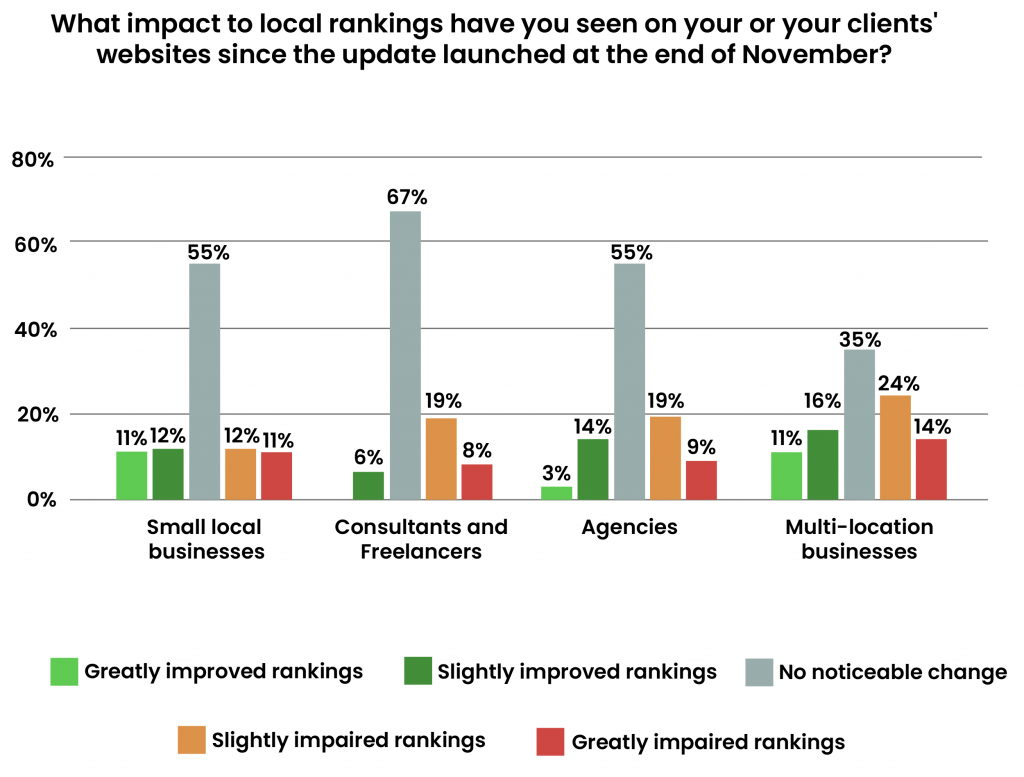 On the other side of the scale, however, multi-location businesses (MLBs) appear to have been hit the hardest.

“From what we’ve seen, the Vicinity update has really narrowed down our ability to rank well further from our location center. I get what Google is trying to do, but it’s impairing what SEOs can do to improve rank over competitors.”

When it comes to small local businesses, the results are balanced on both sides. 33% of people in this group experienced a positive impact, and 33% experienced a negative impact.

“Low competition niches weren’t affected, but high competition sectors like realtors had a negative impact in my opinion.”

The outcome was more varied for agencies working with local business clients. Only 3% of agencies have experienced greatly improved rankings, and only 9% have seen greatly impaired rankings.

“I believe this is Google trying to sell more ads. By limiting the vicinity a company can rank in, they’re forcing SABs to pay. I do think it’s benefited smaller, struggling companies, however. It also seems to have taken care of a lot of the spam issues.”

The Impact for Multi-location Business Owners

With 38% of MLBs reporting negative outcomes, it’s easy to see who’s felt the weight of this significant update.

We already know that when it comes to local rankings, the Google algorithm helps to level the playing field between small businesses and the bigger players. This is primarily because the Local Pack, Local Finder and Google Maps all take data from Google Business Profiles (GBP), and not from a business’ website. Therefore, a well-optimized GBP is more beneficial to local rankings than the authority of a business website.

Through the Vicinity update, it would seem that Google is strengthening the potential for small businesses to dominate over the bigger chains.

How does the local SEO community feel about Vicinity?

46% of the 500 BrightLocal customers polled stated that they’re unsure how they feel about the update, with 34% saying they feel positively, and only 20% feeling negatively:

Given the recency of Vicinity, it’s not surprising that nearly half of these people haven’t quite made up their minds yet.

The fact that such a large number of people don’t yet have strong feelings about the update either way is also likely a result of the change (or lack thereof) in the rankings they’ve seen: 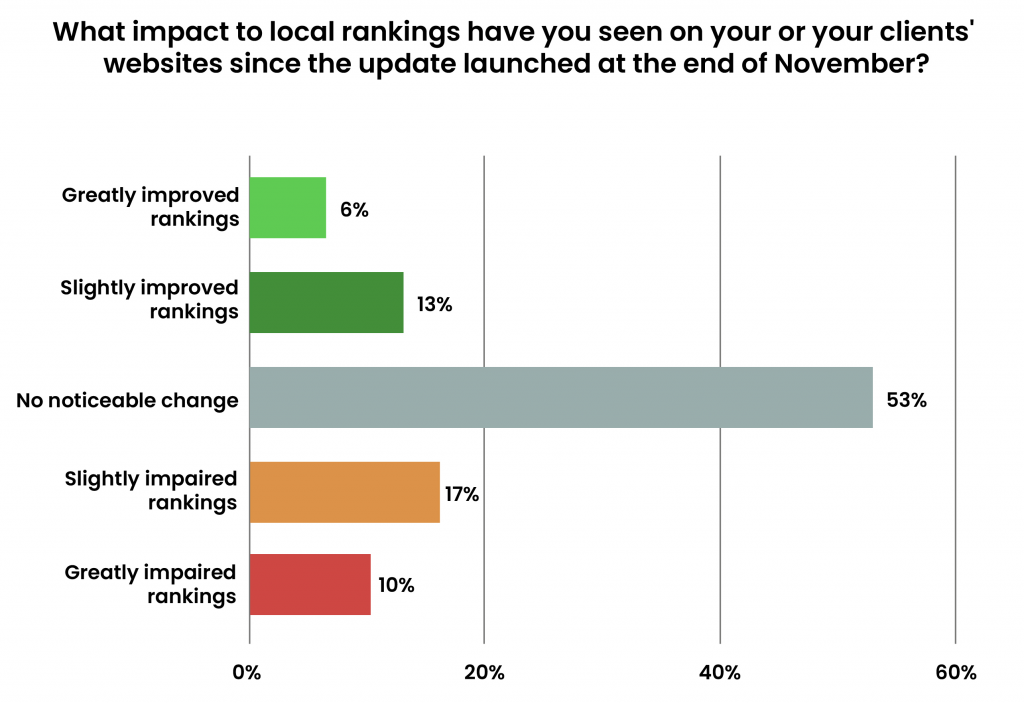 As you can see, there’s no real consensus as to whether the update resulted in higher or lower rankings. This makes sense given that our audience is a reasonable representation of the local SEO community—where some respondents will have seen decreases, other respondents will naturally have risen to take their place, resulting in a kind of equilibrium.

By posting a poll on Twitter and within two Facebook groups for local SEO professionals, we received additional insights into the update. The social media response had slightly more of a negative sentiment than our customer poll did.

How have you or your clients been impacted by the Vicinity algorithm update?

Over on Twitter, 40.8% of respondents shared that they’ve experienced a drop in rankings since Vicinity, with 22.4% ranking higher, and 18.4% having seen no difference:

“We saw a large mix. We definitely had clients in the category of dominating a large geographic area who saw a hit.”

“We saw a huge drop in rankings and impressions on most of our clients’ GBPs but the number of calls/direction requests and website visits is stable.”

“One of my clients ranked all over the city for the top keywords due to my SEO experience, now he shows up nowhere because he lives on the outskirts of the city. Shocking really, leads dropped 90%.”

“Normal rank is restored recently. Dropped 20 plus ranks from one and back to one again in most of the areas in our city.”

“In my area the spam accounts have benefited greatly. We have tanked. I know for many businesses it has had a positive impact and a fairly earned impact. In my area, Google takes companies located in the city center and ranks them #1—even five or six miles out—when there are closer legit companies not ranking. It’s a mess.”

It’s evident that many multi-location businesses have experienced a notable drop in local search visibility since the November update. We’ll be watching the search results over the coming months to determine if this is going to give an ongoing edge to small business owners.

One thing we do know for sure is that it’s a sensible time for those working with small local businesses to up their game. These businesses should be making sure they’re doing all they can to utilize local SEO for the best chance at outranking their competition.

Update: In December 2021, Google updated the local search algorithm to place more prominence than ever before on proximity as a ranking factor. Aptly nicknamed the Vicinity Update, this algorithm ...

Back in 2011, we decided to launch the Local Search Industry Survey—a large-scale analysis of the local marketing landscape. Now into its eleventh year, this survey aims to compile the ...

Adventures in Local Marketing is back for a second season!  Throughout season two, we’re going to be branching out to cover a broad range of topics to truly help you ...