Last month we published the Local SEO Industry Survey; the results of which gave us the latest data & insights about the local search industry – from those that work in it day to day.

In this follow-up post, we’ve taken a closer look at the survey responses from the perspective of the different types of SEOs & Agencies who took part.

The 1,972 respondents identified themselves in one of the following roles/agency types:

Because these roles/agencies can be so different in terms of their size, revenues, amount of clients, services offered etc… it is very useful to drill down into the results for each type of company. This makes it easier for SEOs/Agencies/Web Designers to benchmark themselves against similar businesses and draw more meaningful comparisons.

In the following post we take a look at 6 of key findings of this deep-dive analysis. We also gave away a free Apple Watch in the survey, and you can find out who the winner was here.

What was your company revenue in the last 12 months? 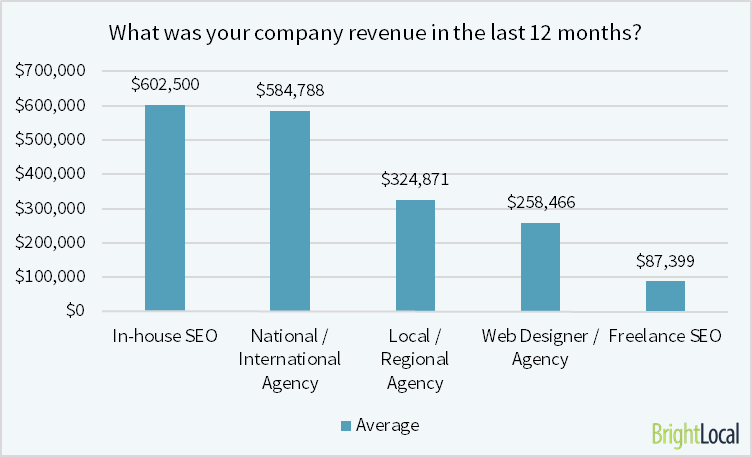 NB: No year on year comparison available for this chart

*Although In-House SEOs come out top we can discount the data in our comparisons. Most of the businesses they work within are not focused on providing marketing/SEO services to other businesses, so they generate their revenue through other business practices. Therefore a comparison of revenue vs. agencies / freelancers isn’t that relevant and useful in our analysis.

If we focus on marketing/ search businesses, we see that larger (National / International) agencies generate the highest revenues – an average of $584k/year. Given that these agencies are bigger in scale than local agencies this isn’t surprising.

What is interesting, is the scale of revenue difference between different agency/SEO types:

Averages however can be misleading, as they can be skewed by outlying results. So to help illustrate this point further, here are the median revenues for each business type:

How many clients do you personally handle? 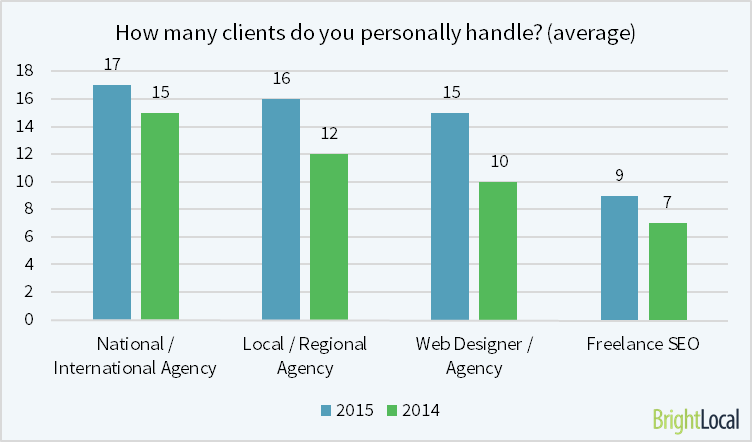 The difference between the amount of clients that an SEO is responsible for at agencies of different sizes is not large – e.g. National / International Agencies agencies (17) vs Local / Regional Agencies (16).

This is despite the much larger gulf in company revenues. Of course, this only reflects on the number of clients to work with, not the amount & complexity of tasks required.

For example, Freelance SEOs look after far less clients on average (9), but you would expect a Freelancer to cover every aspect of the client relationship (including local SEO audits, local search optimization & reporting), as well as managing their ‘company’ as a whole (including new business development, self marketing & often accounting, etc.).

Year on year, Web Designers / Agencies saw the biggest increase in client numbers (up from 10 to 15).

What is your pre-tax personal annual earnings? 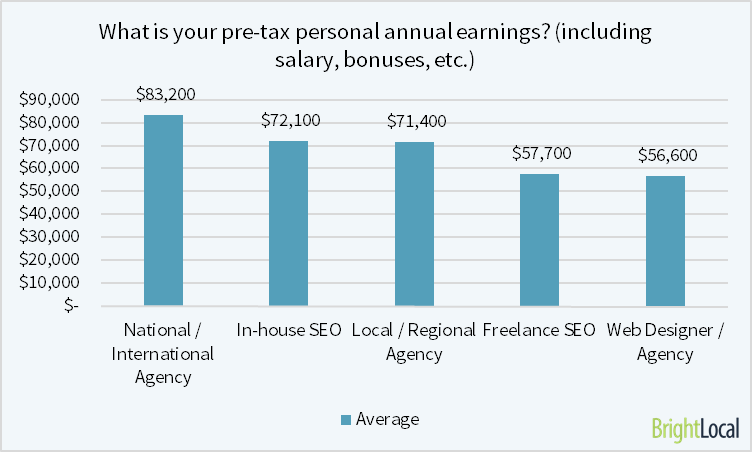 NB: No year on year comparison for this chart

Working for a National / International Agency, the average SEO is expected to work with a greater amount of clients, but they are also rewarded with the highest annual earnings by a considerable distance.

Freelance SEOs, whilst having the freedom of working for themselves, only earn slightly more than Web Designers who participated in the survey.

The median pre-tax annual earnings are listed below:

The In-house SEO’s average income of $72,100 can be slightly misleading as we don’t have data on which industries their companies operate in. However, it’s clear that SEOs don’t have to work for an agency in order to make a good annual income.

How many new leads do you proactively contact each month? 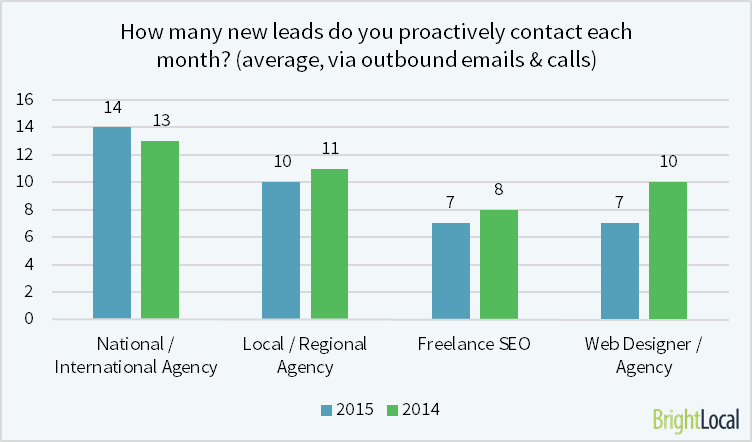 Larger Agencies have more SEOs in their ranks (average of 7) & can therefore take on a greater amount of clients. And with each SEO able to look after 17 clients, this is significant capacity to fill, hence an active, even aggressive, approach to sales.

Year on year, all except the National / International Agencies are contacting less new leads per month, and it’s the Web Designers / Agencies that have the biggest change since 2014 (down from 10 to 7).

What does an average customer pay you each month? 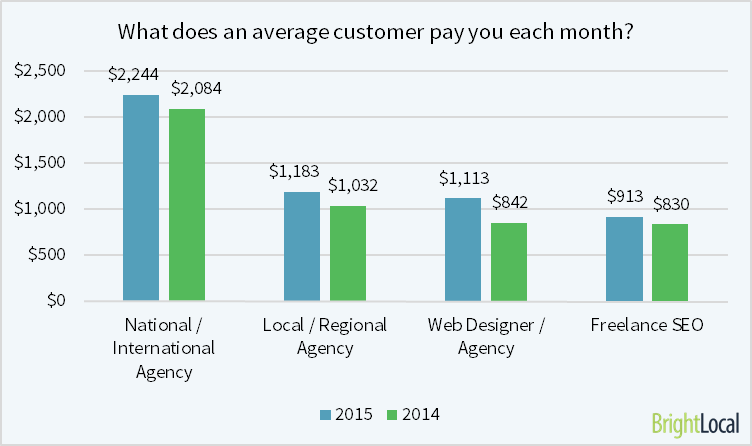 We’ve already seen that larger National / International Agencies handle the most clients & contact the most new leads per month. The above chart shows they can also command the higher fees from customers – almost double that of the next highest (Local / Regional Agencies).

In part this difference is due to the types & scale of clients that larger agencies work with. National retail & Enterprise scale businesses have greater marketing budgets, and so can afford to pay higher fees. Smaller agencies often find it hard to win larger scale clients due to their risk-averse procurement requirements which demand that outsource partners have sufficient scale & security.

Do you expect to grow your business in the next 12 months? 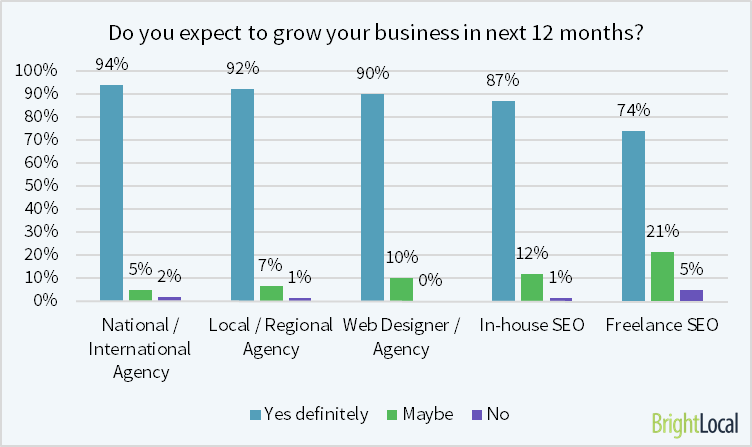 National / International Agencies are the most positive with their outlook for the next 12 months; 94% expect to see growth in 2016.

It is a very similar pattern for all of the Agencies who took part in the survey, and it’s only In-house / Freelance SEOs who fall below the 90% mark for expectancy of growth. 26% of Freelancers either don’t expect growth in the next 12 months, or say ‘maybe’, which points to less security in their situation.

Are you planning to recruit more staff in the next 12 months? 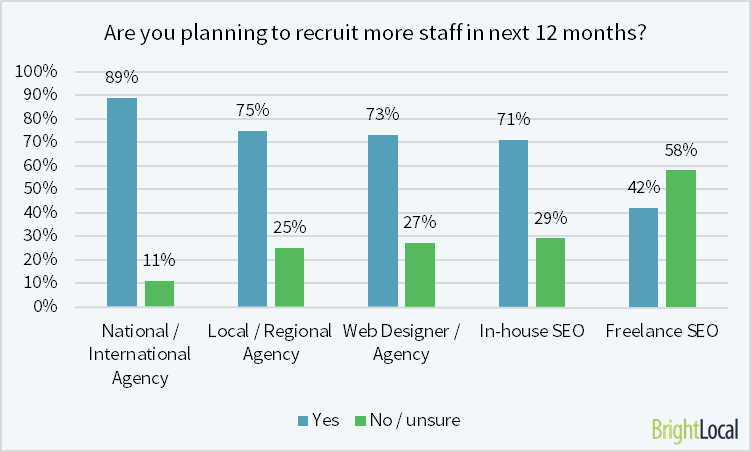 When businesses expect growth, they also expect to hire new staff. National / International Agencies are almost entirely positive about their prospects for the next 12 months, and they are also the most likely to recruit in 2016.

Freelance SEOs are the only group who don’t expect to recruit new staff in the majority. The very nature of being a Freelancer means that they are unlikely to do so of course – unless they take that next step towards becoming a small agency.

We launched the survey with a free prize draw to giveaway an Apple or Android Watch worth up to $500. Following the prize draw last week, we can announce that the winner was Molly Bier, an SEO Specialist at Disney ABC Television Group.