UPDATE: BrightLocal’s Reputation Manager now offers you the ability to reply directly to Facebook Recommendations from within the platform!

Although earlier this year Facebook was testing a new 10-point review scale rather than the traditional five, the platform seems to have now turned on its heels and gone further in the other direction instead.

Currently rolling out to local business pages on Facebook is a Yes/No ‘Recommendations’ system, which is suspected to be completely replacing the current star-rating system. Although the average rating out of 5 shown on the page will remain, it will only take into consideration past reviews and new recommendations. 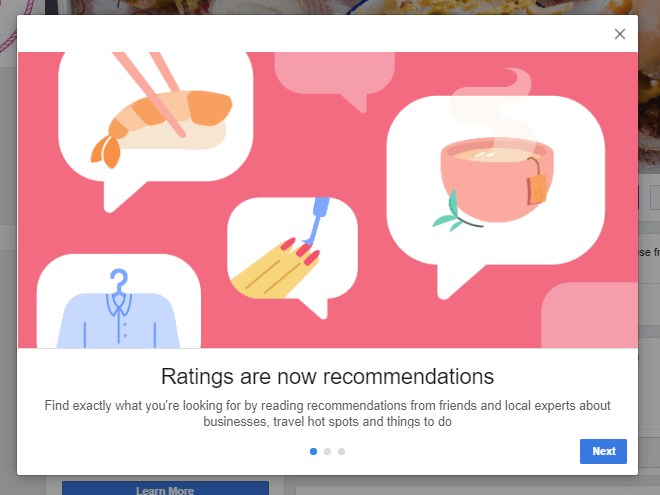 At present, Facebook haven’t opened the recommendations functionality up to API, so once reviews are officially turned off, reputation management software providers across the world will be scrambling to make up for the lost data.

This isn’t the only update coming to local business reviews. As part of the recommendations process, users can leave ‘Rich Endorsements’, which include photos and text. This function, currently exclusive to restaurants and coffee shops but expected to roll out to other industries, makes the recommendation-leaving process easier by suggesting attributes (or ‘tags’) for the user to select, in a move that’s remarkably similar to Google My Business’ subjective and objective attributes. 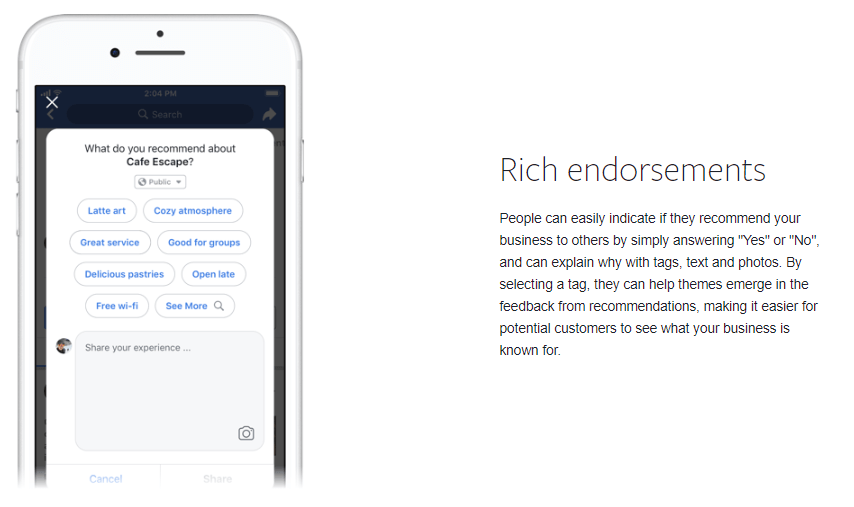 These updates will significantly reshape the way local businesses go about requesting and treating Facebook business reviews. One positive is that the process of requesting a recommendation is simpler: asking customers to ‘leave a recommendation’ is quicker for the business and the user.

However, with the absence of gray area, Facebook recommendations run the risk of only collecting feedback from people with more severe opinions. In the past, even people on the fence about a business could leave a 2-3 star review, but in the brave new world of recommendations, those without strong opinions may refrain from leaving any feedback. The upshot of this is that local business pages could start receiving a lower rate of reviews (but this could also be tempered by rising rates due to the easier process).

Reputation Managers will need to focus more on the content of recommendations as there’s less gray area.

With the range of quantitative responses reduced from five to two, those monitoring and acting on Facebook reviews and recommendations will need to pay more attention to the content of the recommendation, as that’s where you’ll fill the customer experience knowledge gaps left by the removal of neutral star ratings. Expect way more recommendations in the vein of ‘I would recommend this place but…’.

Take note that none of this means that only recommendations will be shown on the page. Users are able to leave a message answering the question ‘How could [Business Name] improve?’ and these will be published to the page if the user chooses to do so (rather than sending private feedback, which is still an option, though a convoluted one involving adjust recommendation privacy).

Build a brilliant business with a
5-star reputation

In stark contrast to the difficult, clunky and dramatically underused process needed to report fake Google reviews, Facebook has announced that, in order to keep recommendations ‘authentic’, users and Facebook page owners will be able to report recommendations for: 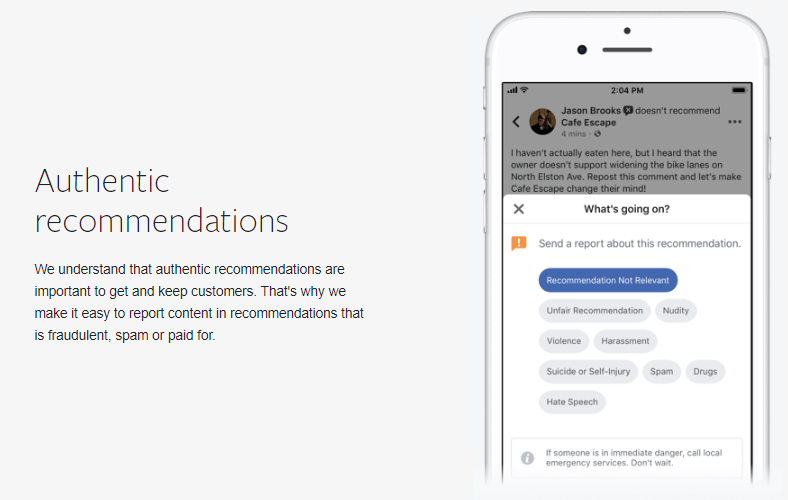 Now, I know what you’re thinking – there’s nothing specific for fake reviews left by review networks, bitter ex-employees and even more bitter rivals, but I think we can take a wide view of ‘unfair’, ‘not relevant’ and ‘harassment’ and use the closest that matches our fake review.

It’s going to be really interesting to see how these updates to Facebook business reviews and recommendations impact overall average star ratings across platforms. Will reputation management tools take a Facebook recommendation as the equivalent of a five-star rating, leading to inflated average star ratings, or will they try to separate these types of customer feedback from the rest of the five-star pool?

We’d love to hear what you think

Is this going to mark the start of a trend across review platforms? Do ‘Yes/No’ reviews help or hinder the reputation management process? Do you recommend Facebook’s new Recommendations system? (Yes/No)

Let us know your experiences with Facebook business reviews and recommendations in the comments below.