We now live in a world where everything gets a review. What used to be the domain of movies, restaurants, music, and art — and flowed from the pens of critics — is now firmly in the grip of the smartphone-wielding consumer.

It’s no secret that today’s consumers love to review everything, from hotels and gyms to doctors and lawyers. So much so that there are hundreds of niche review sites covering every imaginable industry! With the prevalence of consumer reviews and review sites today, it’s little wonder that they can have such a profound effect on local businesses.

Studies show that a high star rating and reviews describing positive experiences are the two most important factors for local consumers when reading reviews. The importance of positive reviews is clear. It’s also easy to see how businesses could be lulled into tactics that could help them to grow only their positive reviews and stamp out low-star reviews.

What is review gating?

Review gating is when a business only encourages happy customers to leave a Google review or only shows positive reviews on its owned assets (such as product pages or other areas of a website).

By first soliciting feedback privately, a business can judge what a consumer thinks without it becoming public knowledge. This means the business can then ask only those individuals inclined to leave a good review to share their feedback online via a review platform. The result is gated reviews.

Review Gating — What Does Google Say?

Google review gating goes against Google Business Profile guidelines and comes with heavy penalties. If you want to build your Google review profile, you must ask everyone for a review, rather than cherry-picking the customers you think might give you the most positive feedback.

The tricky thing with gated reviews is that it isn’t always done overtly, and many businesses could be falling foul of review gating guidelines inadvertently.

HOTEL RECEPTIONIST: “Have you enjoyed your stay with us this weekend?”

HOTEL RECEPTIONIST: “Then we’d really appreciate it if you could leave us a review on Google.”

The use of “then” is key here. This otherwise inoffensive four-letter word is what would get the business into trouble if Google were lurking in the hotel lobby. This is because it sounds like the request for a review is predicated on the customer’s previous answer.

While many businesses will predominantly be focusing on email-driven review generation campaigns, this seemingly innocent example clearly illustrates the core issue with review gating in a way that highlights the margin of error. 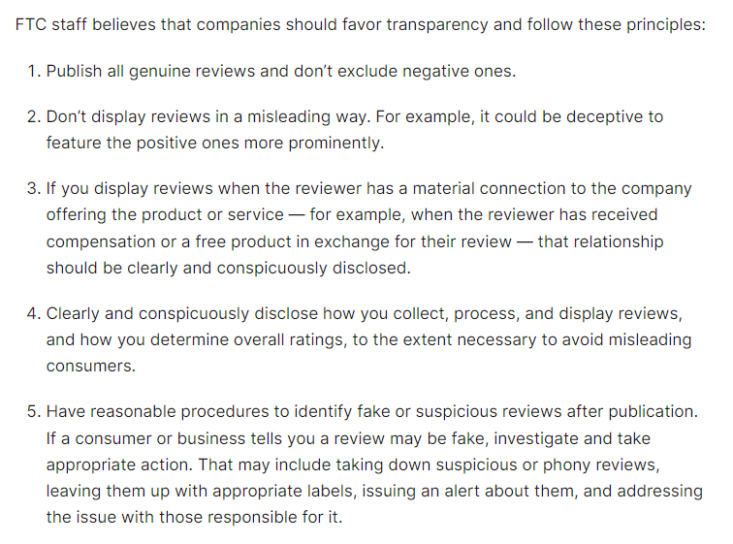 The Consumer Review Fairness Act was passed by lawmakers to stamp out the practice of businesses preventing consumers from leaving honest reviews, but review gating had fallen into a grey area. This act was intended to stop businesses from issuing contracts to prevent negative reviews, or threatening legal action against reviewers for being less than complimentary.

Cultivating exclusively positive reviews by identifying only those customers who had a positive experience with pre-screening, or by selecting only the best reviews to appear on a business website, was deemed unethical and against some platform guidelines, but wasn’t explicitly illegal. That was until the Federal Trade Commission (FTC) updated its framework and signaled its willingness to take on brands suspected of review gating.

The new FTC guidance for marketers clearly states that businesses shouldn’t only ask for reviews from those likely to give positive feedback. It also says that you shouldn’t exclude negative reviews nor display positive reviews more prominently.

The FTC issued the fashion retailer Fashion Nova with a $4.2 million fine in January 2022 after it was found to be selectively displaying only positive reviews on its pages. The FTC says this is done to deceive the consumer, which is illegal.

What are the risks of review gating?

In the same way that a slew of bad reviews can tank a restaurant or ruin a service business, customers leaving negative comments about your business on the multitude of review sites available to them can seriously harm your reputation.

For many businesses, the perceived benefit of not having to worry about risking a bad review being shared publicly outweighs the potential penalties that come with being found out for review gating.

One issue with this (over and above the lack of compliance with review site guidelines and the FTC framework) is that responding to negative reviews online can actually be beneficial.

Not only do negative reviews provide you with valuable insights as to where consumers want you to improve your products or services, but responding to negative reviews also demonstrates a commitment to customer care and tells other reviewers that their feedback matters.

If you do indulge in review gating, you could be subject to a fine from the FTC, in addition to action by review platforms, such as removing your reviews or flagging up suspicious activity to viewers.

Is review gating allowed on Google?

No, Google does not permit review gating. If your review profile is found to have gated reviews, Google may go as far as removing all reviews that you’ve accrued, not just the ones that it suspects of being gated.

So, what’s the right way for local businesses to request a review on Google?

To ensure you avoid review gating, these templates don’t mention reviews. Instead, they ask for feedback, which is the best way to get an honest response. As long as you or your reputation management platform follow this first email up to request a review from everyone (yes, including those people with negative feedback, no matter how mean they sound), your business should be swimming in legitimate and justly-earned stars in no time.

Jamie Pitman
Jamie heads up BrightLocal's content team, ensuring we produce insightful articles, research and resources that enable businesses and SEOs to get even better results in local search.
See all of Jamie's articles (106) Follow Jamie on Twitter