At the beginning of November 2021, Google announced that it is rebranding Google My Business as Google Business Profile. The name change isn’t major news in itself as the product has undergone a few name changes over the years—most notably, the switch from Google Places to Google My Business back in 2014. However, with the latest rebrand, there’s also a number of changes to how businesses will manage their listings on Google.

The biggest change is the forthcoming retirement of the Google My Business app for single listings (Update: this has now been discontinued as of July 2022). Going forward, local businesses will no longer be able to access and manage their listings in the app. Instead, they’ll rely on a control panel which appears when they enter their business name into Google Search. From here, listings managers will be able to do anything that’s possible within the app: update business information, add photos, publish Google Posts, etc.

For businesses managing multiple locations—including agencies working with local clients—not much has changed. These users will still have access to the app, which is now called Business Profile Manager. There are also hints that Google will invest more resources into features and functionality for businesses managing multiple listings, but no big reveals have been made yet.

Major changes from Google always inspire a lot of chatter within the local SEO community, and this update has been no different. Plenty of local SEO experts weighed in with their take—many of which we included in our blog post covering the changes. Some experts viewed it positively, some were more skeptical, and some were left with many unanswered questions.

While the local SEO community was a tad divided, it’s worth recognizing that local SEO professionals make up a small fraction of people who use Google My Business. So we were keen to see how different types of Google My Business users feel about the rebrand, and if they were even aware of these changes in the first place?!

We set out to answer these questions by polling over 500 BrightLocal customers, including local SEO professionals working in agencies or as consultants, marketers working in-house at multi-location businesses, and small business owners themselves.

So what did we find out? 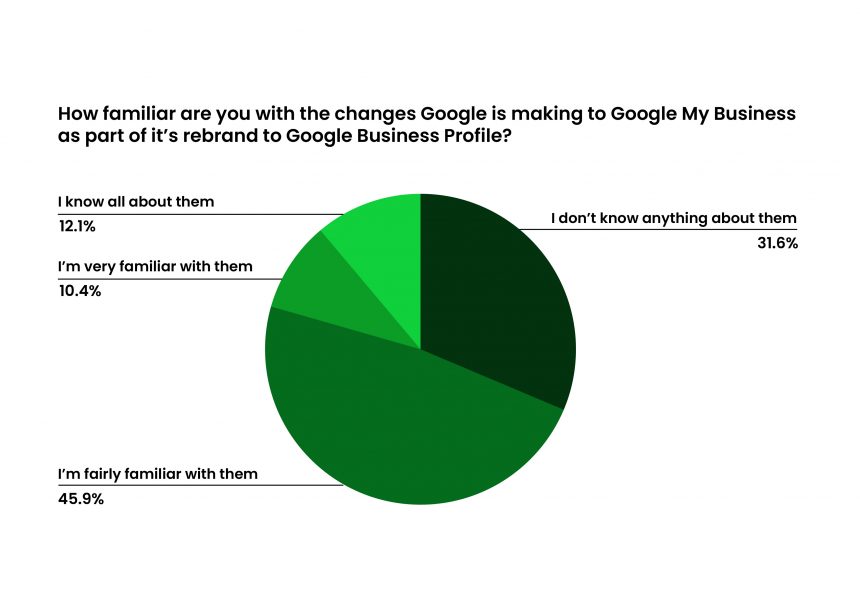 32% feels particularly high given how integral this Google product is for any business marketing itself online. What’s more, it could be argued that BrightLocal customers are typically in the know and invested in their digital marketing efforts. So arguably the average local business owner is even less likely to be aware of these changes. Extrapolating out, it’s fair to posit that millions of business owners who have been using GMB have no idea about the changes.

22% of respondents felt that they were either very familiar with the changes or knew all about them.

46% of respondents felt that they were fairly familiar with the changes.

Local businesses were the most unaware of the changes

Within the poll, we asked what type of business participants worked in. Segmenting this data down by business type we can see that local businesses are the least in the know. 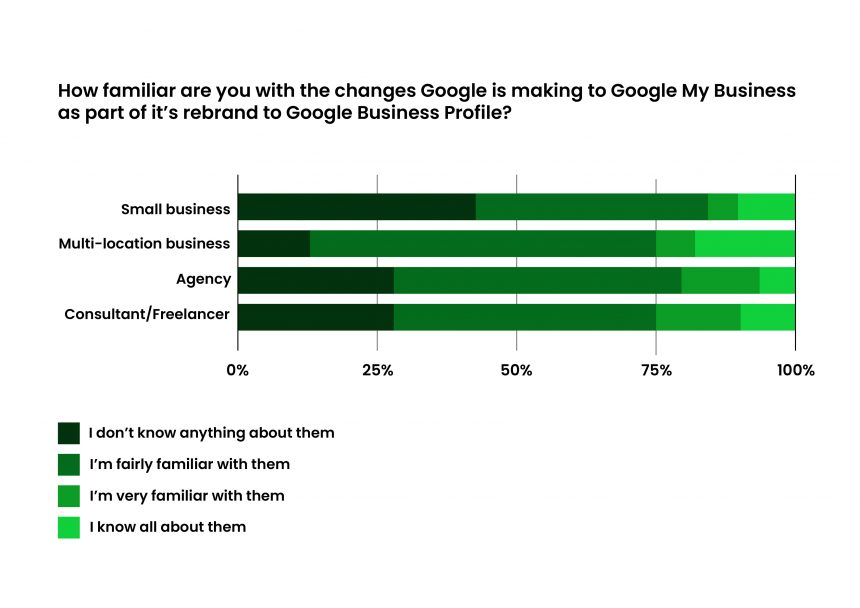 42% of small local businesses were unaware of the changes and only 12% were very familiar or knew all about the changes.

Only 15% of marketers at multi-location businesses weren’t aware of the changes.

28% of agency professionals and consultants didn’t know about the changes.

Next we wanted to know how people felt about the changes. We excluded responses from anyone who wasn’t aware of the rebrand. 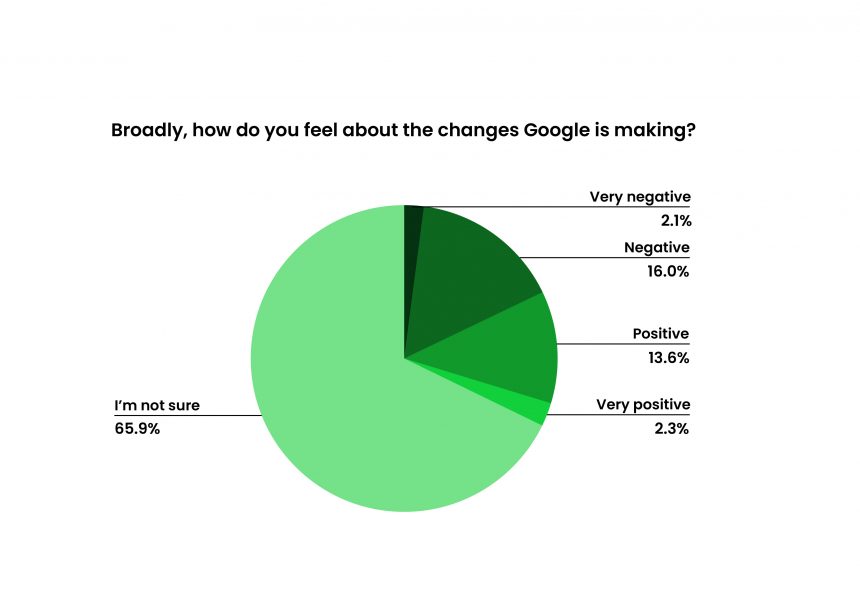 The overwhelming majority (66%) said they weren’t sure how they felt about the changes.

Interestingly, the split between negative and positive sentiment from respondents who did have an opinion was fairly even.

Overall, only 2% of respondents consider the changes to be very negative.

There can often be a knee-jerk negative reaction within the SEO community to any search-related changes made by Google. Google rewriting page titles is a recent example of this. But this data seems to suggest that people aren’t immediately going into panic mode and claiming that the sky is falling. It would seem most people are waiting to see how this plays out before making any kind of judgement.

Not only are small local businesses the most unaware of the changes, they’re also most undecided when it comes to viewing the changes positively or negatively. 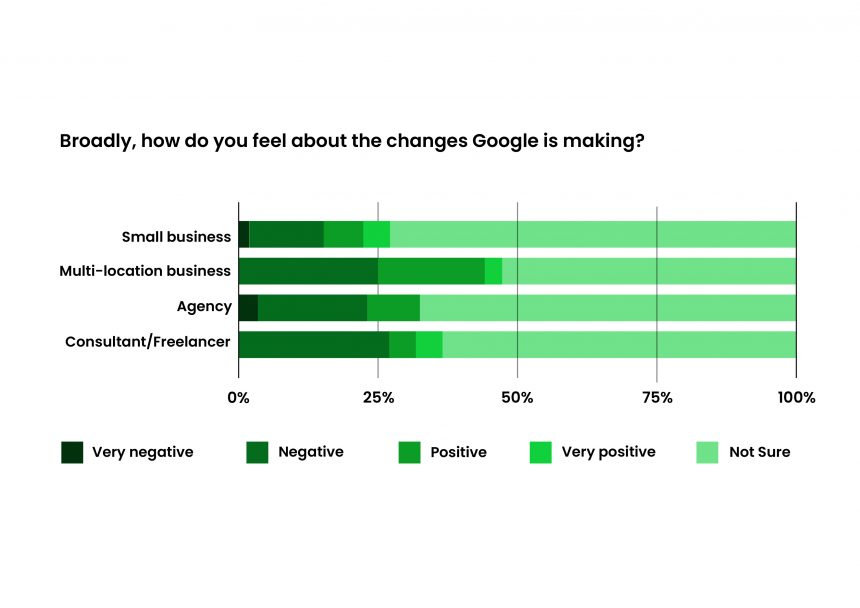 73% of small local businesses weren’t sure how to feel about the rebrand. Given that the changes are more significant for local businesses, it could be the case that they’re waiting to see what impact they experience over time before reaching a conclusion.

Google was initially unclear about how these changes will affect agencies and consultants who work with local business clients. Their first announcement only discussed the changes in relation to businesses managing a single listing or multiple listings.

Google later clarified that agencies would still be able to make use of Google Business Profile— which is going to cause significantly less disruption—but it’s still interesting to see that agencies and consultants were more likely to view the changes as negative than positive.

When grouping these two segments together, the data shows that 24% of agencies, consultants, and freelancers have a negative view, compared to only 13% with a positive view. 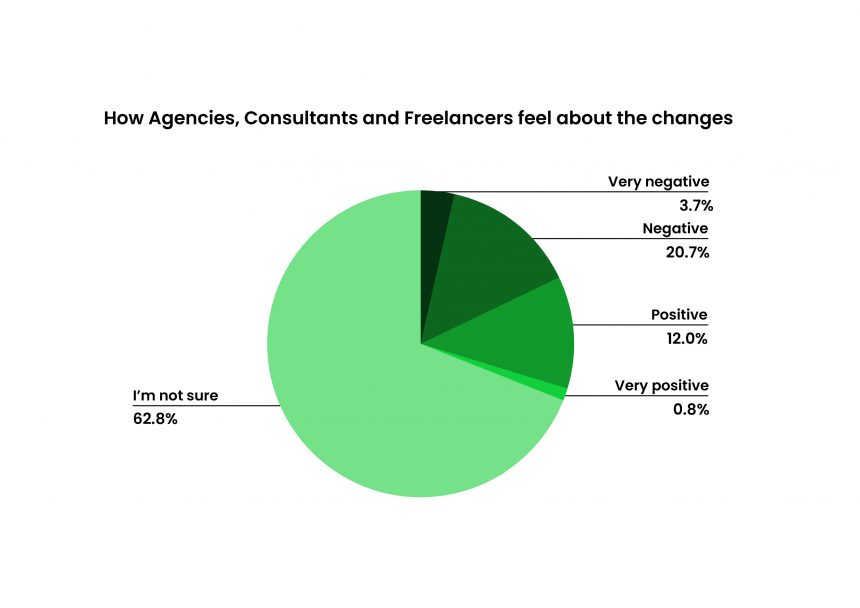 People are generally unfussed about the name change

What’s in a name? Not much it seems as only 12% of respondents felt like the name change would have an impact on their business. 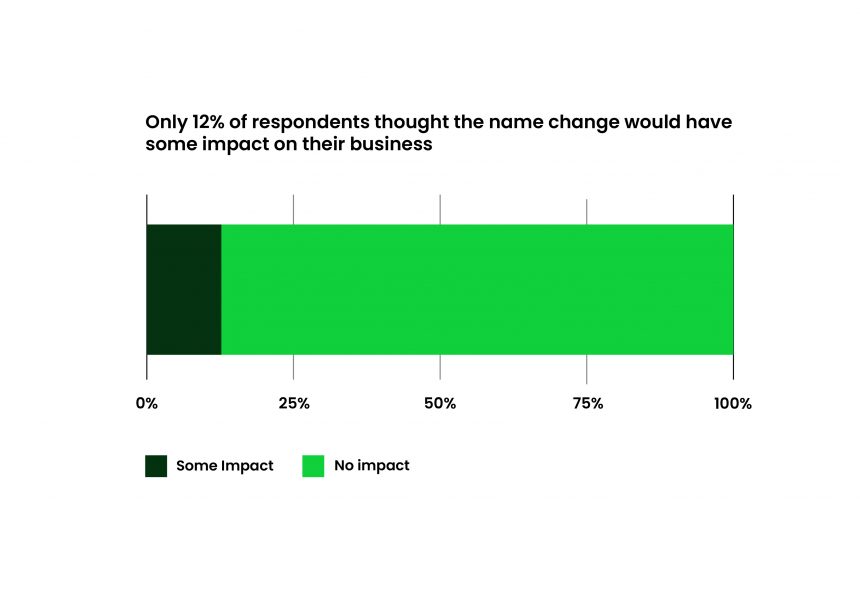 For businesses, this makes sense. The name of the product isn’t really that important when it comes to the day-to-day management of listings. But surprisingly, to me at least, agencies are even less fussed about the impact.

Only 4% of agency respondents and 3% of consultants considered that the name change would have some impact.

At BrightLocal, the name change is definitely going to have an impact—we have a tool called Google My Business Audit after all! There’s also many more places that Google My Business is referenced across our website and product. We also rank highly in the search results for a number of GMB-related keywords. 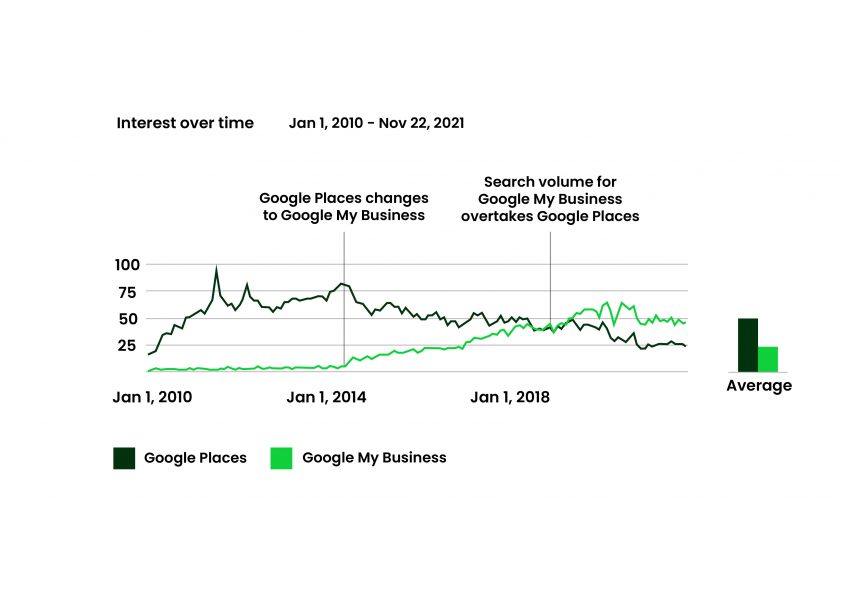 My assumption is that agencies and consultants are likely to be in a similar position to us—they have services and content that refers to Google My Business, and will need to decide if and when they are going to make changes. Additionally, client education is a common ongoing struggle for agencies and consultants working with small businesses, so a new name could create confusion. But it seems we’re one of the few businesses out there who are experiencing an impact from the name change.

On the surface, the changes are clearly most drastic for small local businesses. They’ve lost access to the Google My Business app and are now going to be fully reliant on managing their listings in the search results.

However, only 10% of small local business respondents believed losing access to the app would have an impact on their business. And, only 10% viewed relying on in-SERP listing management as having an impact. 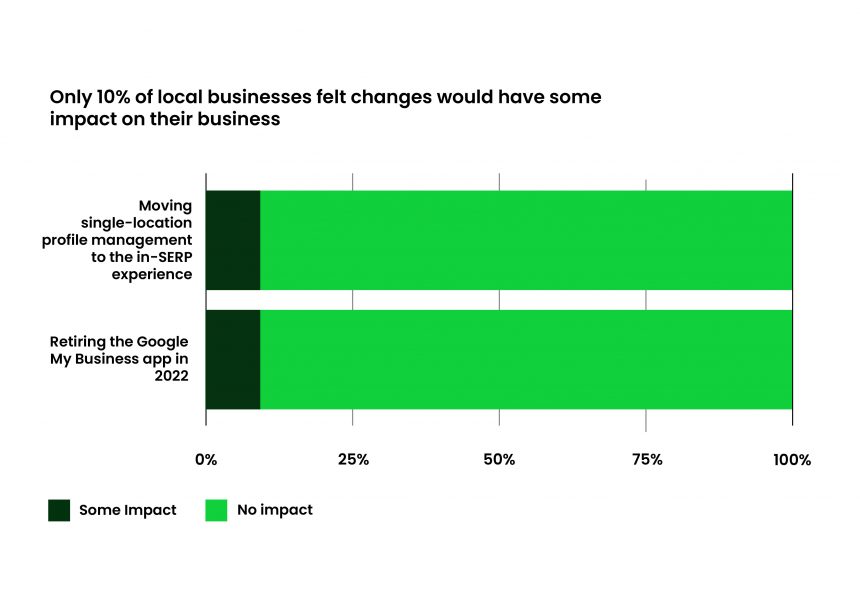 It’s worth noting that the in-SERP editing for GBP is not new. Businesses have been able to edit their listings in Google Maps and Search since August last year. So many local businesses might already be doing it this way.

Reflecting on all of this data, the biggest takeaway is not how people feel about the changes—time will tell whether this is a good thing for businesses of all types—it’s the fact that a third of businesses who responded had no idea about the changes.

As I alluded to earlier, our customers are likely more in the know than the average local business, which means that it’s possible that millions of businesses are completely unaware that things are changing. Hopefully these businesses will learn to adapt quickly and the changes will actually help make management of their Google Business Profile easier than ever.

Kristian Bannister
Kristian is BrightLocal's Director of Product and Marketing. He'll pop up on the blog to let our audience know about big things happening at BrightLocal and in the local SEO industry. Kristian draws from a decade of SEO experience and has spent the last few years working in SaaS companies.
See all of Kristian's articles (29)

Update Nov 5, 2021: Search Engine Land has reported that “if … you are a local SEO that manages a number of businesses, you will still continue to use an ...