How Car Dealerships Are Speeding Ahead with Google My Business

Our recently released Google My Business Insights Study uncovered a wealth of data (from no less than 45,000 businesses) on how consumers find and interact with businesses via their GMB listings.

While it was interesting to see trends appearing over the 16-month period analyzed, some of the biggest surprises came from seeing which industries were getting the most interactions through GMB.

With this in mind, we decided to do a little digging into the 8,000,000+ data points and perform industry-level analysis on some of the 36 industries we covered in the study.

First up, car dealerships, which, as you’ll see below, are generally killing it in GMB. Read on to find out how trends around car dealerships and GMB have changed over time, and to get an idea of the kinds of activities that are helping them achieve this.

For those of you new to GMB Insights terminology, here are some definitions, straight from Google:

Direct search: A customer directly searched for your business name or address in Google search or Google Maps

Discovery search: A customer used Google search or Google Maps to search for a category, product, or service that you offer, and your listing appeared. 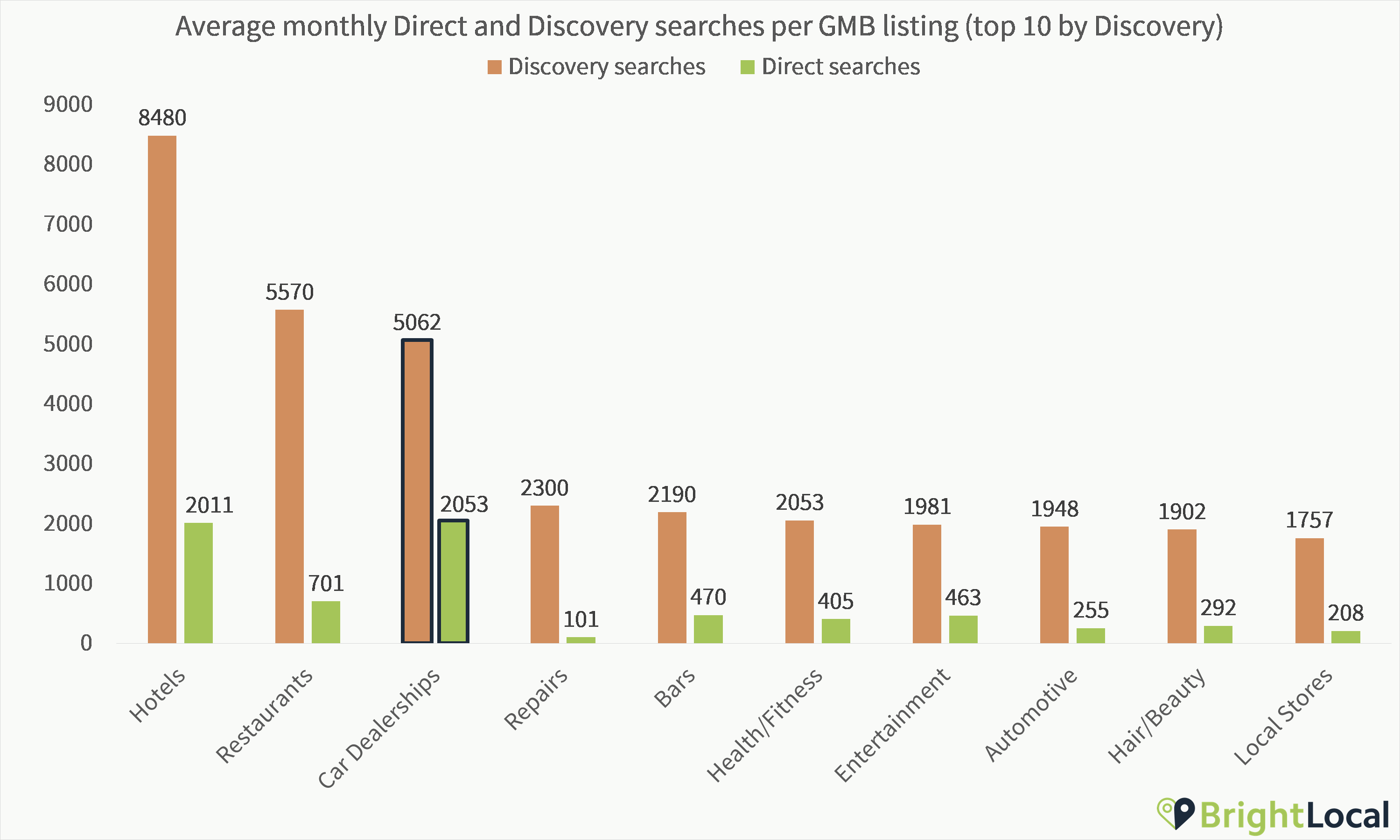 Here we see that, although hotels and restaurants dominate discovery searches (more on this soon), they are very closely followed by car dealerships. In fact, none of the remaining 33 industries even come close to these three giants of GMB when it comes to discovery searches.

Over the Sept 2017 – Dec 2018 period analyzed, we can see a fairly gradual improvement in the number of discovery searches the average car dealer appears in.

Looking closer, though, we see that direct searches are comparatively stable until August 2018, which saw a huge 49% increase from July that remained until holiday seasonality kicked in (this change is also seen in discovery searches).

August 2018 saw a core algorithm update release from Google, so my hunch is that this update somehow improved how reliably car dealership direct searches returned accurate GMB listing results. Around this time there was also an update to GMB Insights that allows Google to include more places where customers find you.

Do you know something else that happened in the car dealership industry that might have resulted in this increase? Let me know in the comments below!

Views on Search and Views on Maps for Car Dealerships

Again, just so there’s no room for doubt, here’s what Google means when it says ‘Views on Search’ and ‘Views on Maps’ within Google My Business Insights:

View on Search: A customer found the business via Google Search, including local pack results from search.

View on Maps: A customer found the business via Google Maps. Looking at this chart of the top 10 industries in the study, ordered by Views on Search, we again see the average car dealership delivering, even above restaurants.

One contributing explanation for this is that car dealers are in that sweet spot between ‘spread out’ and ‘commonly searched for’.

The average car dealer has far less local competition than the average restaurant, and Google knows that a searcher is also likely to be more willing to travel further to a car dealer than a restaurant.

This also leads to search terms in which the geo-modifier is broader than, say, a restaurant. For a car dealership search you’d be more likely to search by county than town, while the reverse is true for a more competitive, localized industry like restaurants.

This all means that ultimately the average car dealership is going to be returned in results for more localized searches than restaurants. I use restaurants as an example, but really the same could be said for any business with lots of local competition.

There’s also the consumer behavior behind car purchase to factor in: buying a car involves a lot more research, and lot more browsing, and therefore a lot more clicking on car dealership websites.

Looking at the average monthly Views on Search and Views on Maps for car dealerships, we see a broadly similar picture over time, suggesting that the two search types don’t differ a great deal and that the biggest modifier is changing consumer behaviors throughout the year.

For example, it makes sense to me that more car dealerships are sought out on the run-up to and during summertime, as this is when people are most likely to take a road trip (though those with insider knowledge of car purchase trends might be able to provide a more nuanced theory).

We can of course assume that the overall spike in January is due to an uplift from the seasonal downturn (coupled with purchases resulting from salary bonuses), but this disparity between search types suggests that this is the result of a change in technology rather than behavior.

We can also explain the March spike by pointing to another Google algorithm update, but what happened in January to cause the average car dealership to suddenly appear in lots more Views on Search than Views on Maps? I’d be fascinated to learn what you think.

While there are now a whole host of different ways searchers can interact with your Google My Business Listings (including reviews, Q&A, menu views, and more), the three core actions that lead most frequently to a conversion: Website clicks, Phone calls, and Directions requests.

These interactions all represent genuine interest in your business, so it’s no surprise that Google highlights them in GMB Insights. 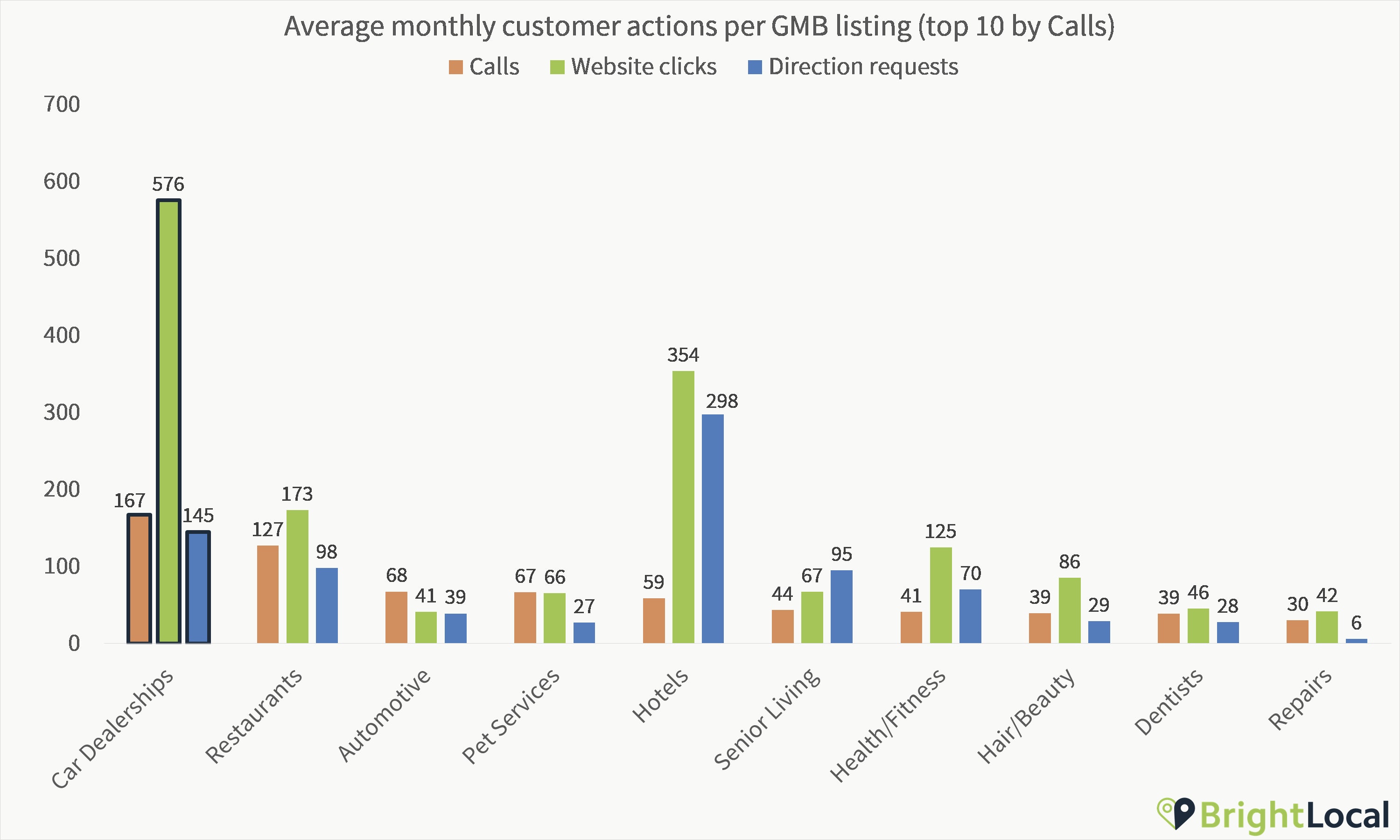 The average car dealership is clearly leading the pack when it comes to customer actions. Although this industry doesn’t receive the most driving directions, it’s a winner in clicks and calls. In fact, according to our study the average car dealership receives an astonishing 222 more clicks per month than its nearest competitor in that category, hotels.

To explain this we can point to the fact that a search for a car dealer is inevitably a search for cars, and only so much of the stock info can be presented via Google My Business. This means that a great deal of GMB listing views will result in the searcher clicking through to the website to see the cars available.

Another factor certainly worth mentioning, though, is that car dealerships tend to be big investors in local search. With county-wide competition fierce and the average order value so high, it behooves them to take their Google My Business listings seriously.

So the first step to achieving GMB success like a car dealership: take local search seriously! 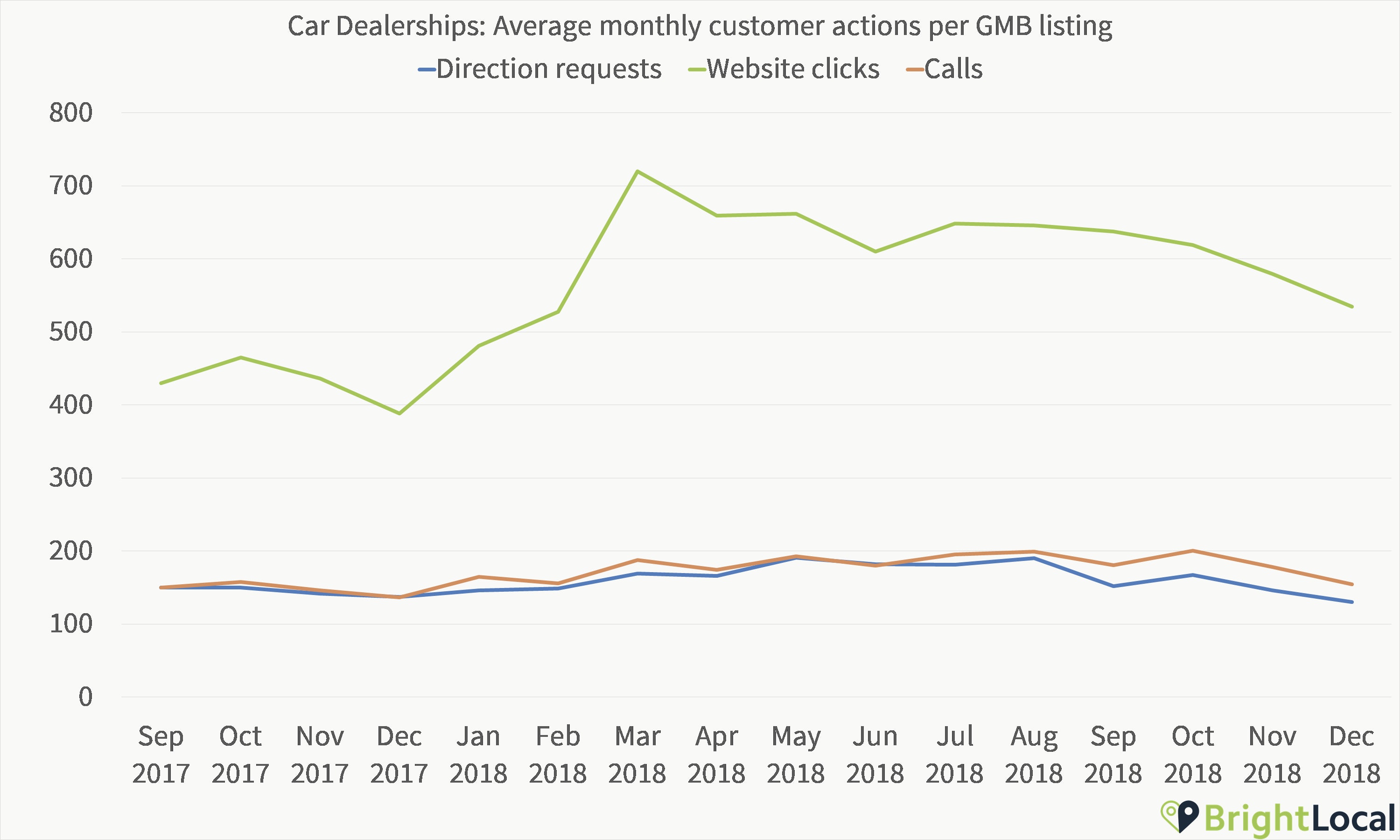 Again, the large spike in actions in March could feasibly be put down to the effects of an algorithm update, potentially presenting more reliable local results (and therefore more local businesses) for local searches. However, it’s worth noting that we don’t have March 2017 data included here, so there’s an outside chance it’s a seasonal thing affected by consumer behavior rather than changes in technology.

What can’t be denied, however, is that the above chart shows an industry that clearly invested in Google My Business profile optimization in 2018 and have reaped the benefits of using features like Google Posts, photos, Q&A and more to boost clickthroughs.

Time of Calls for Car Dealerships

While looking at the most popular times for calls to car dealerships doesn’t really tell us anything from an SEO perspective, it’s certainly useful information for any car dealership owner wanting to know when best to have their staff man the phones.

As for the most popular day of the week for calls to car dealerships from Google My Business, they were fairly evenly split, with only Monday, Saturday, and Sunday showing any deviation from the norm.

Although it doesn’t quite stand out in this chart, year-on-year improvement in website clicks is very impressive. For car dealerships, website clicks jumped 39% while for the average industry in our study, the figure was a comparatively low 39%. This overall growth shows that, as found when we compared small business websites to Google My Business, paying attention to both the destination after the click and the local search result before it are very important.

If your or your clients’ business is in a similar position to car dealerships (infrequent purchases, spread-out competition, high-cost inventory) then the above shows us that investing in maintaining and boosting GMB performance is definitely worth your while.

The increases in searches, website clicks, and views on search and maps last year show that this particular industry is taking GMB very seriously, and likewise Google are recognizing that that investment in time has to be paid back in the form of new features and more dynamic elements. If you’re not making GMB a priority for your business, now’s the time to start.

If you’ve not read the full Google My Business Insights Study yet, I’d urge you to put some time aside and check it out now, whatever industry you’re in.

About the author
Jamie Pitman
Jamie heads up BrightLocal's content team, ensuring we produce insightful articles, research and resources that enable businesses and SEOs to get even better results in local search.
See all of Jamie's articles (125) Follow Jamie on Twitter

Short Names Come to Google My Business: Have You Reserved Yours?

[UPDATE: November 19th, 2019] Short names now appear in the ‘About’ section of GMB, so they’re more visible than ever before. Wouldn’t you prefer to share your Google My Business profile with a neat, punchy, and business specific URL? Well, if you’re finding yourself nodding then read on, because Ben Fisher is here to explain… Read More