Update – May 15th, 2020: Google has confirmed that the return of reviews is picking up pace. In a quote for Search Engine Land, a Google representative said,

We’re now publishing user reviews and photos in all countries and the vast majority of business categories to help people get helpful up to date information about the places around them. We expect to publish a growing number of user contributions as time progresses.”

As a response to the outbreak of Covid-19 and the resultant closure of swathes of local business across the world, in late March of this year Google took the (in my opinion) wise decision to temporarily block the publication of new business reviews on Google My Business, as business staff no longer working would be less available to respond to them.

At the time of reporting this, we noted that it was “not yet known whether these reviews will be made visible once Google lifts the restrictions.”

Well, now we have the answer. Google is starting to bring your reviews back (but not particularly in a big way just yet).

It would certainly seem that way, yes. As Google My Business Product Expert, Jason Brown mentioned in an April 7th Local Search Forum thread, he had been told by Google that “they planned on publishing reviews that were posted after March 20th”.

This is backed up by other reports we’ve seen online (and for ourselves). In particular, this heartening, and ongoing, thread on Local Search Forum shows that the reviews being newly published are actually backdated to the date they were originally submitted by the reviewer – meaning that it’s very much worth your while to keep generating reviews now (more on this later).

To firm this up, Google’s own page about limited GMB functionality due to Covid-19, updated in mid-April, now states the following:

Which industries are seeing their reviews come back?

As the above quote from Google states, reviews are returning by “country and business category”. But which categories are starting to see reviews first?

The aforementioned Local Search Forum thread also shows business owners, agencies and experts all pitching in to discuss which industries are seeing reviews being published for them.

Seeing this, I thought: well, BrightLocal monitors businesses and reviews as part of its Reputation Manager services, so why not take a look at what that’s seeing?

[Just as preface to the below: this should not be considered detailed ‘research’ in the way BrightLocal is well known for. I’m not making any strong hypotheses or aiming to come to firm conclusions – merely taking a peek under the hood to see what the engine’s doing].

We looked at a total 5,500 BrightLocal customers’ GMB profiles (500 for each of our internally-organised categories based on groupings of official GMB primary categories) to see how many had had reviews published since April 21st. We felt that this was a long enough time period to see new reviews appearing since Google had started publishing them.

This is what we discovered:

While we found that only 4.5% of all 5,500 GMB profiles checked had had reviews published during this period, it’s important to note that almost all of those came from the automotive (2.8%) and restaurant industries (1.3%).

The numbers are so low across the other industries that I’d say, with the exception of the broader ‘general’ (i.e. ‘none of the above’) industries, they could be anomalies and are likely not worth drawing any firm conclusions from.

A closer look at our internal data even suggested that car dealerships may not have been particularly affected by the Google review freeze in the first place (if you work with a car dealership and have seen reviews steadily flowing in and being published over the last couple of months, let us know in the comments below). However, it’s obviously important to note that the reviews rollback applies to both countries and industries, so you might not be seeing reviews in your country just yet.

Here’s a great example of the breadth of reviews coming in for car dealerships – one potentially fake (one star, no content, minimal reviews, no full name, no avatar) and one specifically talking about service during the pandemic. 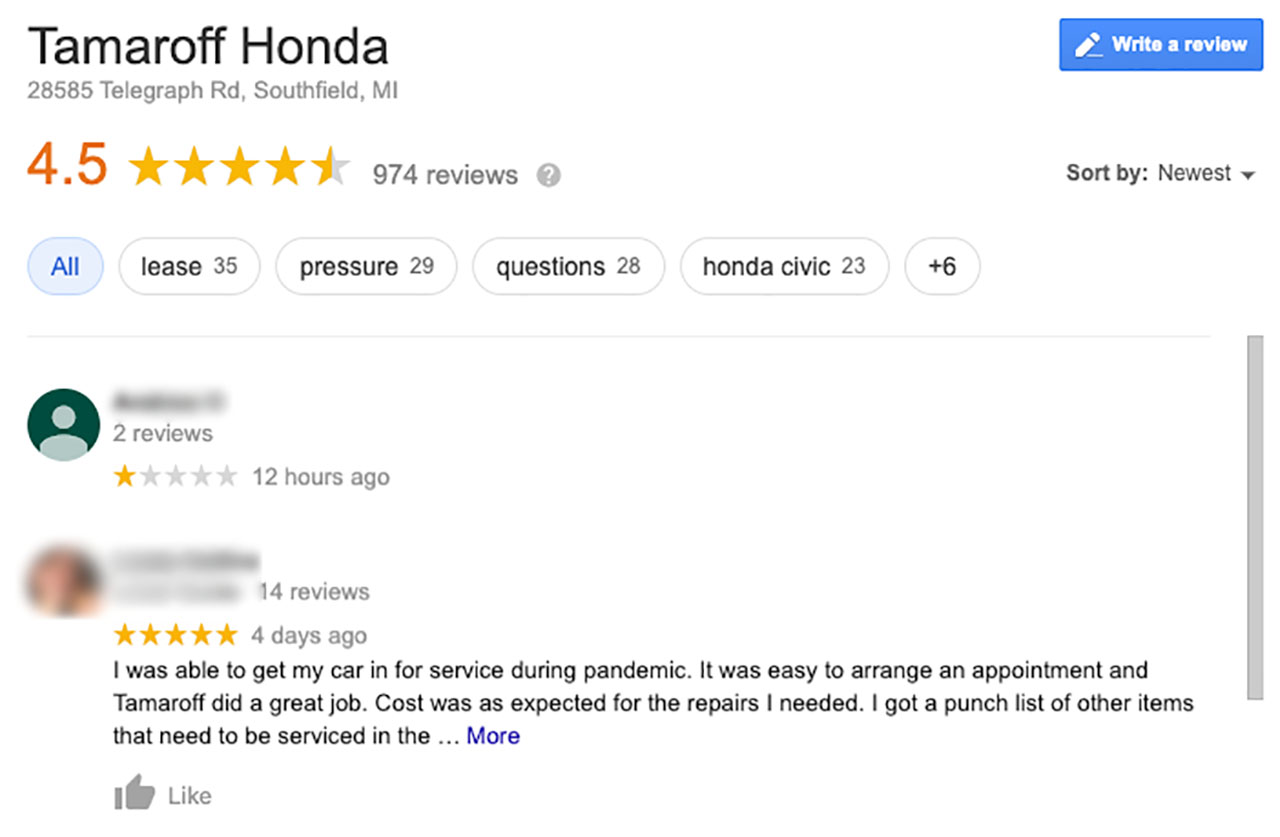 As I’ve said, this is simply a cursory glance at what our data’s showing and certainly not a foolproof, fully-realized research project, but even with that proviso it feels fair to say that if you’re in the restaurant or automotive businesses, you should be chasing new reviews like always. In fact, I’d say that, regardless of this data, all local marketers should be doing that anyway…

Should you be asking for reviews?

As Google continues to roll out publishing new and backdated reviews across regions and industries, my best advice to you is to keep trying to get those reviews coming in.

Why? Well, for a start we know that, when they’re back in your industry and your region, they’ll be backdated so if you’ve been putting the work in to get reviews but your competitors haven’t, you’ll see a huge boost in your rating (and likely your rankings) all of a sudden.

Secondly, consumers have more spare time than ever and are more focused on supporting the businesses they love. An email push to get their reviews could be just the thing you need to ensure you’re back on top once you can open your doors again.

Have you seen reviews return to your or your client’s business? Let us now the details in the comments below!

Jamie Pitman
Jamie heads up BrightLocal's content team, ensuring we produce insightful articles, research and resources that enable businesses and SEOs to get even better results in local search.
See all of Jamie's articles (116) Follow Jamie on Twitter

It’s a tough time for everyone, but local businesses and their suppliers are going to be some of the hardest-hit by the outbreak of Covid-19. However, it’s not all doom ...

There’s no denying that these are hard times for local businesses around the world, with many being forced to shutter or adapt quickly as measures are put in place to ...

Covid-19 has undoubtedly disrupted the local landscape – shuttering many businesses worldwide, and changing ways of working for those staying open. We wanted to find out the challenges our users ...